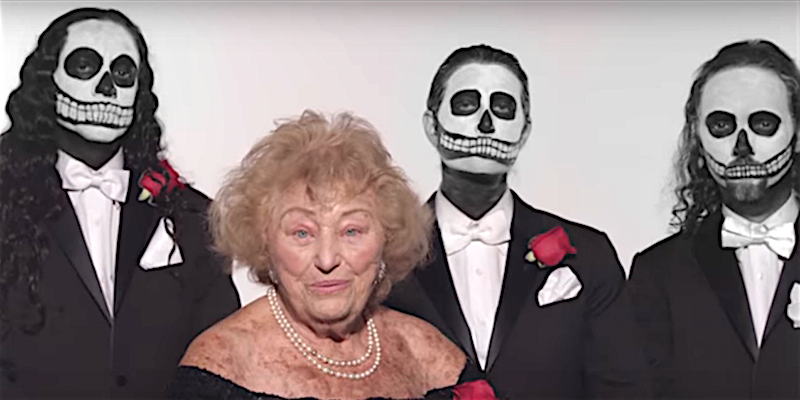 She fled the Holocaust and subsequently composed music for some iconic singers, but now 96-year-old Inge Ginsberg is known as “Death Metal Grandma.”

The New York Times has unveiled a short documentary on the fascinating Ginsberg, who grew up in Austria. Just prior to World War II, she escaped the Holocaust by fleeing to a refugee camp in Switzerland. She would eventually move to Los Angeles with her husband, and together they would go on to compose music for Nat King Cole, Doris Day and Dean Martin.

Ginsberg, who now spends her time between New York and Switzerland, continued to write lyrics and poems in her older age, and when a musician friend named Pedro Da Silva read them, he told her they sounded like death metal lyrics. Ginsberg went on to form the metal band TritoneKings with Da Silva and other musicians. While the music is heavy, it’s not exactly death metal. However, Ginsburg’s lyrics are quite heavy in nature, dealing with some of the struggles she’s endured and witnessed through the years.

A few years ago, Ginsberg and her band released a video for a song “Laugh at Death.” They’ve also performed on Switzerland’s Got Talent and even auditioned for America’s Got Talent.

Watch the full New York Times documentary on Inge Ginsberg below, followed by the music video for “Laugh at Death.”