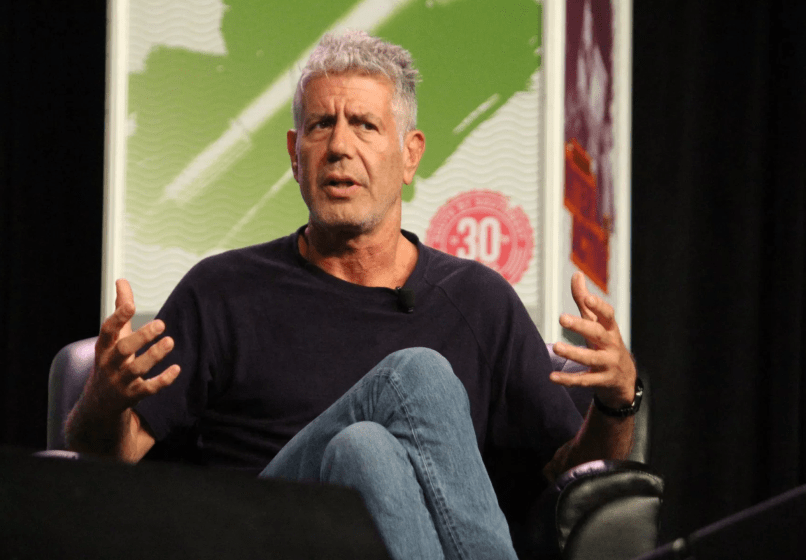 It’s been just over a month since the suicide of author, chef, and TV personality Anthony Bourdain. One of his final interviews, an in-depth discussion with Maria Bustillos of the newly-launched blockchain-based web magazine Popula, was conducted back in February and has just been published. The conversation covered a wide array of subjects, with Bourdain giving some characteristically blunt comments about many sociopolitical matters.

Prior to his death, Bourdain was dating Asia Argento, one of the women at the center of the New York Times article that exposed Harvey Weinstein. As such, Bourdain was an outspoken supporter of the #MeToo movement and a staunch opponent of Weinstein. While he and Bustillos were discussing how the only way to stop the immoral acts of powerful people is to publicly humiliate them, Bourdain imagined the former A-list producer forced to eat at a low-rent restaurant in Scottsdale, Arizona. It was his way of explaining that while he’d love “to see him, you know beaten to death in his cell,” it’s actually more satisfying to watch horrible individuals suffer the consequences.

That’s when he detailed how he imagined Weinstein might actually meet his end:

“My theory of how he goes is uh, he’s brushing his teeth in a bathroom, he’s naked in his famous bathrobe, which is flapping open, he’s holding his cell phone in one hand because you never know who on the Weinstein board has betrayed him recently, and he’s brushing his teeth — he suddenly gets a massive fucking stroke — he stumbles backwards into the bathtub, where he finds himself um, with his robe open feet sticking out of the tub, and in his last moments of consciousness as he scrolls through his contacts list trying to figure out who he can call, who will actually answer the phone.

And he dies that way, knowing that no one will help him and that he is not looking his finest at time of death.”

Bourdain’s cutting remarks weren’t reserved  for those with criminal sex scandals in their history, either, as he also took aim at Bill Clinton. He said that while the former president didn’t deserve to lose his job over his infamous affairs, he wouldn’t have voted for him again. What’s more, he called both Bill and Hillary Clinton “monstrous” for attempting to discredit the women who came forward alleging infidelity. Noting that “that would not have flown today,” he called the Bill Clinton “A piece of shit. Entitled, rapey, gropey, grabby, disgusting…” Bourdain continued,

“…and the way that he — and she — destroyed these women and the way that everyone went along, and, and are blind to this! Screamingly apparent hypocrisy and venality. How you can on the one hand howl at the moon about all these other predators. And not at least look back. OK, let’s say, well, it was all consensual: powerful men, starstruck women, okay fine, let’s accept it at its most charitable interpretation. Fine. He is a very charming man, I met him, he’s fucking magnetic.

As is she. When you’re in the room, you think wow, she’s really warm and nice and funny. But the way they efficiently dismantled, destroyed, and shamelessly discredited these women for speaking their truth is unforgivable.”

On more current political topics, Bourdain had words for both Donald Trump and Bernie Sanders fans. Regarding the latter, Bourdain said that though he saw eye to eye with the Vermont Senator — “I agree with him on just about everything, it’s not like he’s not talking sense, almost always he is” — he found his more vocal supporters “largely insufferable.”

He also thought Sanders would have been “a dream opponent for Trump,” because our “deeply racist society” isn’t ready to let a Jew have the top job. “…You wanna talk about getting out the vote?” he said. “You’re gonna get a lot of fucking people out who don’t plan to vote who’d vote just to keep the Jew outta the White House.”

As for the man who did take the White House, Bourdain didn’t see Trump supporters as imbeciles who were duped into voting for someone who doesn’t care about them. Instead, he believed they knew exactly what they were doing when they elected someone as unfit as Trump: Burn it all down.

“I’m so merciless. I’m so…burn the temple down. How could it be worse? This is exactly what Trump voters thought. And I talked to them! I said, you know this guy doesn’t care about you, right? He’s taking a big steaming dump on a golden toilet right now, he’s a New Yorker, he’s never changed a tire in his life and you voted for him.

They’re not foolish, they don’t believe that. They recognize an anarchist. They recognize somebody who is likely to pull down the whole rotten temple that they despise so deeply that they will repeatedly shoot themselves in both feet for the pleasure. Of seeing all of these craven scumsucking pig-dogs who betrayed them year after year and let them down and mocked them…”

Bourdain had plenty more to say about a range of topics in the two-hour discussion, all addressed with the sort of well-traveled respect and world-weariness you’d expect from a guy with his life. He talked about the power of money, the groundwork of revolutions, raising his daughter, and even the New York Times opinions section. A lot of ground is covered, and you can read it all at Popula.