Before Drake, Migos, or Rae Sremmurd, there were Three MC's and One DJ 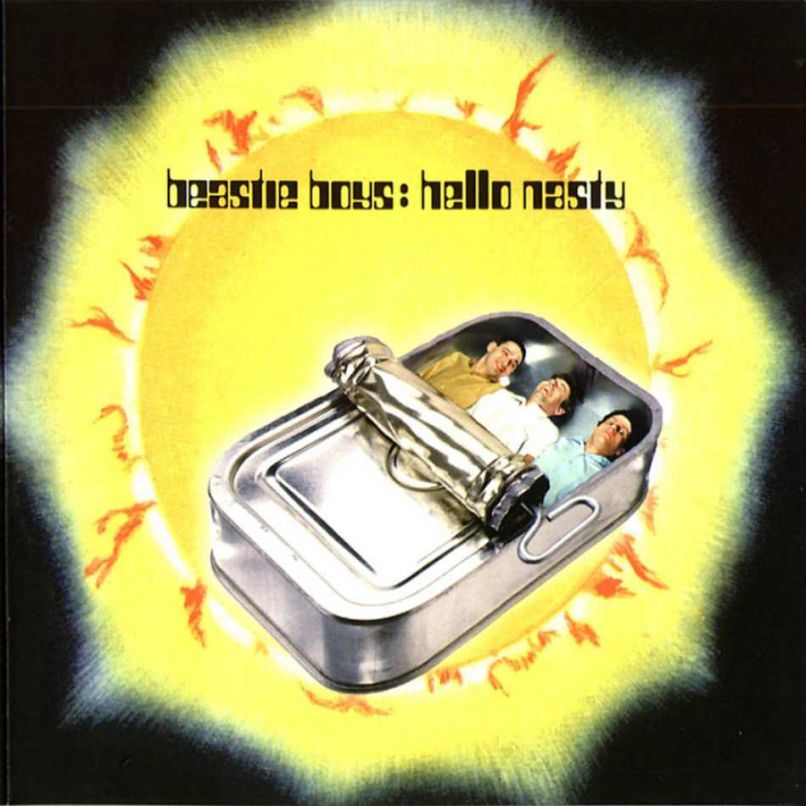 Picture this. It’s the turn of the century. Drake is 12 years old and won’t be cast in Degrassi for another two years; Adonis is but a twinkle in young Aubrey Graham’s eye. Modern hip-hop superstars Quavo, Offset, and Takeoff are seven, six, and four years old, respectively. Spotify is still a decade shy of coming to fruition, Napster just a year away from blowing up everything, and, believe it or not, most people still use (gasp) CDs as their preferred method of listening.

The year is 1998. Among other things, it’s the year that Beastie Boys released their smorgasbord of a fifth album, Hello Nasty, which — astonishingly enough — came out 20 years ago to this day (feel old yet?). And while it seems impossible to imagine a world in which modern hip-hop stalwarts like Drake and Migos aren’t dominating streaming charts with their excruciatingly long projects, it was the Beastie Boys who were the original curators of the playlist/album/mixtape hybrids that have since become the standard modus operandi when it comes to hip-hop releases.

Hello Nasty clocks in at 67 minutes. It’s fucking long. On top of that, it has moments of slog. Not a bad slog, or even a boring slog, by any stretch of the imagination. In fact, it’s probably the album’s down-tempo lulls that make it such an enjoyable listen in the first place. But it’s complicated. It’s an album that — if played in the company of less musically obsessed listeners — would probably get switched off after a few tracks. Because let’s be honest: how many of us are chomping at the bit to research and give context to the album’s dozens upon dozens of samples? Still, the Beastie Boys’ attention to detail is exactly what makes Hello Nasty — and all Beastie Boys albums, for that matter — so enjoyable in the first place.

The first three tracks on Hello Nasty move seamlessly from a pairing of Run-D.M.C.’s “Sucker MCs” and Kool Mo Dee’s “At the Harlem World” to Kurtis Blow’s “Christmas Rappin” and finally Pete Rock’s “The Basement”, and that’s only in the first nine minutes! From there, the group take listeners on a frenetic journey, weaving in and out of sample-laden ballads and original tracks.

There are also instances that leave even the most devout record-bin divers scratching their heads. The steel vibrations injected into “Body Movin’” by Amral’s Trinidad Cavaliers on their rendition of “Oye Como Va”. The use of Igor Stravinsky’s 1910 ballad “Danse Infernale De Tous Les Sujets De Kachtcheï” in the hook of “Electrify”. How about the funk aesthetics of “Dr. Lee, PHD” lent by Lee “Scratch” Perry himself, off his seminal original “Dub Revolution” or the subtle inclusion of drum & bass on “Flowin’ Prose”. Often the album’s samples are interlaced among each other — “Hello Nasty” loops The Stovall Sisters’ soulful vocals with the Jazz Crusaders’ bass lines — with pinpoint precision. The album’s list of oddities and relics goes on and on, and what Hello Nasty may lack in brazen vigor, it more than makes up for in the Beastie’s stringent attention to detail.

Similar to how artists like Drake, Migos, and Rae Sremmurd have used pop-culture cross references and glove-fitting samples to popularize their gargantuan projects, Beastie Boys had an undeniable knack for amalgamating a paten of samples and serving it up as a 101 course in music history. But there’s an X-factor within the album. Because any subject, even music history, has the potential to be incredibly boring or, conversely, wildly imaginative given the right professor. Enter: Professor Mix Master.

Hello Nasty is the Beasties’ first project created with the help of “renowned DMC champion” Mix Master Mike. The album’s final single before its release — “Three MC’s and one DJ” — was the world’s foray into the eclectic world of the Mix Master and, more importantly, the new four-man dynamic that would come to define the album. “Hey yo, Adam, what’s up? This is Mix Master Mike. I’m calling from Sacramento,” plays a voicemail recording in the interlude. “Um, ah, I’ve been wanting to hook up with you, um, maybe on some tracks. I’ve got some sick shit right here, if you could,” he continues as the phone starts to sputter out. “I hooked my turntables up through a wah-wah pedal. It’s called the tweak scratch.”

Without Mix Master Mike, Hello Nasty would be a project filled with some of the best uncovered treasures a 22-track double-album could possibly offer, but it would be a project lacking in consistency, lacking in centrality, lacking in spunk and fervor. It’s the Mix Master’s signature turntablism that gives rise to the Beastie Boys’ off-kilter tonality and precarious bars. Whether it’s tweak scratches, wah-wah-pedals, or simply bringing his full-frontal disc-jockey perspective to the creative ideation behind the album, Mix Master Mike was the only force that could turn one of hip-hop’s most in-depth history lessons into the most enthralling dance party one could ever be a part of from the comfort of headphones. The Beastie Boys themselves proclaimed that “nobody can do it like Mix Master can,” and they’re not wrong. Hello Nasty is the ultimate party playlist, and rather than simply click shuffle, they upped the ante with one of the most staggering DJs in turntablism history.

So, while Beastie Boys have little in common — stylistically speaking — with contemporary counterparts like Drake, Migos, and Rae Sremmurd, they all follow a similar blueprint when it comes to their releases. All have been overshadowed by larger-than-life singles (in the Beasties’ case, “Intergalactic”, “Sabotage”, and “Fight for your Right”). And all released longer-than-necessary records that were more akin to giant mix tapes than they were original “albums.” However, where the emphasis in contemporary hip-hop is placed on framing massive, chart-topping singles, Beastie Boys could not be more polar. The aim of an album like Hello Nasty — with its densely layered samples — was to act as a modern purveyor of music’s vastly overlooked history. Beastie Boys were originals, setting release trends well before their time, and we can only hope that the artists carrying their torch spend anywhere near as much time digging into music’s rich past.

It makes for one hell of a ride.