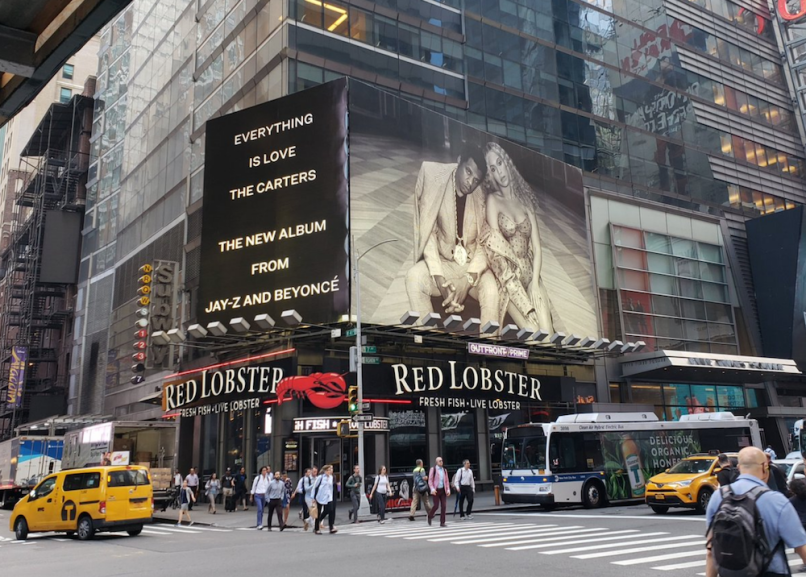 JAY-Z and Beyoncé's Everything is Love ad above Red Lobster

All hail The Carters! This past week, an ad for Beyoncé and JAY-Z’s surprise collaborative album, Everything is Love, was put up in Times Square. But the billboard didn’t take up just any old random spot in the New York City neighborhood — it was erected right above a Red Lobster.

The billboard ad’s placement is no happy coincidence. As any member of the Beyhive will recall, the R&B queen notably name-dropped the chain restaurant on her stellar Lemonade hit “Formation”. “When he fuck me good I take his ass to Red Lobster, cause I slay,” she revealed on the track, detailing how she chooses to reward her hubby for his above average services under the sheets. The line led to a 33% boost in sales for Red Lobster in 2016.

Beyoncé is a marketing genius pic.twitter.com/yaoWIr8cpZ

Everything is Love, of course, is closely tied to Lemonade, as it serves as the last installment of The Carters’ trilogy of releases, which also includes JAY’s 4:44 album from 2017. The three records document the power couple’s loving married life, struggles (in particular JAY’s infidelity), and reconciliation.

In related news, The Louvre has created a 90-minute guided tour based on the music video for Everything is Love’s “Apeshit”. The clip, helmed by Ricky Saiz, was filmed on location at the famed Paris museum back in May.

Everything does in fact appear to be all about the love now… as well as clever marketing and some very good memes based on JAY’s now-infamous jet skiing adventure.