Film Review: Don’t Worry, He Won’t Get Far On Foot Takes a Wry Look at Recovery 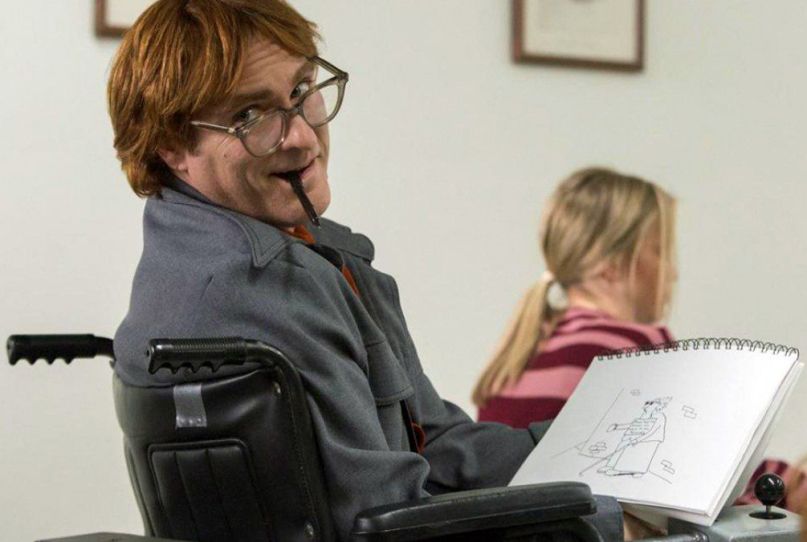 Portland-based cartoonist John Callahan was a self-professed detractor of political correctness – a recovering alcoholic who became quadriplegic as the result of a drunk driving accident, and used that pain and his raw, tactless sense of humor as fuel for his work. No subject was taboo, from cartoons about Klansmen loving the warm feeling of dryer-fresh sheets to a man walking past a wall warning of patrolling lesbians. Even his own disability was fodder for humor, as Callahan used his acerbic wit and endearingly absurdist art style to needle at his own insecurities and the sociopolitical tensions of the time.

Gus Van Sant has worked on a version of Callahan’s story (based on his memoir Don’t Worry, He Won’t Get Far on Foot) for decades, ever since Robin Williams approached him for the role. Although that window has tragically closed, Van Sant has finally adapted the story with Joaquin Phoenix in the role. The results are occasionally moving and heartfelt, but delivered with a milquetoast distance that mutes some of the film’s uplift.

As Van Sant movies go, Don’t Worry… falls strictly in the feel-good realm of Good Will Hunting and Finding Forrester, with a soupcon of Milk’s ‘70s period flavor. Like some of his most iconic films, Van Sant gravitates toward outcasts and misfits, drawing them with an empathetic eye even as they make mistakes and alienate those around them. Callahan fits squarely within this mold, Phoenix playing him with the kind of dynamism that comes naturally to him at this point in his career. At this point, the actor could do this in his sleep: it’s an effortlessly exemplary performance, full of nuance and un-telegraphed tics, the sedate sensibilities of a comic laughing at his own pain.

Of course, questions already abound about whether Phoenix, an able-bodied actor, should be playing Callahan at all, a controversial issue that raises many complicated questions. On the one hand, actors with disabilities (much like members of other marginalized groups) should absolutely be given the chance to tell their stories with authenticity, rather than being used as an acting exercise, or a chance for able-bodied actors to seem ‘brave.’ On the other, Callahan’s pre-accident life is an integral part of the story, requiring an actor who can do both. Roles like these are prime opportunities for talented, disabled actors to get a bigger platform to tell their stories, and it’s tough to determine where the line falls here.

Callahan himself might well have been entertained, or even annoyed, by the discussion; when asked about criticism of his work, he famously said, “My compass for whether I’ve gone too far is the reaction I get from people in wheelchairs, or with hooks for hands…like me, they are fed up with people who presume to speak for the disabled. All the pity and patronizing. That’s what is truly detestable.” That said, it’s an important, complicated conversation to have, and Don’t Worry…, like it or not, is part of that discourse (one in which disabled critics and viewers should absolutely have a voice).

For whatever it’s worth, Don’t Worry…  is far more concerned with exploring Callahan’s quest for sobriety than it is interrogating his experiences as a quadriplegic. That’s the aspect of his life that seems to bring him the greatest challenges; the scene where he gets his powered wheelchair, for instance, is played as a quirky moment of liberation, Callahan giddily zipping around the hospital within seconds. Meanwhile, he struggles mightily with sobriety through the rest of the film. His self-improvement comes about through the twelve steps of Alcoholics Anonymous, which provide a convenient framework for the film’s own recovery narrative. Like clockwork, the audience travels with Callahan through each step (though not necessarily in the right order, thanks to Van Sant and editor David Marks’ non-chronological storytelling), from acceptance to forgiveness to sponsorship. Van Sant captures the little tragedies that happen along the road to recovery with tremendous sensitivity.

It’s that vulnerability that helps wallpaper some of Don’t Worry…’s deeper structural problems, though it doesn’t overcome them completely. While the movie’s fragmented approach is a welcome attempt to shake off the clichés of this sort of inspirational biopic, it can be more than a little confusing to figure out exactly where in Callahan’s chronology the film has traveled between moments. (The secret is paying close attention to Phoenix’s cavalcade of tangerine wigs and subtle changes in facial hair, not to mention the vast array of oft-ridiculous ‘70s outfits.) This places Callahan’s journey at an emotional distance from the viewer, keeping them at arm’s length from the man who Van Sant wants audiences to understand so deeply.

While time is a flat circle for Don’t Worry…, it’s the performances that keep the film anchored in broader emotional truths about the process of healing from trauma. Phoenix is impeccable, but the film shines when he gets to bounce off Hill’s groovy, openly gay sponsor. Donnie is predictably wry, but he’s most effective when cutting the bullshit and speaking plainly with Callahan about the difficulties of sobriety, taking a firm but fair hand to sponsorship. Black’s small but vital role as the man responsible for Callahan’s disability, and the extent to which he might want and deserve forgiveness, makes his brief appearance a standout.

Unfortunately, the women of the film don’t fare so well. Mara’s Annu is little more than a talking head meant to sexually reward Callahan for ‘overcoming’ his disability. When other women crop up in the film, they’re either background players in Donnie’s support group offering platitudes about recovery, scolds behind desks standing in Callahan’s way, or sexy nurses who happily acquiesce to Callahan’s requests for sexual contact. Sure, Phoenix and Hill get nice, meaty roles with plenty of pathos, but the male-centric nature of Callahan’s world ends up turning the film’s female characters into the kind of stock biopic helpers Van Sant’s ostensibly trying to avoid.

Don’t Worry, He Won’t Get Far On Foot is an incredibly mixed bag, a complicated story told with an approach that would have made more sense as a follow-up to Good Will Hunting in the ‘90s. What Van Sant has delivered is sweet, well-meaning, and occasionally grasps at profundity, but even its strongest performances don’t quite overcome its herky-jerky structure and sense of emotional distance. Try as they might to avoid turning this story into dated inspiration porn, Don’t Worry… ends up feeling like the kind of saccharine, inelegant feel-good film Van Sant would have turned out in the ’90s. For a filmmaker with such a varied palette, that’s a disappointing regression.

Previous Story
Troye Sivan and Ariana Grande bust a move in new video for “Dance To This”: Watch
Next Story
Death Cab for Cutie are haunted by an ex on new song “I Dreamt We Spoke Again”: Stream
Popular
More Stories
[fu-upload-form form_layout="media" title="Submit Your Photo"][input type="hidden" name="ugc" value="1"][/fu-upload-form]