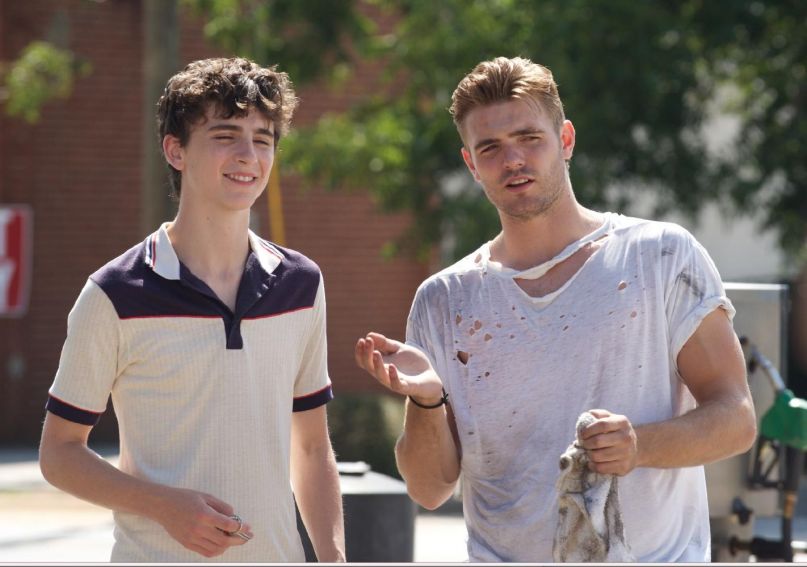 Every town has its stories. Think back to your own days growing up, the tales that were passed around by word of mouth: those awful urban legends about the lonely man at the end of the block; the crotchety old lady with the beehive hair, toiling away at her lawn; the silent hunk who always kept the neighborhood groovy with his precious boom box. They all had varying origin stories, depending on who you spoke to, and that rampant speculation was part of the thrill to hearing each legend. You never knew if they were real or not — hell, you kind of didn’t even care — it’s that you knew them and could then tell them to another unsuspecting listeners yourself. This type of oral history is the conceit behind Elijah Bynum’s directorial debut, Hot Summer Nights, a brazen anti-coming-of-age thriller that oozes with all the right confidence, chutzpah, and passion.

Set in Cape Cod, Massachusetts during the Summer of 1991, the film follows a seemingly quiet and timid teenager named Daniel (Timothée Chalamet), who’s sent upstate for the season by his mother in what he even admits is a total cliché. At first, things are rough, as he’s caught between the locals and the snowbirds, both of whom he has no ties or connections to spiritually. That all changes, however, when he befriends his co-worker at the beat-up gas station he works at, a small town hunk named Hunter Strawberry (Alex Roe). With looks that scream Jason Priestley and a heart that belongs to James Dean, Hunter’s a total rebel with a cause: he sells weed to all the kids and tourists. Eventually, he takes Daniel under his wing, and the kid opens up, using his smarts to think of ways to expand their business, which is always a good idea in their industry.

The two also enjoy their summer as they thrive at being a pair of New England George Jungs. They race toward midnight at drive-ins watching crowded screenings of Terminator 2: Judgment Day, they eat all kinds of crap at the local carnival, they escape into Street Fighter 2 at the local arcade, and they race around in their respective muscle cars. This isn’t War Dogs, though. Daniel and Hunter don’t roll around, toss out dollar bills, and tear through merchandise — they chase their summer dreams as any one of us would at the time. Hunter has a summer fling with the daughter (Maia Mitchell) of a slick-back cop (Thomas Jane), while Daniel finds first-time love with Cape Cod’s dream girl McKayla (Maika Monroe). Everything is dandy until it’s not, and that’s what makes Hot Summer Nights such a stirring and vivid presentation. The stakes are real.

(Interview: An Afternoon with Filmmaker Elijah Bynum: The Prodigy Behind Hot Summer Nights)

Those stakes are what elevate the film from being strictly a chewy exercise in nostalgia. Save for a handful of time-stamped scraps of pop culture, most of which have already been stated above, Bynum doesn’t really indulge in the iconic accoutrements of the era. Hell, the soundtrack isn’t even what you might expect, leaning less on obvious hitmakers like Paula Abdul, Damn Yankees, Janet Jackson, and C+C Music Factory, doubling down instead on more timeless fare such as Can, David Bowie, The Zombies, The Shangri-Las, and Linda Ronstadt. As such, some might see this as a pseudo-spiritual sequel to Greg Mottola’s 2008 cult hit Adventureland, and that actually wouldn’t be too far of a reach, but this is a more hyper-stylized affair, thanks to Bynum’s flavored use of external media and era-heavy fonts that break down the various summer months.

From beginning to end, you never get the feeling that Bynum doesn’t know what he’s doing, and that says a lot given the film’s hefty running time. At 120 minutes, Hot Summer Nights has plenty to work with, and it does, wheeling out its characters, settings, and mysteries with due diligence. To play into the aforementioned idea of urban legends and neighborhood myths, it’s told from the point of view of a bystander, who narrates the bookends and a few scenes in between, and while some could argue it’s a distracting motif, it actually allows Bynum the agency to build his town up. Similar to Stephen King, whose beloved Portland, Maine even makes an appearance here, Bynum uses the narrator to embellish the little details, going off on tangents about the fates of certain townies that add to the magic and expand the town’s horizons and mythology.

Also wonderful is the inspired cast that Bynum has assembled. Chalamet, coming off a big win at this year’s past Sundance with Call Me By Your Name, is an absolute natural as Daniel, and his transition from loner to steely drug dealer is palpable. Roe could sell the socks off a sweaty slob with those pair of eyes and that smile, and his big brother spirit is alive and well throughout. His 5th Wave co-star Monroe, who was tragically roped into starring in last year’s miserable blockbuster Independence Day: Resurgence, comes back swinging as McKayla, reminding us why we all fell in love with her during 2015’s It Follows and 2014’s The Guest. On the periphery is Jane, whose salient performance as a benevolent cop/father is yet another breezy win for the veteran actor, in addition to bold work by the ever-superb William Fichtner and the oft-underrated Emory Cohen.

Having been born and raised in Amherst, Massachusetts, one can see how Bynum might feel at home with Hot Summer Nights. Despite this being shot in and around Atlanta, Georgia, he’s still playing in his backyard story-wise, driving down the same mental backroads he likely cruised through as a young kid himself. In fact, following its worldwide premiere at South by Southwest, Bynum even admitted how he drew inspiration from a story he heard as a teenager involving two local drug dealers, which explains why the film states it’s “mostly a true story,” though that banner likely pertains to its rousing finale using the real-life Hurricane Bob as a backdrop. Even so, Bynum brings so much personality to the table and works off so much ambition that you can’t help but feel like this guy has even more stories up his sleeve. And considering his obvious influences — Paul Thomas Anderson, for starters — they’re going to look fucking great, too.

You’ll have to take my word for it.