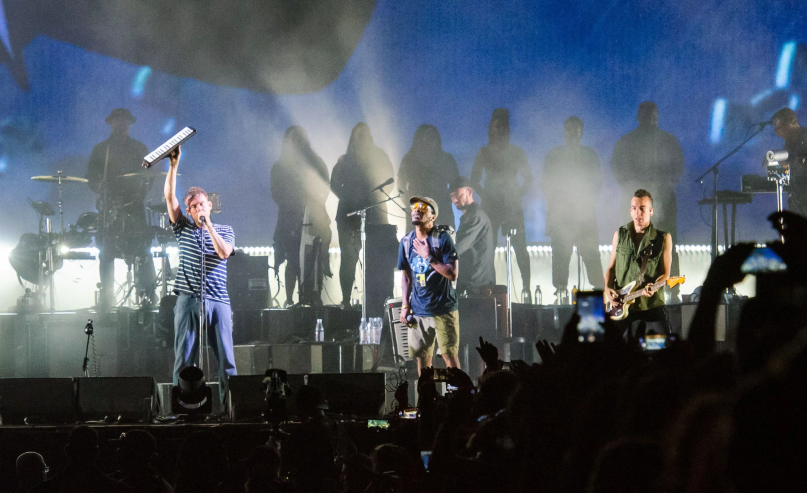 Gorillaz with Del the Funky Homosapien, photo by Ben Kaye

Saturday night marked the conclusion of Denmark’s Roskilde Festival, and it ended a bit earlier than expected. Gorillaz were forced to truncate their headlining set after rapper Del the Funky Homosapien fell from the stage during the band’s performance of “Clint Eastwood”.

The 2001 smash single was to be the closing number from the band, but they barely started the first verse before it came to an abrupt halt. Del came out to deliver his first bars and appeared to not see where the stage ended, taking a step too far and tumbling to the ground. Damon Albarn rushed over once he realized what had happened, and eventually stopped the show.

“Thank you so much for a beautiful, beautiful night,” Albarn told the crowd. “Unfortunately, we’ve had a… I don’t know yet.”

After concluding that Del would not be able to continue the performance, Albarn returned to address the festival audience. “Listen guys, it’s strange to be here, and ya know, unfortunately Del slipped down there. It’s a really weird way to end a beautiful night, but he’s gonna be okay,” he said. “We have to finish now, so thank you so much for a beautiful night.”

Del was checked out by an onsite doctor before being taken to a nearby hospital, where he’s apparently recovering well. “Thank you all for the love! I’m doing alright but will be in the hospital for a bit, the care here is outstanding though,” he tweeted. “Much love to @gorillaz for having me out and I’ll be back soon yall.”

Update – July 11th: Albarn gave an update on Del during an interview with Beats 1 Radio. “Del is in hospital still in Roskilde. He’s got seven fractured ribs and he punctured his lung on one side, lacerated it on the other. He’s gonna be fine. It was just a stage fall, and I’ve fallen off stage several times, off stages way higher than that and I’ve been so fortunate. When he fell down, I was looking at him like, come on get up there’s 80,000 people out there and we need to finish. I thought I was going to able to carry the song on. I thought he was going to be okay. But he really wasn’t. He’s gonna be alright. Bless him. It’s an awful, awful thing that I can’t quite believe. I keep playing it through my head. He will get better, he’s gonna be fine.”

Watch the fall below.

Gorillaz are next set to perform July 11th at Gurtenfestival in Bern, Switzerland as they continue supporting their latest effort, The Now Now. Their next North American leg launches in October and includes the Los Angeles incarnation of their Demon Dayz festival.