Plus, watch their accompanying videos, including one in which Pussy Riot get in a boxing match with the Russian dictator 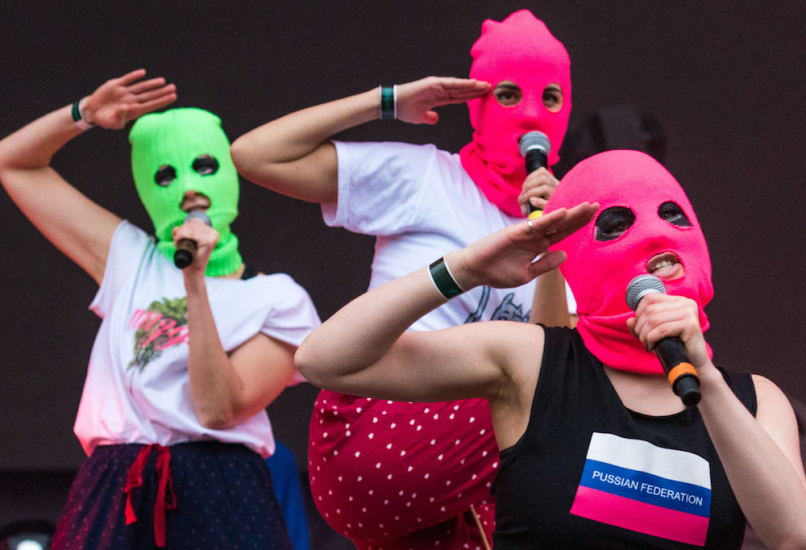 Exactly one week ago, Pussy Riot unveiled a new song called “Track About Good Cop”. The tune, along with its official clip, compared good and bad kinds of police authorities. Today, the punk outfit returns with with two more tracks and music videos, which continue to criticize Russia’s government, prison system, and law enforcement agencies.

The first, “КОШМАРЫ/NIGHTMARES”, incorporates both harsh noise and melodic moments while recounting Russia’s harsh incarceration methods — something Pussy Riot know all too well. Its jarring accompanying visual, helmed by Elizabeth Mamonova, features illustrations of Pussy Riot and various other figures.

“We demand the release of Oleg Sentsov, who has been on hunger strike for 72 days,” reads its YouTube description. It also notes the song works in a cover of Dina Vierny’s “Nightmares”.

In the second offering, “PONG!”, Pussy Riot’s infamous 2012 “Punk Prayer” protest is envisioned as a classic video game. Its strobe light-filled video includes scenes in which Pussy Riot attempt to knock out Putin in a boxing ring.

Check out both below.

Pussy Riot have reason to bring their “Punk Prayer” protest performance in Russia and subsequent imprisonment back into the spotlight. Just last week, the European Court of Human Rights condemned Russia for its treatment of the band and ordered the government to cough up about $58,000 as compensation.

Sentencing band members for “simply having worn brightly colored clothes, waved their arms and kicked their legs around and used strong language, without analyzing the lyrics of their song or the context of their performance, was exceptionally severe,” ECHR noted in a statement.