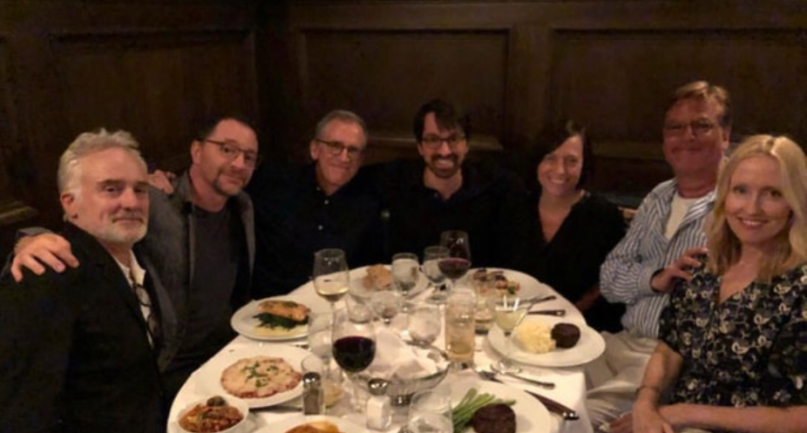 There’s been talk of a potential West Wing reboot for some time now. Now, in a photo that will only ramp up speculation, several of the show’s core cast members — including Bradley Whitford (Josh), Janel Moloney (Donna), and Joshua Molina (Will) — are seen having dinner with series creator Aaron Sorkin.

For hist part, Sorkin has admitted to having an idea for a potential reboot, which would involve casting Sterling K. Brown (This Is Us) as president. “There’s some kind of jam, an emergency, a very delicate situation involving the threat of war or something, and [President] Bartlet [played by Martin Sheen], long since retired, is consulted in the way that Bill Clinton used to consult with Nixon,” Sorkin told The Hollywood Reporter in an interview late last year.

The sticking point, according to Sorkin, is how he’d incorporate other favorite characters such as Press Secretary – turned – Chief of Staff C.J. Cregg (Allison Janneey) or Deputy Chief of Staff – turned – Matthew Santos’ righthand man Josh Lyman (played by Whitford).

NBC, which aired The West Wing’s original run in the 2000’s, is said to be intrigued by the idea and has put the ball in Sorkin’s court. Speaking to reporters in April, NBC Entertainment Chairmen Bob Greenblatt said a West Wing reboot likely would have already happened “if [Sorkin] weren’t busy doing 10 other extraordinary things.” Let’s hope he now has 11 extraordinary things on his plate.

In a recent episode of TV Party, Kristen Nelson, who played young Mrs. Landingham, joined Allison and Clint to break down the show’s seminal “Two Cathedrals” episode. Listen below.