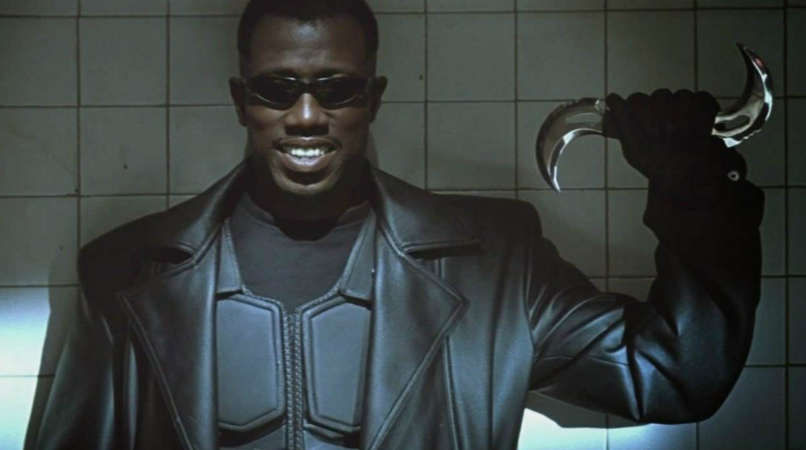 Back in 2016, Deadpool proved that an R-rated comic book movie could be a major box office draw. Two years later, Black Panther demonstrated the wide appeal of a black superhero. Twenty years before either of those films, Blade did both.

It’s not that people forgot about Wesley Snipes’ vampire actioner, as so many think-pieces argued around the release of Black Panther. Blade simply existed in a different era, one that wasn’t inundated with costumed avengers battling evil on the big screen. Yet, despite being so far removed from the current profusion of comic adaptations, the 1998 blockbuster is arguably directly responsible for it.

Before there was Blade, superhero films were one of three things: Superman, Batman, or pulp. You had your Rocketeers, your Crows, and your Teenage Mutant Ninja Turtles, but Hollywood was still terrified of going all-in on costumed heroes. The only films being made were either ridiculously campy (a la Schumacher’s Batmen) or so niche that you wouldn’t even know they were comic books unless you knew they were comic books (The Rocketeer). Blade, introduced by writer Marv Wolfman and artist Gene Colan in a 1973 issue of Marvel’s The Tomb of Dracula, fell somewhere in the middle — at least from a filmmaking point of view.

Blade wasn’t a massively popular character, not even getting his own solo series until 1994. In the early days, he was something of a cliché, though perhaps appropriately so for his time: He had an Afro, there was a forced connection to jazz, he joined gangs, and spoke in what today would likely be considered offensive ebonics. A far cry from the badass Daywalker we know and love today, so it’s hardly surprising early development on a Blade feature aimed at making a spoof. Snipes seems like inimitable perfect casting in retrospect, but Marvel’s first choice was actually — wait for it — LL Cool J. They were looking more at comedies like The Meteor Man or Blankman than the franchise dreams of contemporary failed experiments like Spawn or Steel. Once you laid eyes on those stinkers in the summer of 1997, you couldn’t blame filmmakers for wanting to steer away from the “serious” approach.

Enter David S. Goyer. At the time, Goyer was a relative newcomer with a nerd-on for comics. When Blade found itself set up at New Line, they brought the burgeoning screenwriter on to pen a goofy vampire-hunting flick. But Goyer had a different vision, a straight version that played up the inherently rich potential of the source material. Unlike so many colorless adaptations that seemed to stop thinking beyond “this looks cool on the page, so put it on the screen,” Goyer envisioned a fully established reality coinciding with our own, separated by its own set of rules and compelling characters.

This is the same approach the writer brought to what many consider the modern epoch of superhero cinema: Christopher Nolan’s Dark Knight series. Goyer penned Batman Begins and is credited with the story on both its sequels, as well as writing Man of Steel and becoming — for better or worse — an integral part of the DC Extended Universe films (yes, Batman v Superman: Dawn of Justice was him, too). Regardless of his latter output’s unevenness, Goyer’s Blade was the first to demonstrate that the four-color magazines in kids’ hands contained stories and characters worth taking seriously. The idea of placing outlandish concepts in the context of a world viewers understand is what made Iron Man such a landmark, convinced people to believe Spider-Man could swing through New York City, and how Nolan’s Dark Knight righted the ship Schumacher had scuttled. Goyer’s Blade script validated that sort of storytelling as an endeavor worth undertaking.

Fox learned that lesson well when they finally got X-Men — the movie most commonly referenced as the dawn of comic book movies’ second renaissance — off the ground just months after Blade hit theaters. Various studios had been working on bringing Marvel’s mutants to cinemas for years. Filmmakers like James Cameron and future Avengers architect Joss Whedon all took stabs at the story, but things were either too bloated or too pop culture-y for studios to follow through. It wasn’t until late 1998 that director Bryan Singer and screenwriter Tom DeSanto handed in a treatment that did one thing differently: It took the world of the X-Men seriously.

Where Blade drew parallels between classism and even racism in the dynamics of its vampire underworld, Singer and DeSanto’s X-Men focused heavily on the themes of discrimination at the core of Stan Lee and Jack Kirby’s iconic creations. Heck, Magneto’s plot isn’t terribly different from Deacon Frost’s in Blade: Humans are less than us, so let’s assert our dominance by making them more like vampires/mutants. The films have the same balance of unique action and quippy humor, even if one delivers a more blood-soaked version. No doubt filmmakers saw the leather attire of Blade (and, not long after, The Matrix) as a solution to the problem of translating the wacky X-Men costumes to the screen. Despite the clear differences between the hard-R rampage of Blade and the more “family friendly” romp of X-Men, the lifeline of the latter can be traced directly from the success of the former.

In a circular way, that line can even be drawn back to the books. Nowadays, film adaptations have a way of impacting the comic world so as to attract fans newly christened in the theaters back to the source. Not long after 2000’s X-Men, for example, the Marvel team shed their colorful comic attire for slick leather outfits. Blade started that sort of reverse influence in a big way.

Though being a Daywalker is integral to the character now, Blade didn’t originally have that distinction. Deacon Frost had bitten his mother during labor, true, but that had only given him base powers like an extended lifespan and a supernatural sixth sense. A strange story in a Spider-Man comic introduced the breadth of his Daywalker abilities in 1999, a trick comic writers are still playing today as they look to match the changes in the movie universes to the world of the books. (Just look into how Quicksilver and Scarlet Witch were retconned to not be Magneto’s children if you want proof.)

From comic to film and back to comic again, there are a lot of reasons why Blade worked. Credit the kinetic fight scenes, choreographed by master martial artist Snipes himself. Casting was also spot-on, as playing Blade could easily go down as Snipes’ defining moment. (And just think, if Jet Li had accepted the role of Frost instead of joining Lethal Weapon 4, this film would have only featured white men in sidekick roles. Stephen Dorff was still great, of course.) Same goes for director Stephen Norrington, who brought a fresh storytelling style that should’ve hinted at a long career if not for a bad experience on another comic film set, the misguided The League of Extraordinary Gentlemen, leading to his too-soon retirement. There’s also the timing, as peak-’90s cartoons had made superheroes more commonplace and improving technology made larger-scale adaptations more plausible. (Sometimes to a fault; the original Blade ending was a CGI mess, but Norrington was smart enough to know when to reel it in.)

This isn’t to say Blade is a perfect film — in fact, it’s most certainly not. But it was great, slick fun, and it succeeded where so many others failed. On an approximately $45 million budget, it brought in a global gross of over $131 million and knocked Saving Private Ryan out of the No. 1 spot on its opening weekend. It spawned a franchise that included two sequels and a short-lived TV series. Those accomplishments led studios to finally believe movies about comic book characters who weren’t household names could make them so, if only they were done right.

As the Blade filmmakers demonstrated, that meant taking the world of comics seriously. They proved that by grounding fantastical concepts in accessible realities and trusting the source material, you could lean into something as objectively implausible as a daywalking vampire slayer and present it as a believable blockbuster. So long as you approached them with consideration, style, and fun, comics could be as fertile a starting point for cinema as anything else. A decade later, you had an Oscar-winning superhero movie (The Dark Knight) and, another 10 years beyond that, a record-shattering black hero (Black Panther). Before there was any of that, though, there had to be Blade.