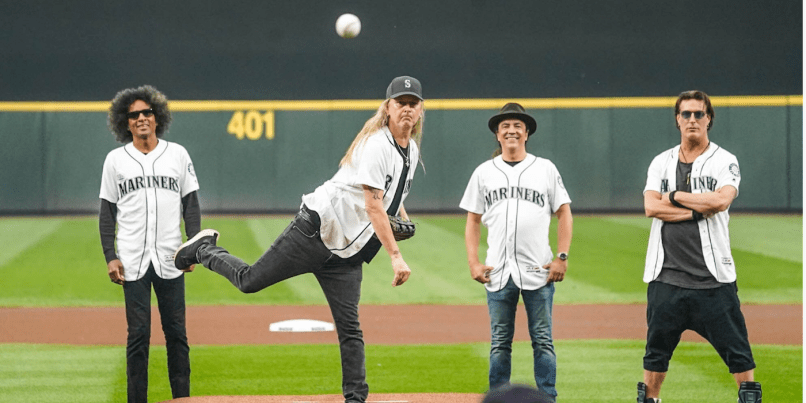 The Seattle Mariners designated last night’s game against the Houston Astros as Alice in Chains Night, in celebration of the band’s new album, Rainier Fog, which arrives this Friday. And it turns out guitarist-singer Jerry Cantrell got the night off to a splendid start by throwing a perfect strike for the honorary first pitch.

As we reported leading into the game, the band’s hometown team hosted a special night that included a listening party, a free Alice in Chains t-shirt and a copy of the Rainier Fog CD. What wasn’t known at the time was Alice in Chains’ role in the festivities.

All four members of the band were present, and all made their way to the mound at Safeco Field. Cantrell was rightfully given the honor of throwing out the first pitch, and put it right down the middle, unlike some other celebrity first pitches we’ve seen — 50 Cent, we’re talking to you!

Prior to the first pitch, Cantrell and singer William DuVall were interviewed for the local TV broadcast, and Cantrell admitted he was more of a football fan, but still put his Mariners fandom at an 8 on a scale of 1 to 10. He mentioned Mariners like Randy Johnson and Ken Griffey Jr. as players the band got to hang out with over the years.

Cantrell and company proved to be good luck for the Mariners, who scored three runs in the eighth inning to beat the Astros 7-4.

Alice in Chains will continue their takeover of Seattle today with a performance on the rotating glass floor of the Space Needle, 500 feet above the ground.

Check out the pre-game interview followed by the first pitch below. If you want to go right to the pitch, go to the 1:55 mark.