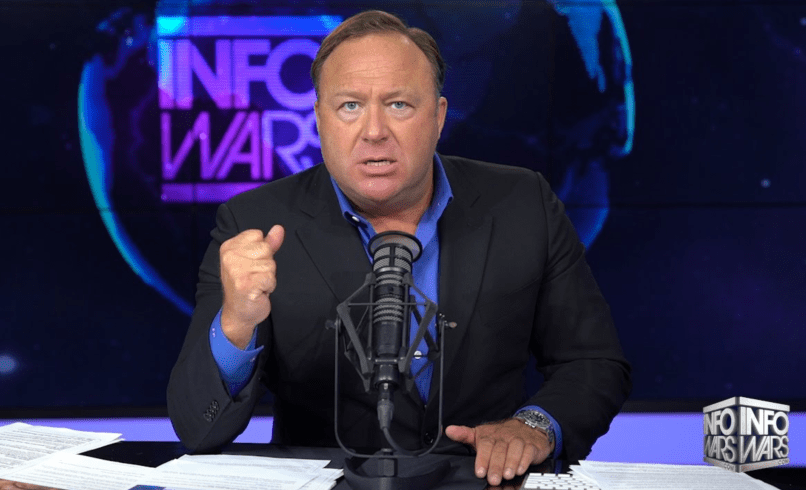 The entirety of Alex Jones’ podcast library, including his popular InfoWars program, has been removed from both Apple’s iTunes and Spotify, according to BuzzFeed News. Update: Jones’ YouTube channel has also been terminated for violating “community guidelines.”

The InfoWars founder is infamous for peddling far-right conspiracy theories, including his promotion of the Sandy Hook Elementary School shooting as being a false flag attack perpetrated by the government. He is also a proponent of the “Pizzagate” conspiracy theory, claims Stoneman Douglas survivor David Hogg is a crisis actor, and says NFL players protesting during the National Anthem are “kneeling to white genocide” and violence against whites.

As of today, Apple has removed Jones’ podcast from its platform, saying in a statement: “Apple does not tolerate hate speech, and we have clear guidelines that creators and developers must follow to ensure we provide a safe environment for all of our users. Podcasts that violate these guidelines are removed from our directory making them no longer searchable or available for download or streaming. We believe in representing a wide range of views, so long as people are respectful to those with differing opinions.”

Spotify, which added Jones to its podcast offerings last month only to be met with widespread criticism and threats of a boycott, is also ending its relationship with Jones. A Spotify spokesperson told BuzzFeed that the company’s hate content policy prohibits anything that “expressly and principally promotes, advocates, or incites hatred or violence against a group or individual based on characteristics.” The policy warns that repeat offenders will be removed from the platform.

Jones’ presence on Facebook is also taking a hit, as the social network has announced the removal of four pages associated with the host ad his shows.  Facebook said the pages were taken down “for glorifying violence, which violates our graphic violence policy, and using dehumanizing language to describe people who are transgender, Muslims and immigrants, which violates our hate speech policies.”

For his part, Jones says he’s simply “playing a character.” At least, that’s what his lawyer told a judge when Jones was embroiled in a custody battle with his ex-wife last year. “He’s playing a character,” attorney Randall Wilhite said of Jones. “He is a performance artist,” Wilhite added, likening Jones’ public persona as akin to Jack Nicholson performing the Joker in Batman.