Artist of the Month Tash Sultana on Their Debut Album, Life on the Road, and Fighting Tall Poppy Syndrome 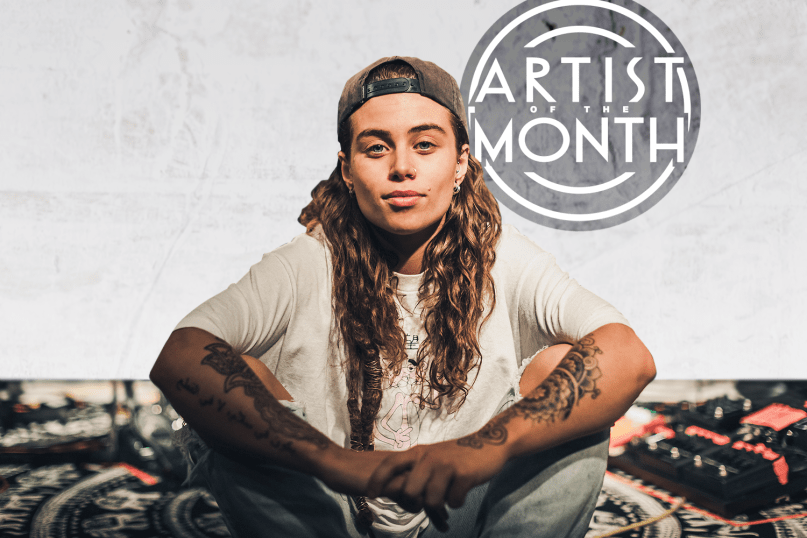 Coachella. Bonnaroo. Governors Ball. Lollapalooza. Osheaga. To some music fans, that lineup might symbolize the ultimate summer spent traveling to destination festivals. For Tash Sultana, it’s just another summer at the office.

It wasn’t so long ago that the Melbourne-based singer-songwriter and one-person band might’ve been just another face on the grounds. That all changed in 2016, when the then-21-year-old Sultana racked up more than a million video views in less than a week on the strength of a phone-shot clip of their breakout single, “Jungle”. That momentum hasn’t slowed: since that fateful upload, Sultana has notched an Australian Top 10 with the Notion EP, melted the stage at Late Night with Seth Meyers, and wowed crowds at venues and festivals throughout the United States and Europe before ever releasing a full album.

It also carried over to the American Eagle stage at Lollapalooza, where Sultana scored the plum Saturday-evening lead-in slot for nearby headliners Vampire Weekend. For the fans who’d braved the day’s punishing heat, the set came as both a culmination and a relief; alone onstage, Sultana built their set from the ground up, weaving a series of good-on-their-own loops into an overwhelming, evocative tempest whose psych-rock soundscapes swelled and disappeared and returned with thrilling surprise. By the middle of the second song or so, it was tempting to look for the ghosts of band members who weren’t there and weren’t really missed.

Standing there, coated in sweat and dust and just realizing that the sun was finally down, you got the sense that you might be witnessing the beginning of something huge, that maybe, maybe this would be one of those side-stage sets that people brag about catching 10 years down the line. Sultana, for their part, would probably agree with you. When we sat down to talk just 90 minutes before their set was scheduled to begin, Sultana exuded the easy, direct confidence of someone who knows exactly how good they are. By the time they left to take the long golf cart ride through Grant Park, I recognized another, even more thrilling aspect to that self-assurance: the sense that, with the release of their debut record, Flow State, imminent and another sold-out tour starting in the fall, Tash Sultana knows that their best is only getting better.

I’m looking forward to not being in a box anymore with an EP, because I’m so much more than that one little, tiny piece of material that I wrote a few years ago. I’m thankful for it. But that was just the key. That gave me the key and the power to unlock this world in front of me. And it’s taken me everywhere — festivals, sold-out shows. I’ve had some pretty cool experiences, and now I suppose that people are kind of listening. This is the perfect time to drop an album.

I kind of worked differently this time, because I understand how to work in that environment now. Before I wasn’t that knowledgeable in the studio world. And now I am, so the process was different. Pretty much everything that I recorded at the start I threw in the bin and started again at the end. So, I pretty much wrapped up the entire album in about a month from when I started to when I finished. I’m genuinely proud of of what I’ve written. I wrote it for me. I’m stoked with how it’s all happened. I didn’t write any songs for anybody else. You know what I mean? I produced them all. So, it’s all on me. I would change things if i could go back, but I think everyone says that, don’t they? That’s just the thing.

When I’ve sent my stuff off to get mixed and mastered, it’s come back different sometimes. And I’m just like, “What the fuck are you doing? This is not your track. Put that 25-minute guitar solo back in where it was! Don’t cut it to three minutes and shit!” But I think they just have this idea, and to them that’s probably how the song should sound, but that’s not — I wrote the song. I wrote them all. It’s not for you. Leave it.

I would go play gigs anywhere that I could. My parents would take me for quite a bit of it. And then I got this fake ID. When I was like 15 or 16, it’s saying that I was 18 and that my name was Sam. But it obviously wasn’t. That’s how I got in places. That’s how I did gigs. And then when I finished school, I didn’t want to get a job. I thought, “I reckon I can make this work the way that it is.” I don’t think that I can do another job. I’m not built that way. My mind is not sculpted to take orders off somebody.

That adjustment period is so strange. I remember hearing people talk about this and not understanding it at the time because it wasn’t happening to me. But now I definitely understand that it can be quite a little dangerous balance. I fly my girlfriend out a lot just to have that little touch of home. And me and my crew roll really, really close, and we’re friends outside of what we do anyway. The way that we’ve positioned the touring schedule is that if I go away for five weeks, I’m going to come home for five weeks. Then I have time to hang out with my friends and my family and go surfing and see my dog. That’s pretty much it.

On Miley the Dog

I broke my ribs when I was surfing. And I went to the hospital and they gave me Endone, which is like Oxy. It’s really strong pain medication. And I only took it for one day because that shit is fucked, but I ended up with a dog at the end of the day. Now, I have a dog. She’s a Kelpie; it’s an Australian sheep-herding dog. She’s cute. She’s going to be one soon, and she’s learning how to be a normal dog now. She’s a crazy motherfucker. She’s really smart, which is good and not good at the same time, actually. You tell her to do something, and she’s just like, “Why?” And my other dog is not very smart. And you tell him to do something and he’ll just do it. They’re alright.

I feel like Australia has got some of the greatest artists in the world, and sometimes we don’t get past being in the country. So, i’m pretty stoked the way things have happened for me. I always feel pressure when I go home, to be honest. Australians have this thing called “tall poppy syndrome,” if you’ve heard of that before. It’s when that one poppy grows taller than the other, and they’ll cut you back down to be the same height as everybody else. I feel like people kind of condemn you if you’re successful, at home. It feels like that a little bit when I come back. Not to everybody. Maybe I’m a little bit insecure about it or a little intimidated by it. I don’t know. But it’s strange.

On the Secret Weapons of Playing Solo

I don’t have any money to have a band, so I did it all myself. And I want to see how far I can take it. I didn’t think I’d be able to take it this far, being purely one person on the stage. I’ve also been surprised about how much shit I’ve learnt. We’re about to build our own custom looper, because pretty much what I want to do, you cannot buy that. You just can’t. So we decided to build it. What I’m using at the moment is just a two-channel looper. Left and right in, left and right out. This one’s like 48 channels. So it’s just going to be fucked.

Where my mind is so much further from where I am. So it’s good.

On Unplugging from Social Media

Tash Sultana is me when I’m on the stage, but I’m just Tash. That’s my normal life. I’m just doing things like everybody else does, except my job is just a little bit different. I don’t follow myself on social media. Anything with Tash Sultana, I do not see that. I don’t want to see that, [because] you either get a little bit of an ego from it, or you get a little bit heartbroken from it. People rip shit into you if they want to. It’s real easy. You cannot please everyone, so I’m not trying to. I just want to do things with integrity, so at least I put out what I really feel. And then if someone knocks it, then it shouldn’t knock me. Because I meant it.

I kind of disregard everything that I’ve done in the past up until now. Because just creatively and skill level — I’m just getting better all the time at understanding sound. I kind of disregard all that shit that I did in the past because I don’t actually think it’s good. When I perform those songs, I really perform them, and I enjoy performing them. But I don’t have the mental connection with them that I did, because that phase of my life is really far over. So the connection that I have with my new stuff is really strong, because that is the space that I’m in at this present moment of my life.