Film Review: Like Father Uses the Netflix Format to Play Around With Comic Conventions 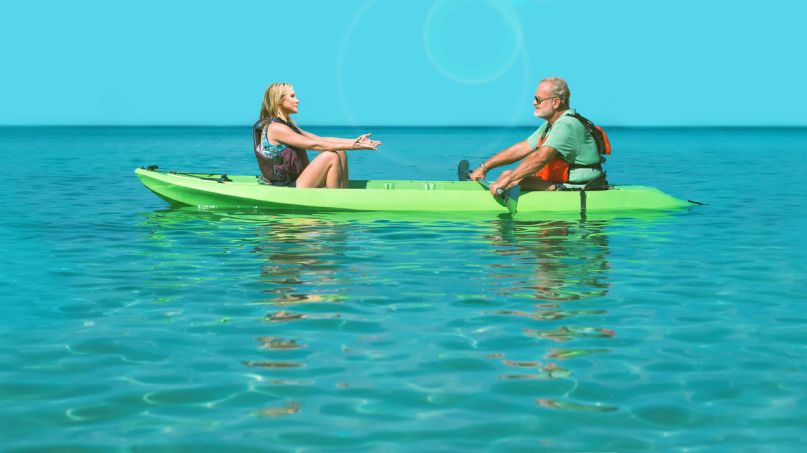 Like Father’s setup promises a certain kind of movie: After being dumped on her wedding day, workaholic Rachel (Kristen Bell) drunkenly decides to attend her honeymoon cruise with her long-estranged father Harry (Kelsey Grammer). They’re assigned to a table of kooky characters, regularly mistaken for a newlywed couple in a May-December romance, and roped into a whole bunch of ship activities, including a climactic karaoke competition. Let the pratfalls and mishaps begin!

But Like Father isn’t the movie you think it’s going to be, at least not quite. In her directorial debut, Lauren Miller Rogen (who also wrote the film) walks right up to the line of broad comedies like Couples Retreat (also starring Bell) or Boat Trip (also set on a ship). Then she asks herself how real people would actually respond in those situations. Take, for instance, a scene where Rachel, Harry, and their activity group all smoke pot while hiking in Jamaica. In a lesser film, that would be an excuse for some wacky antics and over-the-top behavior. Here the characters just act like people who have actually smoked pot — a little more prone to laughter, but otherwise pretty much themselves.

Like Father is confidently shot and showcases some lovely Caribbean scenery, but Rogen’s biggest strength as a writer/director is her masterful understanding of tone. She’s crafted a genuinely moving father/daughter dramedy in what feels like a heightened studio comedy. That’s even more impressive when you consider that a full third of the film is just an ad for Royal Caribbean Cruises (and an effective one at that — the food onboard looks incredible). There are hints of Silver Linings Playbook or Little Miss Sunshine in the film’s tone, although Like Father is glossier than either of those films. Rogen — who previously co-wrote and starred in the 2012 comedy For a Good Time, Call… — doesn’t strive for realism in her film’s aesthetic, but she finds realism in its emotions.

The film’s secret weapon is Grammer, giving one of the best performances of his film career. The 11 years Grammer spent as a sitcom lead ensures he can effortlessly handle the film’s comedy, but otherwise Harry Hamilton is about as far from Frasier Crane as you can get. Harry is simultaneously sheepish and gregarious, vulnerable and guarded, awkward and relaxed. Most of all, he’s just unmistakably a dad — despite not having been one for most of his life. Harry walked out on Rachel when she was five years old, and hasn’t had any contact with her in the past 26 years. Neither the film nor Harry himself lets him off the hook for that transgression, but Like Father also explores the ways in which age and time factor into issues of regret, abandonment, and forgiveness.

Bell makes an effective foil and sparring partner for her onscreen father. She shows off some of the steely perkiness that has long been her signature, and there are hints of The Good Place’s Eleanor Shellstrop in Rachel’s occasionally aggressive personality. But Bell also displays a much deeper emotional range than she usually gets to in her comedic work. When resolute Rachel finally does break down, Bell gets to put her emotive features and inherent vulnerability to great use.

However, this is unmistakably Grammer’s movie, and he steals it by ensuring that Harry always feels like a palpably real person. Despite the heightened world around him, Grammer could easily walk right out of this film and into something like the Parenthood TV series without feeling out of place. That realism serves the film well as it veers away from comedy and into drama. Rogen doesn’t delve as deeply as she could into the pain of Rachel and Harry’s past, preferring to keep things largely in feel-good territory. But along its margins, Like Father tells an unexpectedly moving story about adult male friendships, chosen families, and the vulnerability of loneliness.

One might be forgiven for spending most of Like Father waiting for it to go off the rails. The film keeps introducing scenarios that seem destined to spoil its carefully balanced tone. When Rachel and Harry are selected to participate in a newlywed-themed “live game show” on the ship, you preemptively cringe at the broad comedy to come. When Rachel’s potential love interest (Seth Rogen, husband of the director) starts to get clingy, you feel similarly wary about where things are going. Yet in both cases, Like Father grounds its comedy in reigned-in realism, rather than over-the-top gags. In fact, the film’s funniest moments tend to be the ones it downplays the most — including a charming exchange about pizza that immediately calls to mind a similar scene in Netflix’s recent feel-good hit Set It Up. (As in Set It Up, the plot of Like Father remains PG-13, but its characters are actually allowed to swear like adults.)

To be fair, there are times when the film veers too hard into tropes (Rachel’s addiction to her work phone), stereotypes (a gay couple who feel like they were lifted from a 2005 comedy), and clunky exposition. Yet Like Father gets more right than it gets wrong. Like Father of the Bride or My Best Friend’s Wedding, it casts big-budget stars to play likable but complicated characters in a likable but emotional story. It’s the kind of mid-budget comedy that doesn’t get made too often anymore — at least not until Netflix started making them again. In that way, Like Father is the best kind of surprise. Sure, in the broadest strokes, you’ll probably guess where the story is headed from the start. But it’s in the details that Like Father charts its own course.