John Cho chases his missing daughter through the series of tubes 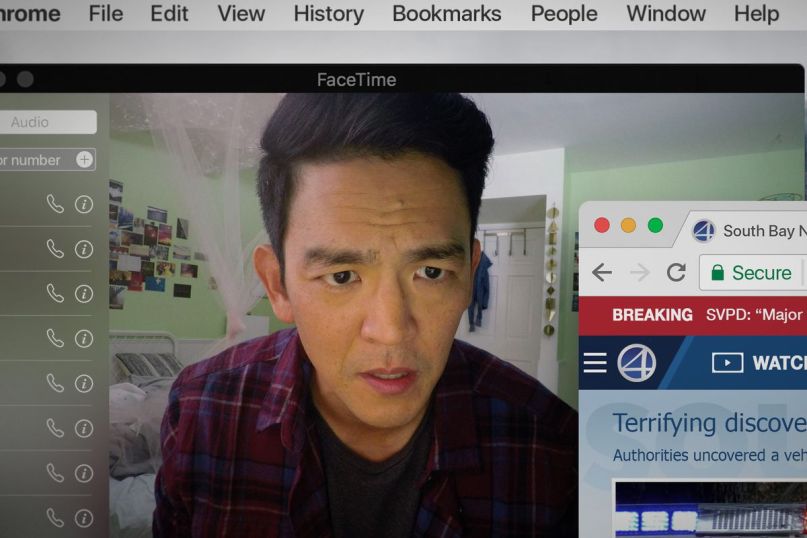 We’re now deep enough into the lifespan of the internet that a movie like Searching can use the familiar visual hallmarks of the “old internet” for laughs of audience recognition, or even emotional resonance. Aneesh Chaganty‘s film opens with the kind of virtuosic glide through digital lives that’s informed so many Google ads in recent years, but it also hits on a key truth that most films made thus far about the internet tend to miss: there’s not the true disconnect between real lives and digital lives that most people think there is. In just a few minutes, on a Windows XP backdrop, a love story becomes a tragedy, and there are photos and searches and links and AIM conversations that play key roles at every step.

Some time after, the screen is still full, but more solitary. Now, David (John Cho) clicks through distractions while trying to find some sense of purpose, after losing his wife to lymphoma. His only present one is to look after his 16-year-old daughter Margot (Michelle La), but even that’s strained at best. David and Margot are both grieving, but not with one another. They keep to themselves, David re-living his better life before things went wrong while Margot disappears into a world of her own, as teenagers tend to do. One night, David goes to sleep and wakes up to every parent’s worst nightmare: three missed calls, all made in succession in the middle of the night, and the sound of Margot’s phone going straight to voicemail.

First, David assumes Margot just left early for school. Then he gets angry that she’d let her dad wait around in a state of panic for so long. Then he realizes that her laptop is on the counter, along with all her things, and that something has gone terribly wrong. From there, Searching becomes a modern rendition of the amateur detective genre, as David works furiously alongside Detective Vick (Debra Messing) to find Margot before the worst can unfold. Chaganty frames the action as a sprint through the digital world in all of its highs and lows; the entirety of Searching plays out across screens, and it’s a testament to how well-made the film is that the mystery always remains far more engrossing than the showy gimmick.

As gimmicks go, Searching at least goes out of its way to make the most of its central conceit. It’s not the first film to use the space of a computer screen as a blank canvas for action (Unfriended, Open Windows), but Juan Sebastian Baron’s cinematography manages to alleviate the natural tedium of staring at the internet using dynamic zooms and pans. The film often manages to conjure up the sensations of closely analyzing a photograph on a website, or obsessing over the particular phrasings of a text message, and that’s where Searching finds so many of its most thrilling beats. Cho is an endlessly evocative performer, and even if he seems an odd fit for the bumbling, adrift father he’s tasked with putting across at times, his reactive performance (often partitioned off to a small part of the screen through a FaceTime chat next to another browser window) goes a long way in putting over the drama of the film’s increasingly twist-heavy race against the clock.

Searching is more focused on style and presentation than anything else, which is probably just as well given that its story of a father and cop piecing together a missing persons case is nothing if not familiar. Yet when it leans into the unique ways in which people interact online (alone or with others), it finds distinctive new ways to tell that familiar story. There’s a lot of weight to a loving message of family affirmation being typed and then deleted, or a suspicious glance off-camera during a conversation, even in our own lives. Chaganty and his co-writer Sev Ohanian fill every corner of the film with these brief moments, and it’s better off for it, as those moments are what make the film feel most distinctive against its generic trappings. There’s a strong sense of earned sentiment to David’s relationship with his daughter, and it accomplishes a great deal in terms of establishing the film’s stakes as the plot races along.

It’s not easy to make the internet cinematic, but Searching breaks new ground in taking the passive motions of being online and making them active, Chaganty frequently pushing Cho to the foreground as he pores over video updates or the kind of tiny linguistic minutiae that could be the different between bringing Margot home and losing her for good. This is a traditional thriller, with all of the red herrings and shocking revelations expected therein, but one that offers a fresh spin on time-tested material. More than anything, Searching hits on an eerie truth about our world: every answer we seek is right in front of us, but there’s so much to wade through that we could miss it altogether.