Film Review: The Meg Chews on the Scenery and Swims to Late-Summer Success 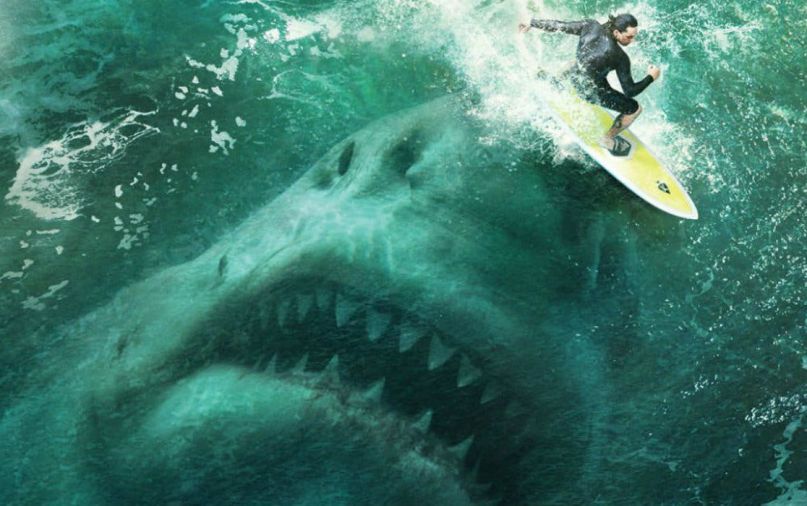 The Pitch: Miles off the Shanghai coast, oceanographers at a remote research institute have discovered a trench even deeper than the Marianas, one which would become the deepest part of the ocean on record. By penetrating a thermal layer, a ragtag group of explorers and rogues gain entry to the trench, where they discover an entirely new ecosystem of marine wildlife. However, when the first voyagers reach the bottom of the trench, they discover something terrifying: the continued existence of the Megalodon (or Meg, if you’re nasty), a giant shark and the kind of ruthless killing machine long thought extinct. Soon the Meg has escaped from the trench, the lives of the crew are in danger, and only Jonas Taylor (Jason Statham), a battle-scarred expert in marine evacuation, can save the day.

The Jaws of Death: Shark movies are having a moment right now. Between the sleeper success of last year’s 47 Meters Down, the cult fandom of The Shallows, and the enduring draw of the Sharknado flicks, the lasting terror of the ocean’s most feared beasts has continued to prove fruitful for filmmakers. However, in the same way that Shark Week has become a subject of admirations both genuine and ironic, there’s an increasing wink and nudge that tend to accompany modern-day sharktaculars. Given that Jaws more or less perfected the formula the first time around, it makes sense that filmmakers would gravitate toward something a little less grave in that vein and a little more lighthearted.

The balance that director Jon Turteltaub finds with The Meg, however, is one of the more remarkable things about this bombastic late-summer studio vehicle. Sure, the movie carries itself with a bounce in its step, jumping into its increasingly absurd setpieces with vigor. Yet unlike so many other recent blockbusters that reduce human life to peripheral cannon fodder for disaster sequences, The Meg takes the occasional beat to invest you just enough in its rowdy cast of character actors that their inevitable deaths matter a little more than they usually do in films of this ilk. Contrary to popular belief, critics aren’t usually asking for Bergman in their B-movies; we just want the people we’re spending two hours with to matter enough for us to care. The Meg benefits a great deal from its charismatic casting across the board, but it also bothers to care about those people as they’re getting chomped upon, and in an even rarer move, after the fact.

The Verdict: The Meg is pretty thoroughly ridiculous from start to finish, but then you probably worked that out from the Bobby Darin-fueled trailer alone. This is disaster movie schlock writ large, Turteltaub working from Steve Alten’s hit ’90s novel to create the kind of movie that a certain kind of action thirsts for throughout the year. This is the kind of movie where every inhabitant of the research lab is a walking quirkfest, at least one protagonist makes stern eye contact with a giant shark, and Ruby Rose plays a character named Jaxx. There’s a distinctly campy sensibility to The Meg that goes a long way toward anchoring even some of the film’s graver sequences in a general sense of play. Turteltaub benefits greatly from his game cast of “hey, it’s that guy” performers: in addition to Statham and Rose, Li Bingbing, Rainn Wilson, Cliff Curtis, Winston Chao, and a host of other familiar faces populate the underwater sealab and the treacherous oceans beyond, and they’re all wholly committed to the film’s goofy sense of gravitas.

Like any great disaster movie, The Meg knows what kind of movie it is, and it knows that its audience wants to meet Jonas drunk on a pontoon in Thailand, and it wants to watch characters screw around in the water after false alarms for just a little too long, and it wants to worry about the safety of at least one imperiled dog. Given that the film’s scale remains surprisingly intimate for much of the film’s runtime (the vast majority of the film takes place in the lab and the immediately surrounding ocean), The Meg entrenches itself in its characters. While some plotlines disappear for long stretches of the film, Turteltaub takes time to allow one scene to register before racing ahead to the next, which makes the little beats pop. Statham and Bingbing meet cute, Chao waxes philosophical about science’s responsibility to the natural order, and Wilson brays as a discount Zuckerberg bent on monetizing the Meg.

These small beats allow the film and audience alike to breathe, which is a relief given that The Meg continuously escalates to a fever pitch of giant shark madness. Beachgoers are endangered, scientists are dragged around at their peril, and all the while the film gives off the sensation that Turteltaub is simply playing around with toys in a gigantic sandbox, making an absolute meal out of a studio property that’s been floating around in development hell for years. It’s not reinventing the wheel by any stretch of the imagination, but The Meg is a perfect outing for a balmy late-summer evening at the movies. It’s a little preposterous, a little moving, and a lot entertaining. Put another way, it’s a movie about a giant fucking shark, and you already knew if you were going to see it before you ever started reading this review.

Where’s it playing?: The Meg is now playing in wide release around the world, and probably at your local multiplex.