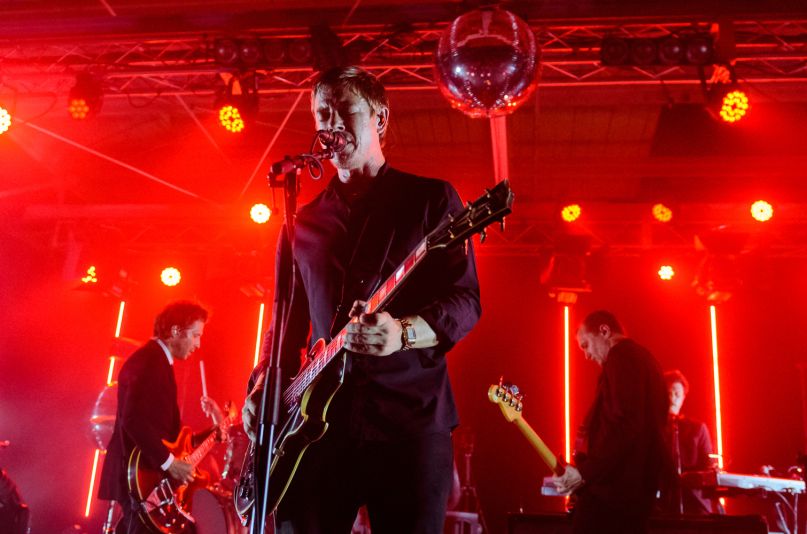 Setting the Stage: Friday night in Brooklyn was something of a double-whammy for rock fans. Ostensibly, it was the album release show for Interpol, the beloved, idiosyncratic indie favorites who had just dropped Marauder. But in the larger picture, it was also the end of an era for the venue in which that concert was being held, Brooklyn’s House of Vans. One half skate park, one half performance space, HoV shuttered its gate after this final shindig, eight years after it began hosting free shows for music hungry Brooklynites.

It’s probably fair to say that anyone in the crowded venue last night was there to experience both moments. Whatever happened with the actual gig, it would be one of those rare culture moments to look back on where you witnessed both the beginning (Interpol’s new LP) and conclusion (R.I.P., HoV) of two things simultaneously. Regardless of how you felt about Marauder itself or how often you’d actually been to House of Vans, the night was destined to be something special from its very announcement.

Taking the Stage: Things began with the snarling, moody sounds of Honduras, the local boys who’ve been a steady presence in the scene over the last few years. Even with the massive line outside, opening acts for NYC shows are never massive attendance attractions, but Interpol fans who made a point to be there early were rewarded with a solid performance that would surely give them a new band to explore. Gang Gang Dance were up next, delivering percussive-heavy atmospheres that felt like a breather between two more guitar-driven acts.

Interpol, of course, topped the night. Critics and fans have been talking of Marauder in measured terms, not slamming it by any means, though willing to admit it feels like the band have set themselves in a groove. The same could be said for their live show at this point, the only difference being they have better songs from their six-album-deep discography to flesh out the time. In other words, Interpol are very much Interpol, and you know what you’re going to get from them. On record, that can lead to some shrugging. On stage, thankfully, that leads to an 18-song setlist that pulls from the best of their output for a concert that lacks a single lull.

Things were split evenly between Antics and the latest effort. It’s hard to say if the earlier material made it more evident that the newer stuff lacked that particular umph or if it was simply familiarity, but the reaction to songs like “Evil” and encore closer “Obstacle 1” were certainly more lively than, say, “If You Really Love Nothing”. The debut of “Complications” brought cheers, though that could have been from Paul Banks announcing it was their first time playing it live as much as anything. That said, the new songs didn’t feel out of place against the old ones, and Interpol have plenty of favorites to keep a crowd pleased.

Let Me Introduce the Band: Is anyone really going to be surprised that Daniel Kessler ends up taking this one? If Banks didn’t have that damn alluringly distinct voice, all eyes would be on the dapper guitarist 100% of the time. His staunch adherence to the suit-and-tie wardrobe notwithstanding, his licks do as much for Interpol’s music as Banks’ vocals, and that goes double in a live setting.

That One Song: In terms of Marauder material, “Number 10” was a clear standout — which made the band’s choice to open with it understandable. “The Rover” is rather “expected” Interpol material, and though “If You Really Love Me” is interesting, “Number 10” really finds the best balance between their established sound and the semblance of forward progress. (It also doesn’t suffer from the record’s poor mixing choices, which is a plus.)

Considering the performance as a whole, though, it comes down to “Slow Hands”. Finishing the main set with the Antics cut is a wisely self-aware move. Despite not holding the cultural cache of, say, “Evil”, it’s a perfect demonstration of why Interpol has the kind of diehards they do: Comfortable in the knowledge that the band they love are tremendously, uniquely talented, and whatever they do in the studio is always going to be worth catching on the stage.

The House that Vans Built: Either surprisingly or fittingly, there was no big hoopla around this being the end of House of Vans. There was some free merch commemorating the venue, but this was never the sort of place that showed itself off. It was all about what could go down inside the space itself, not the skateboarding company that painted its name on the door. You wouldn’t expect anything else on the venue’s final day, and that’s precisely what you got.

With its obvious branding, nigh intolerable lack of AC, and that awful stench from the backyard drainage, House of Vans was always some kind of corporate-DIY hybrid. Yet, in spite of its flaws, it never felt cynical, always remained cool without appearing to try terribly hard. The place was just fun, one of the most inclusive venues in the saturated NYC market. And the shows were freakin’ free. It’s a bummer when any venue has to close up shop, but it’s hard to see the special flavor HoV brought to the scene being replaced anytime soon.

Setlist:
Number 10
All the Rage Back Home
If You Really Love Nothing
Public Pervert
The Rover
NYC
Mammoth
Roland
Complications (live debut)
The Scale
Evil
NYSMAW
Take You on a Cruise
Anywhere
Slow Hands

Encore:
Lights
Not Even Jail
Obstacle 1