With their long legal battle behind them, Wayne and the Cash Money Records head reunite on stage 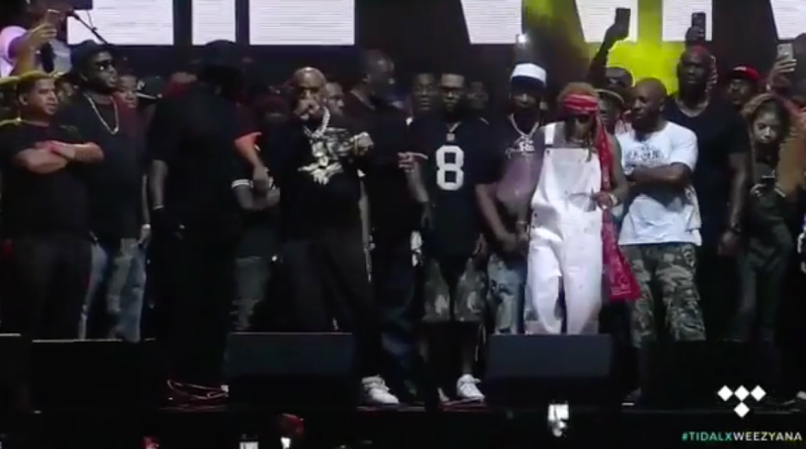 Lil Wayne threw his fourth annual Lil Weezyana Fest on Saturday at Champions Square in New Orleans. The one-day festival came in celebration of the 10th anniversary of Tha Carter III, but the event ended up taking on even bigger significance thanks to some surprise guests.

During Wayne’s headlining performance, he welcomed out a man with whom he had been viciously feuding for years: Cash Money Records head Birdman. The long-running bad blood stemmed from the delayed release of Tha Carter V and involved multi-million dollar lawsuits, drive-by shootings, and the indefinite shelving of the record. The business side of the disagreement came to a close back in June when Lil Wayne won an eight-figure settlement that included the dissolution of his relationship with Cash Money. At Weezyana, it seems the personal beef between Weezy and his former mentor was also officially squashed when Birdman took the stage.

After performing “Number One Stunna” with his protégé, Birdman stopped the show to address the elephant in the room:

“It feels amazing bruh to be home fucking with my son, I love that n*gga to death. I don’t know what y’all know but I know what the fuck I know and I know how I feel about what I know. I knew this day was gonna come, but I ain’t know when it was gonna come. But this n*gga right here? The best n*gga, the realest n*gga, the illest n*gga. And I wanted to apologize to my n*gga worldwide to let him know. That n*gga put his life in my hands, and I’m gonna keep it real with that n*gga. We’re gonna do this shit ’til the day we die.”

The pair put a stamp on the moment by launching into the Big Tymers’ classic “Still Fly”. Check out footage below.

To help close out the evening, Tunechi brought out another megastar guest in Nicki Minaj. “I want to show love for this man who gave me my career single-handedly,” the Queen rapper said. She then delivered a short performance that included “Barbie Dreams” and her verses from Tekashi 6ix9ine’s “FeFe” and YG’s “Big Bank”. She also asked the crowd if she should “give Lil Wayne some babies.”

Check out clips of Minaj’s appearance below.