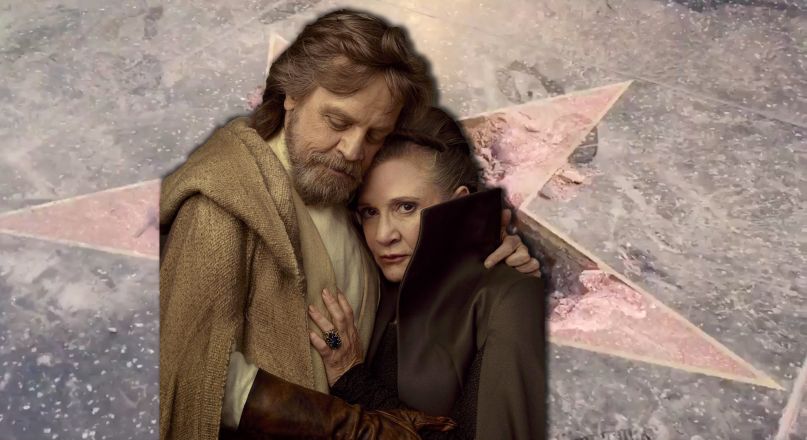 Yesterday saw the West Hollywood City Council unanimously approved a resolution calling on the Los Angeles City Council and Hollywood Chamber of Commerce to remove Donald Trump’s star from the Hollywood Walk of Fame. The vote came just weeks after a man with a pickaxe demolished the landmark, which was actually the second time in as many years the star had been destroyed. In explaining their decision, the WHCC pointed to our President’s “disturbing treatment of women and other actions that do not meet the shared values of the City of West Hollywood, the region, state, and country.”

However, the Chamber of Commerce has resisted removing stars before (namely Bill Cosby’s), citing the Walk of Fame’s historical landmark status and a refusal to bow to public backlash. Should they actually agree with the West Hollywood City Council this time, though, Star Wars star Mark Hamill has an idea for a replacement: Carrie Fisher.

“How about replacing it with someone who really earned it?” Hamill tweeted. “Like @carrieffisher.”

How about replacing it with someone who really earned it? Like @carrieffisher https://t.co/f1XMXanpWP

Fisher, who passed away in 2016, is most beloved for her role as Princess Leia in the Star Wars franchise, though her extensive film career included roles in The Blues Brothers, Shampoo, When Harry Met Sally…, and more. Trump got his star because of a reality TV show.

Trump’s Walk of Fame star was destroyed back in July by Austin Clay, who called the police on himself and was arrested shortly there after. He was bailed out by Lambert Otis, the last guy to take out the sidewalk star. If convicted of felony vandalism, Clay faces up to three years in prison.

Are you a fan of Star Wars? Check out our Lucasfilms-themed podcast, State of the Empire!