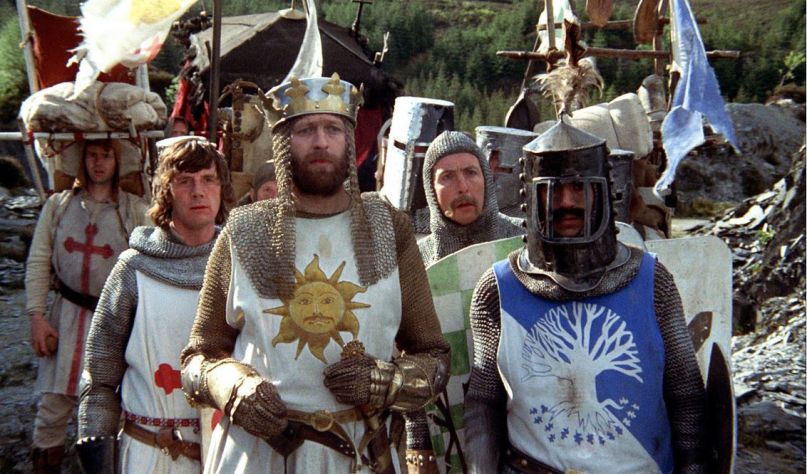 Monty Python and the Holy Grail

One of the more divisive aspects of Monty Python and the Holy Grail, the iconic 1975 masterwork from the acclaimed British comedy troupe, is its ending, which finds cops descending upon King Arthur and arresting him before the film’s climactic battle. Well, a veritable treasure trove of previously unseen Monty Python material reveals that such an ending wasn’t always the plan.

The Times reports that the private archive of Monty Python member Michael Palin is set to go on display to the public later this month, and that it contains more than 50 notebooks filled with first drafts, ideas, and alternate sketches. The ending in the film, it appears, was due to tight budget constraints, while the scripted final battle was supposed to feature the reappearance of the killer rabbit of Caerbannog. This follows the lost animation from the film that hit YouTube back in 2015.

(Read: ‘Tis a Silly Film: Monty Python and the Holy Grail at 40)

Among the other notable discoveries are two deleted Holy Grail scenes. One takes place in a Wild West bookshop that, for all purposes, seems to operate like a saloon, just with books instead of booze. In a separate scene, there was a character called The Pink Knight who would only allow King Arthur to cross a bridge after he gave him a “kiss on the lips.” Palin himself admits that that scene wouldn’t play as well today, as “the establishment attitude has changed quite a lot.” He says, however, that the sketch was meant to highlight Arthur’s “very old-fashioned and defensive attitude” towards homosexuality. You can read them both here.

The archive is being housed at the British Library, which, according to The Times, is “cataloguing the documents covering his life and work from 1965 to 1987 before making them available to library users.” A small selection will be available for consumption at the library’s Treasures gallery beginning on August 7th.