"They were tiny amps but they got the sound happening" 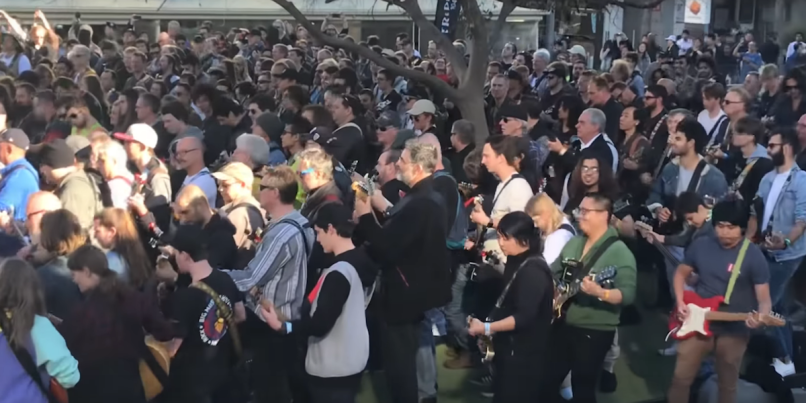 That’s a whole lotta guitars! In what appears to be a successful attempt to break the record for most most people playing the same song at the same time on electric guitar, 457 axe-slingers gathered in Australia to rock the AC/DC classic “Highway to Hell”.

According the site Music Feeds, the cacophony of riffs took place Sunday (August 12th) at the Sydney Guitar Festival, led by Australian band The Choirboys. The previous record is believed to be 368, which occurred in 2013 in India. However, it may take up to six weeks for Guinness World Records to verify that the Australian performance did indeed break the record.

Each guitarist used tiny battery-powered amps, as the Choirboys added vocals and drums to the performance. “They were tiny amps but they got the sound happening,” festival spokeswoman Tatiana Marchant told the Australian Associate Press. “It was such a great atmosphere.”

The performance comes as rumors swirl about the real AC/DC’s lineup. New photos suggest that singer Brian Johnson and drummer Phil Rudd are back in the band, and working on a new album.