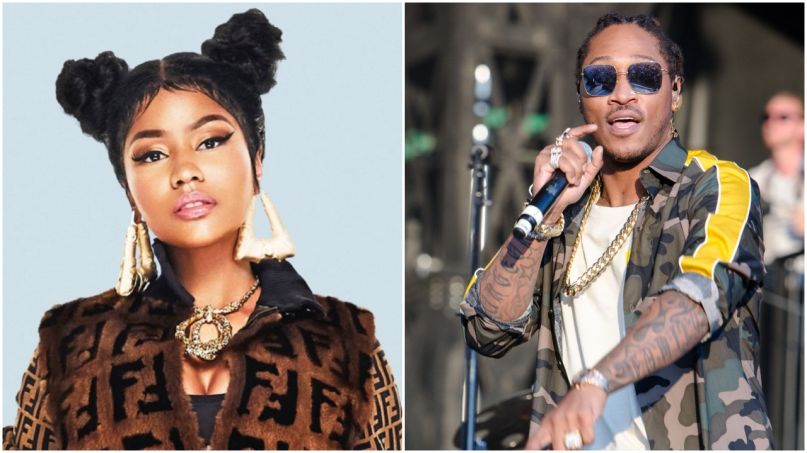 Nicki Minaj and Future were set to kick off their “NICKIHNDRXX Tour” with a leg of North American dates beginning in September. Now, though, the duo has canceled the entirety of the leg.

According to a press release, Minaj “has decided to reevaluate elements of production on the NickiHndrxx Tour… Nicki has decided to contribute more time to rehearsal ahead of the tour’s launch to make certain her fans get the absolute best quality show that they deserve.”

However, Page Six reports that the trek was plagued by poor ticket sales, claiming a Live Nation source revealed, “Nicki’s tour could be the most disappointing ticket sales of the year for any artist. These are big arenas with up to 20,000 capacities. Sales for opening night in Baltimore is 2,000 tickets. LA is 3,400, New Orleans 1,000, Denver 1,300, Chicago 3,900. Even her hometown Brooklyn is only 5,050.”

As such, the tour will now launch in Europe beginning in February. Unfortunately, due to to scheduling conflicts, Future will not join Minaj when she finally does tour North America starting in May 2019.

“Refunds for the previously scheduled North American dates will be available at point of purchase, with new Nicki Minaj on-sale details announced soon,” per a press release.

Update – August 22nd: Minaj is pushing back on the idea that her tour was canceled due to poor ticket sales. In an Instagram post, Minaj wrote, “I haven’t CANCELLED anything. I reversed the order of the US & EUROPEAN LEGS of my tour. This is for obvious reasons to anyone with a brain … My album was originally going to drop in June which would’ve given me 3 months of tour rehearsal. However, I was still writing & recording up to last week … I can’t rehearse 4 WEEKS for a tour I originally planned on rehearsing 3 months for. I give my fans QUALITY. I write & co produce my own music. Therefore, I can’t rehearse while I’m WRITING & RECORDING my album.”