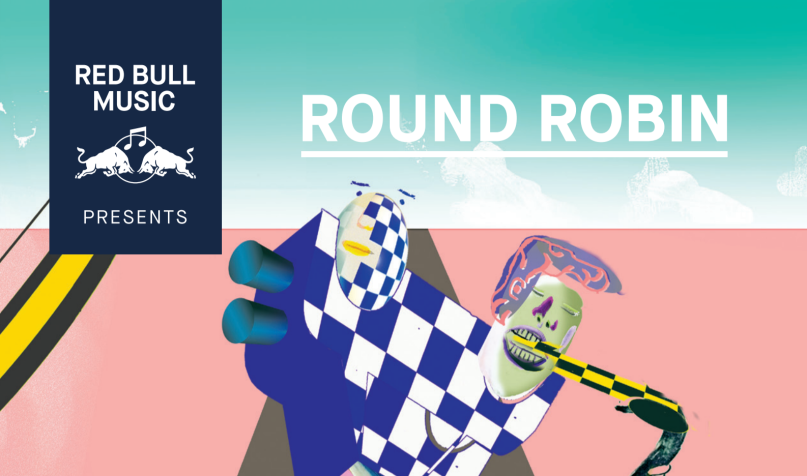 Improvisational music has always been around, but it’s cultural importance ebbs and flows, but this type of spontaneous performance is older than EDM, older than jazz, jam bands and hip-hop cyphers. It could be found in the salons of Enlightenment Europe, and in the ragas of ancient India. Improvisational music is as old as music itself; part of humanity’s past, present, and future. But now technology has brought us an almost infinite amount of recorded music, available for free, at the touch of a button. This begs the question: what is the role of live improvisational music in the streaming age?

One answer can be found at Red Bull Music Presents: Round Robin (August 30th, Thalia Hall, $5 with RSVP, $10 at the door.) An evening in which 16 improvisers from diverse backgrounds will collaborate live in a rotating series of duets. The night starts with a solo performer (A) who is quickly joined onstage by a second performer (B). Performer A and Performer B have five minutes together, then Performer B has five minutes with Performer C, and so on down the line. This progressive event format highlights the individualized experience that comes from an evening of artistic improvisation.

The artists are a who’s-who of Chicago’s culture scene, including Makaya McCraven, a jazz composer and experimental producer whose album, Highly Rare, was named by the New York Times as one of the best albums of 2017; Akenya, a multi-genre instrumentalist, who is the musical director for Noname and who has worked with Saba and Chance the Rapper; Kevin Coval, poet and artistic director of Young Chicago Authors; Katinka Kleijn of the Chicago Symphony Orchestra, who’s been called, “Chicago’s first lady of the cello,” and more.

Even for improvisers, the structure of the event is unusual. “Who knows who you might be performing with, and what references they might bring?” says McCraven. “Basically, what we’re going to be doing is trying to draw upon some sort of common vocabulary.”

Part of the appeal is the element of danger; the chance that things won’t come together. Kevin Coval says, “In our creativity, you wait for the mistake that is a blessing.”

McCraven put it more bluntly. “The audience is out there like, woah, are they gonna fuck it up?”

And then, some of the joy of spontaneous improvisational performance is that this moment is connected by an unbroken chain of events to live performances of the past. It’s the feeling that you can touch one end of the chain, and see the other end move. Akenya reflected on the inspirations of American music:

“The roots of music in this country are tied to slavery, the blues legacy, and jazz traditions – the oratory tradition that African peoples brought with them, and how that continued through music. Storytelling and exchange shaping the community – I think there’s always an element of improvisation and spontaneity with that. I think it’s part of a larger cultural legacy that has led us to this point.”

Kevin Coval says, “There’s a Jewish meditative practice that was developed in that golden era of (17th century) Spain when Muslims and Jews – and specifically the mystical traditions of both religions – had a lot to go back and forth about. There’s a meditative practice which is basically a freestyle prayer with God. I think those traditions very much inform mine own.”

Musicians and composers have built off those traditions for centuries. Katinka Kleijn has performed compositions by 21st century composers George Lewis and Julian Eastman, where there is, “An open score, so there is a score, but with a sensitivity towards improvisation. We were playing, 50 people at the same time. For fifty people to be open to what might happen in the moment, and how a group can move together, to hear something happening and all move towards that aesthetic was incredible.” She compared the structure for improv to the structure of a society: “A guideline to interact with each other. The things that happen are not premeditated, so it still has that surprise.”

Koval reflected on seeing an early show by Fugees in the years before The Score and “Killing Me Softly.”

“There was a little freestyle, and Pras got on the mic and said something homophobic. Lauryn (Hill) then interjected and basically schooled him and this audience of hyperbolic, hypermasculine, homophobic dudes in why this space should actually be intersectional and why there isn’t space for that kind of homophobia in hip hop public poetic practices. That was ill, that was one of the illest things I’ve ever seen in my life.“

Moments like these are often missing from traditional concerts, streaming tracks, and canned videos. Recitals feature less awkwardness, and also fewer moments of total transcendence. Says McCraven, “We live in a time when there’s so much music. There’s too much music to consume. We’re getting to a point of saturation, and that is encouraging to a live musician. We’ve hit a little bit of a breaking point. Audiences are craving more musicianship, more spontaneity, more freedom out of the music, because everything that we get blasted with is so controlled and so perfect and tight.”

All of the musicians I spoke to expressed some optimism about what comes next. Says Akenya, “I know people are always like, streaming has changed everything, and some people feel like it’s ruined the artist’s ability to have sustainability through selling music. People aren’t really buying music any more. But because of that, I feel like people go to see more live music. People are more excited about that.”

McCraven says, “I want to encourage people to be there and experience this, the danger and the wonder of it, and revel in the unknown.”

Of course, you could just stay home. For free, you could stream a song that has been streamed a million times, and always the same way. Or you could go to a live show – an improvised live show – and hear something that has never been heard before and will never be heard again. A live improvised event is a conversation: between audience and performer, past and present where moments of surprise, awkwardness, and glory happen fluidly. It’s the collective holding of breath and the ecstasy of release. It’s not knowing what comes next. The only way to find out is to be there.