"We’re both ladykillers ... In Italian it translates to 'somebody who murders women.'" 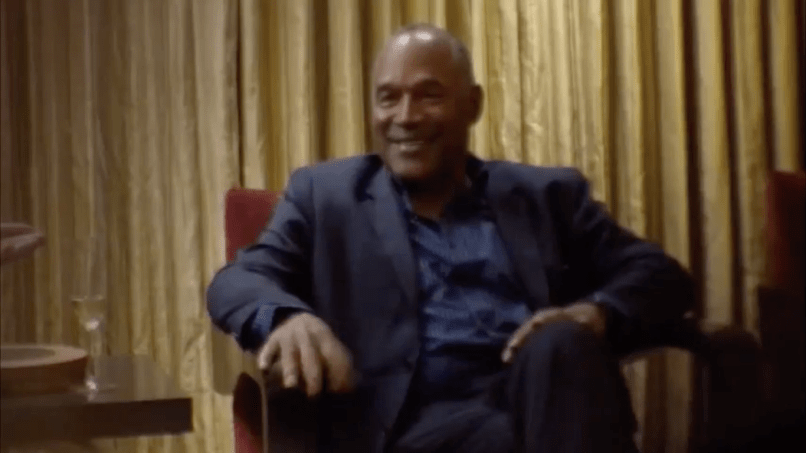 Sacha Baron Cohen’s controversial, intermittently brilliant Who Is America? wrapped up its first (and likely only) season on Sunday night, and the Showtime series went out in a shocking, if ultimately underwhelming, fashion by introducing none other than athlete, actor, and alleged murderer O.J. Simpson.

The sequence came during the episode’s closing credits and found Baron Cohen, as Italian fashion photographer Gio Monaldo, having a sit down with the Juice. The intent of the meeting was to try and get Simpson to admit to killing his ex-wife, Nicole Brown Simpson, and her friend, Ronald Goldman. Simpson was acquitted of the double murder in 1994, but has been grossly coy about whether or not he did it as of late. Unfortunately, Simpson didn’t crack, though not for Baron Cohen’s lack of trying.

Baron Cohen offered Simpson a seven-figure cash sum if he’d reveal to Monaldo’s boss, a fictional Sheikh, that he actually committed the murders. While Simpson remained jovial throughout their meeting, he repeatedly insisted he “didn’t do it.” As such, Baron Cohen’s Monaldo needled Simpson with various jokes about how much he wants to murder his own girlfriend, jokes to which Simpson often chuckled and responded to by giving high-fives.

Per Deadline, which shared a number of behind-the-scenes details on how the stunt came together:

“This took preparation that included Baron Cohen spending hours with a former lead interrogator for the FBI, an expert in drawing out confessions. It also involved creating credible cover stories for the Sheik and Mansour, so that the lawyer who pocketed the fee and others could Google and feel they were dealing with real people. When Simpson didn’t take the bait, Baron Cohen’s Monaldo character had to be content with essentially calling Simpson a murderer continuously for a three minute stretch. The result is well, creepy. Said Monaldo: ‘What I hate about the press is you make a tiny little slip, and that’s all they remember you for. You’re not the O.J. the touchdown. You’re not the O.J. the movie star. You kill two silly people and suddenly, you’re O.J. the murderer.'”

It’s some cringeworthy stuff, especially when Monaldo brought in an Italian girlfriend who knew Simpson not for his acting or athletic career, but only for his reputation as a cold-blooded killer. Of course, that didn’t stop Simpson from repeatedly mentioning how beautiful she was.