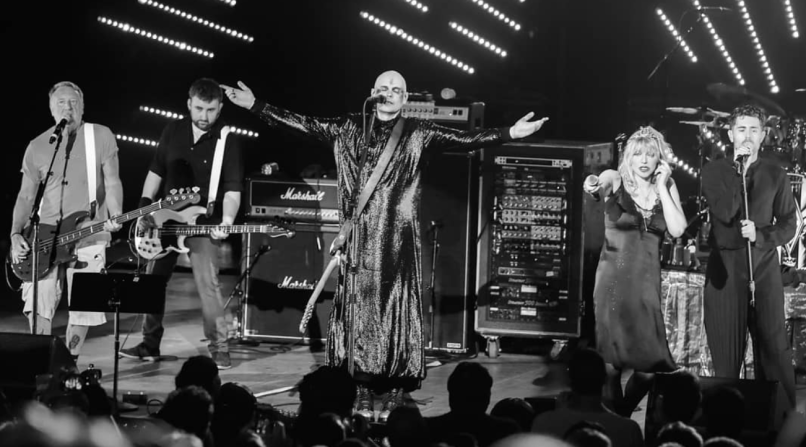 Moreno was the first guest to take the stage, joining the Pumpkins for rare performances of “Bodies” from Mellon Collie and the Infinite Sadness and the Gish track “Snail”. The latter hadn’t been performed live since 2000.

Next, The Killers’ Dave Keuning and Mark Stoermer sat in “Cherub Rock” and “1979”.

In the most left-field moment of the night, Smashing Pumpkins covered Sugar Ray’s hit song “Fly” with the band’s singer Mark McGrath. McGrath, who filmed several of the tour’s background visuals, also participated in a cover of Judas Priest’s “Breaking the Law”.

Love then came out to lead the Pumpkins in performing a pair of Hole songs in the form of “Celebrity Skin” and “Malibu”, both of which were co-written by Corgan. She also stuck around for Pumpkins’ own “Bullet With Butterfly Wings”.

Hook guested for performances of New Order’s “Age of Consent” and Joy Divsion’s “Transmission”, the latter of which also featured an appearance from AFI’s Davey Havok. To close the set, Hook, Havok, and Love all joined the Pumpkins for a cover of Joy Division’s “Love Will Tear Us Apart”.

See the full setlist below.