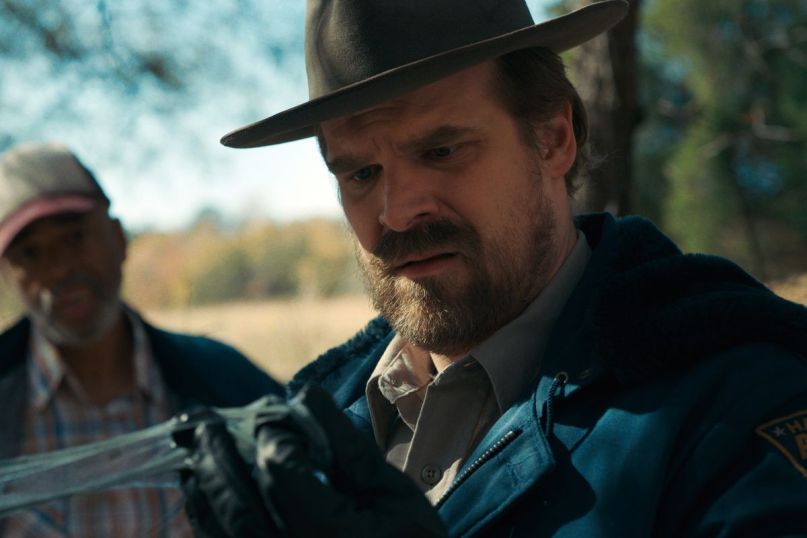 David Harbour, the extremely online actor who plays Sheriff Hopper on Netflix’s Stranger Things, provided plenty of details about the series’ third season during a Q&A at Hollywood Forever Cemetery in Los Angeles on Friday night, not the least of which being that the Duffer Brothers are describing the upcoming season as “so much of a departure and so much of a risk.”

As we already know, season three takes place during the summer of 1985, with the events circling around the release of Back to the Future, but it appears there’s another movie of the era that’s had an impact on the season’s direction. “The Duffers are so specific each year with the movies. And Fletch is one movie we get to play around and have some fun with this season, which you wouldn’t expect from Stranger Things and you wouldn’t expect from the Spielberg universe and you certainly wouldn’t expect from a darker season.”

A Chevy Chase vehicle, Fletch follows a newspaper reporter who routinely changes his identity in pursuit of scoops. As such, it’s likely that the flick’s influence will lend itself to Jake Busey’s Hawkins Post journalist, who’s been described as having “questionable morals and a sick sense of humor.”

Harbour also revealed that the forthcoming season will find his character struggling with being a mentor to Millie Bobby Brown’s Eleven, for whom he continues to serve as a guardian. “Their relationship is going to get far more complex, because, you know, things happen to girls and boys when they’re 13 and 14,” he explained. “A lot of changes go on in the body and in your social life, and I don’t think he’s going to handle watching her become a woman in front of his eyes very well. That’s a horrifying thing for him — maybe even more so than fighting inter-dimensional monsters.” Hardy-har-har, Dad.

(Read: Steve Harrington Is the Greatest Stranger Things Character, and Here Are All the GIFs to Prove It)

He also hinted at a love story for Hopper, noting that, if it were up to him, he’d angle for a romance with Winona Ryder’s Joyce Byers. Wouldn’t we all, buddy.

Add all of this to what we already know: Season three will premiere in the summer of 2019, and will also introduce new characters like Cary Elwes’ corrupt mayor and the local mall’s Maya Hawke, who works with Steve Harrington at an ice cream shop called Scoops Ahoy. To coincide with the new season’s release, Penguin Random House will publish a prequel novel telling the story of Eleven’s mother and Telltale will release a video game set in the series’ universe.

Previous Story
Netflix disputes they’re airing commercials between TV episodes (even though they are)
Next Story
GLOW renewed for a third season, will take the show on the road
Popular
More Stories
[fu-upload-form form_layout="media" title="Submit Your Photo"][input type="hidden" name="ugc" value="1"][/fu-upload-form]