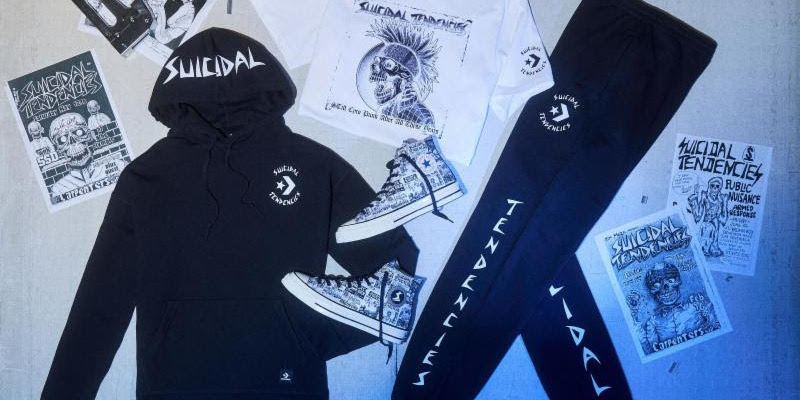 A seemingly long overdue collaboration is happening, with Suicidal Tendencies getting their own custom Chuck Taylor All-Stars.

The veteran crossover thrash band and Converse just unveiled a new line of shoes and clothing, with designs based on the work of Ric Clayton, the artist who helped craft the group’s posters and album art in their ‘80s heyday. And to hear vocalist Mike Muir tell it, this collaboration is a dream come true.

“All these years later, Converse has the same meaning to me,” Muir said, in a statement. “Just as young Mike will never forget putting on his first pair of Chucks, I can’t wait to relive that amazing feeling with the new Converse x Suicidal Tendencies, a massively proud moment for the band, our fans and of course me personally!”

The new collection will be available through Converse’s website and in select stores beginning September 7th, the same day that Suicidal Tendencies drops their 13th studio album, STill Cyco Punk After All These Years. The new disc, available for pre-order here, finds the band, which now includes former Slayer drummer Dave Lombardo, re-recording a host of material from Muir’s 1996 solo album Lost My Brain! (Once Again), which he released under the name Cyco Miko.

As well, Converse will be hosting a pop-up shop at Bodega Boston in Massachusetts on September 7th and 8th to sell the wares. Beantown is also where Suicidal Tendencies are kicking off their latest U.S. tour with a show at the House of Blues Boston, where the band will celebrate the 35th anniversary of their debut by playing their 1983 self-titled album in its entirety. The month-long trek includes stops at Chicago’s Riot Fest and the Louder Than Life Festival in Louisville, Kentucky, before wrapping up on October 6th in Salt Lake City. Ticket links and a full list of dates can be found here.

Suicidal Tendencies also used the occasion of this Converse collaboration announcement to unveil a new track from STill Cyco Punk into the world: a re-recording of “It’s Always Something” accompanied, in this newly released video, by some impressive time lapse airbrush painting done by artist Alan Pirie, better known by his handle Samurai Guinea Pig. Watch below.