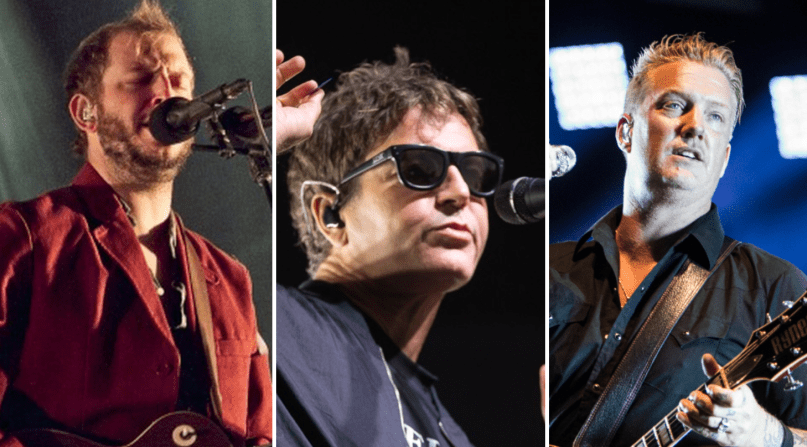 Third Eye Blind have returned with Thanks For Everything, a new seven-track EP which finds the band covering songs by an eclectic range of artists, from Santigold to Queens of the Stone Age to Bon Iver. “The idea with this EP was to amplify some of that music and art, and in doing so, catch inspiration for our next album,” the band explains.

Thanks For Everything was released on Friday and can be streamed in full below. Included are covers of Bon Iver’s “Blood Bank”; Queens of the Stone Age’s “In the Fade”; and Tim Buckley’s “Song of the Siren”.

Frontman Stephan Jenkins had this to say about each of the band’s covers:

Happy Diving — “Ten”:
“Happy Diving sounds like a 17 year-old skater with a cast on the wrist and hair in the eyes blithe fully flying blind and smiling into a half pipe. The band is carefree and careening, and luxuriating in effortless energy, and I wanted that feeling to inhabit me. ‘I absolutely want to shag the drummer,’ my friend said. ‘Are they doing guitarmony?’ I said. This is like bliss core Thin Lizzy. They broke up shortly after. It bothers me how so few people got to hear their music. Here’s our remedy. We tracked this somewhere in Europe with big smiles on our faces.”

Santigold — “This Is Not Our Parade”:
“Some songs let you see the whole landscape. Exotic, dark and cool. I heard a rave in that song that could burst out. This was one take with everyone in the same room in Memphis at a day off at the famous Ardent Studios.”

Tim Buckley — “Song of the Siren”:
“This has to go on any list of best song ever written. Elizabeth Fraser is also my favorite singer of all time and of course her version is definitive.”

Chastity Belt — “Joke”:
“We saw Chastity Belt at a club in Berlin. The drummer had a broken shoulder. No matter, she had a quiet style anyway. In the studio, I came to grips with what a great singer Julia Shapiro is. She’s Nico of the Northwest, plus she does that cool shit on the guitar.”

Bon Iver — “Blood Bank”:
“When I listen to Justin Vernon, I feel like a better person. I feel pure and authentic and sure of my convictions. I’ve been captivated by ‘Blood Bank’ since I first heard it. I’m so in the landscape of the song, it’s as if I’m in a movie when I’m singing it. ‘Blood Bank’ would be a really good movie — definitely shot on 16mm film. We recorded it in Düsseldorf.”

Thanks For Everything Artwork: