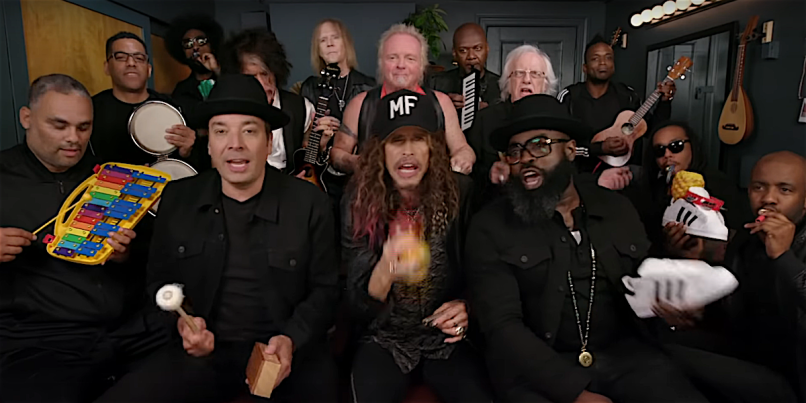 Aerosmith first found success with “Walk This Way” in the ’70s, and then teamed up with rappers Run-DMC in the ’80s for a version of the song that helped the legendary Boston rockers revive their career. Now, the Rock and Roll Hall of Fame act has given the classic cut the classroom treatment, teaming up with Jimmy Fallon and The Roots, using children’s instruments on last night’s Tonight Show.

The performance is the latest in Fallon’s classroom instruments series, which has featured Metallica, Madonna and more in previous segments. The Aerosmith edition includes band members Steven Tyler rocking apple and orange shakers, Joe Perry on ukulele, Joey Kramer on a Fisher Price drum, Brad Whitford shaking a maraca and Tom Hamilton on tambourine, plus The Roots and Fallon playing items like kazoos, bongos and more.

The performance even featured Fallon and The Roots’ Tariq “Black Thought” Trotter sporting Run-DMC outfits, and a couple of instruments housed in Adidas sneakers as an homage to the hip-hop act.

Aerosmith will be playing their regular instruments, we presume, when they perform during their recently announced Las Vegas residency in 2019. Those shows begin April 6th at the at the Park Theater at the Park MGM resort in Sin City.