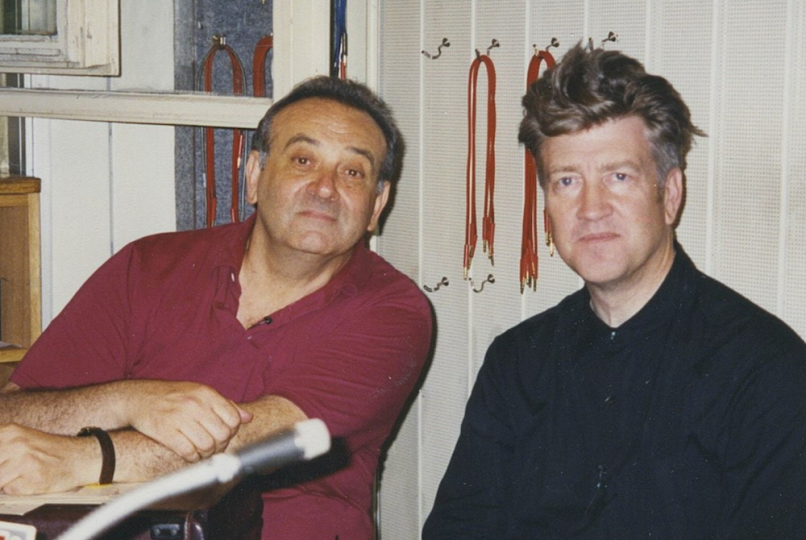 In addition to helming music for countless David Lynch projects such as Blue Velvet, Mulholland Drive, and the original run of Twin Peaks, Angelo Badalamenti recorded music with the legendary filmmaker under their collaborative moniker Thought Gang. Now, their early ’90s sessions have been unearthed and collected into a proper album also titled, Thought Gang.

Due out November 2nd through Sacred Bones, the long-lost LP features a total of 12 tracks, many of which were recorded separately over the course of years. “It’s sort of like jet-fueled jazz in a weird way…but it’s all based on stories,” Lynch described Thought Gang’s sound in a statement. “It’s Modern Music.”

Lynch and Badalamenti officially decided to form Thought Gang during a 1991 recording session for a track called “A Real Indication”, according to a press release:

As the oft-told story goes, Lynch and Badalamenti had just finished recording the initial instrumental take for ‘A Real Indication.’ A set of lyrics had been penned, leaving Lynch with the question: who would he get to sing them? Eager to prove and deliver, Badalamenti suggested that he himself give it an attempt, much to Lynch’s uncertainty that he’d actually be the right fit. “I’d heard Angelo sing before…he used to sing on demos and things…I knew what Angelo sounded like and I thought he was going to embarrass himself…I thought there’s no way this was gonna work.” Much to Lynch’s surprise, Badalamenti launched into the song with his distinctive talk-sing delivery, summoning such a violent laughter-fueled excitement from Lynch that he literally induced a hernia. “It was like a lightbulb exploded in my stomach,” Lynch recalls. “Angelo was feeling it. He was feeling it…we hit the button and he just took off!”

A handful of songs here may sound familiar to Lynch diehards. Titles “Frank 2000”, “Summer Night Noise”, as well as an alternate instrumental mix of “Logic and Common Sense”, popped up in last year’s Twin Peaks reboot. Others have appeared in various forms in Mulholland Drive, deleted scenes from Fire Walk With Me, and even a Lynch-presented Adidas commercial.

To preview the Thought Gang album, a song dubbed “Woodcutters From Fiery Ships” has been released. Like the rest of the record, it features additional instrumentation from bassist Reggie Hamilton. Take a listen below.

A video for the album is said to be premiering at Lynch’s Festival of Disruption, which takes place next month in Los Angeles. “It is a short video featuring my friends the ants, along with cheese, etc. and one and a half tracks from the upcoming Thought Gang album,” he said of the piece.