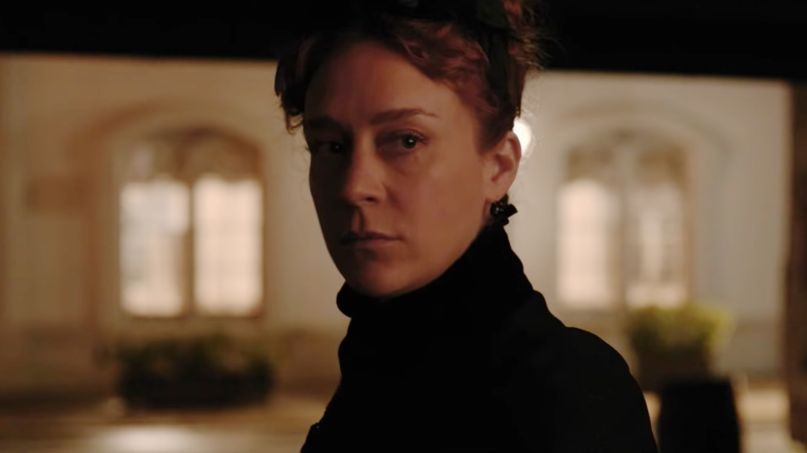 The Pitch: On August 4, 1892, in a prosperous town in Massachusetts, Andrew and Abby Borden were viciously murdered in there home, the victims of a grisly attack. Ever since, the mythology surrounding Andrew’s daughter Lizzie (Chloe Sevigny) has shifted wildly. Lizzie was suspected but never actively tried with the murders; after the case moved on, nobody else was, either. However, Lizzie isn’t about the Borden murders, at least not for most of its runtime. This is a film more concerned with the interiority of Lizzie Borden, of who she was and what about that particular time in history might have pushed her to cross the line she (allegedly) did.

Lizzie Borden Was Eventually Pushed To An Axe: For years, the Borden murders have existed as a source of fringe fascination in American folklore. As the legend goes, Andrew (Jamey Sheridan) married Abby (Fiona Shaw) after the death of Lizzie’s mother; as Lizzie saw it, Abby was merely interested in the Borden family fortune. Lizzie, as director Craig William Macneill posits, was a black sheep within the Borden family long before Abby’s arrival, the “difficult” daughter against sister Emma (Kim Dickens) and her more agreeable demeanor. Lizzie, as visualized by Sevigny, is a taciturn woman, deeply intelligent but wracked with constant paranoia and fear, abrasive to her peers in the local gentry and even more so to her disrespectful stepmother and openly abusive father.

In its most compelling moments, Lizzie picks apart the psychology of its titular killer, framing the film’s events not as the tense crescendo to a vicious murder, but instead as a tragic and inevitable progression of slights and humiliations which can only possibly end in one way. From the moment the new housekeeper Bridget Sullivan (Kristen Stewart) arrives, and Lizzie begins to look at her in ways that no other person in her life is granted, it’s clear given the film’s time and place that only tragedy will follow. To its credit, however, Lizzie manages to queer the Borden legend without turning lurid or exploitative; Sevigny and Stewart’s work may be understated to the occasional point of stiffness, but that’s hardly the fault of either performer when the film actively invokes that particular tone at many points throughout.

There’s a delicacy to both performances, particularly Sevigny’s, that stops Lizzie from sliding into the exploitative territory that so many other stories of the Borden murders tend to take. Macneill’s perspective is refreshing (if, again, fairly starched from start to finish) in that it sees Lizzie Borden not as a folk murderer, but as one of so many perpetually abused women living in a time where those concerns were simply not shared by the world around her. There’s still eventually the axe violence with which the story must concern itself, as well, but that moment is complicated by the context the film establishes for why a person might do such a thing.

The Verdict: Lizzie isn’t exactly an exciting film, but it’s absolutely a compelling one. Much of that, again, emerges from Sevigny’s work, who finds the notes of delicacy that the film around her occasionally lacks. (Denis O’Hare can deliver the smarmy menace he lends to her uncle John Morse in his sleep, but his unveiled threats land as clunkers in an otherwise thoughtful and deliberate piece.) As interpreted by the veteran indie performer, Lizzie isn’t the kind of protagonist one follows for her depths or multitudes. She’s an angry, often mean person, but Lizzie effectively argues that this shouldn’t matter. She was an odd, singular individual in a time where odd men were given the moon and odd women were demeaned into obedience.

It’s no surprise that most of the film’s best material comes from Sevigny and Stewart sharing the screen. The latter has been doing stunning work of late, playing with her natural inclinations toward silence and evocative stillness, and here the two convey the kind of relationship which couldn’t then declare itself aloud by leaning into both. If that makes Lizzie the kind of film that’s either referred to as “patient” or “boring,” depending on one’s preferences, it also puts it a cut above its peers in either respect. The halted nature of their dynamic, from initial attraction to more, generates far more tension than most of the film’s intimations of violence to come, and it allows Lizzie to consider its subject as a human being in a way that many historical biopics fail to even attempt. It may not make for a particularly showy film, but it allows Lizzie a thoughtfulness that stories of troubled women throughout history often elide as well.

Where’s it playing?: Lizzie will enter into limited release on 9/14, and roll out in select theaters nationwide in the following weeks.