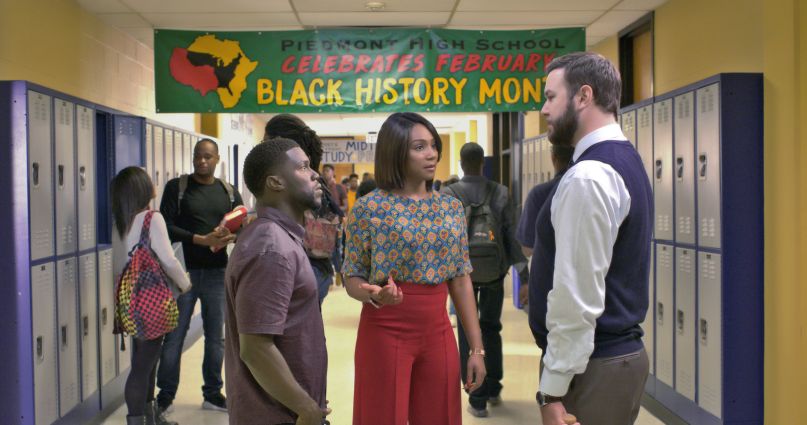 The Pitch: Hartbeat Productions, a Kevin Hart Company, presents…Night School. The story of a self-proclaimed liar, Teddy (Kevin Hart of Hartbeat Productions), and his yuk-filled quest to get his GED. It’s an Atlanta-bred after-school special with a PG-13 rating and a failing desire to make the class laugh at Hart’s plight.

See, Ted’s in his late 30s and has succeeded as a top manager at a BBQ company. But when he blows up his store with a cork hitting a propane can, Ted’s out of a job. Now Ted must deal with being a high school dropout, and the realization that his options are limited. (Ted’s also engaged, and may have bluffed that he’s transitioning to finance to his fiancée. Classic Ted.) Anyway, he needs a GED for job-hunting, and he needs it in secret to avoid total embarrassment. Enter night courses with Carrie (Tiffany Haddish), Ted’s new teacher. She’s truthful. She’s no-nonsense. She’s got literally nothing to lose because she’s a broke, exhausted educator. Like in life.

Same Old Syllabus: Remember spring’s Life of the Party with Melissa McCarthy? Or the meta-licious pairing of 21 and 22 Jump Street? Or Billy Madison? Rodney’s Back to School? There’s such a dusty familiarity to the adult-in-school subgenre that it feels like cheating to keep using the outline.

Pair a couple of comic leads (they have to be foils who eventually make up), divide by perceivably wacky students-cum-friends (archetypes, cliches work decisively), throw in a scheme (test theft), some lessons (learning disabilities, second chances) and voila: product by the textbook. Night School checks off all these answers off with predictable energy. The movie’s merely the latest A-list comedy of this sort, is happy to live in the middle, and yet it frustratingly outwears its welcome because of a lack of creativity and sloppy structure. Yes, Night School is a smiling C-student in this class of comedy.

Fuzzy Math: There’s something amiss about Night School. Director Malcolm D. Lee (cousin of Spike) and rising star Haddish are back in the saddle for a quick star vehicle to capitalize on the duo’s tremendous success with Girls Trip. So why doesn’t Haddish feel like she’s actually the star?

It’s hard to put a finger on, but a few things on-and-offscreen contribute to this. The movie was filmed last September, and if one were to guess, Universal realized they had a hot new name on their hands with Haddish, so they expanded her role after the greenlight for what was likely a Hart vehicle. Haddish appears sporadically, and in tacked-on fashion. She initially rolls up in a VW with panache as a miracle worker for Ted, but any following scenes for her are piled on, inelegantly. Her floating head shows up (achieved through After Effects?) in study montages, and several of her appearances feel outside the movie (you’ll get it when you see her in a fight cage with Hart, for reasons dubious). Her lines are also stock at best, like calling Hart a “leprechaun” because he’s short. She vogues, she shows compassion and toughness for the world’s hardest job, and she brings a recognizably appealing confidence and crassness. But she works in bursts, at the edges of the movie.

Haddish might be on the poster, but the film doesn’t give her nearly enough. And that’s because, one thinks, this was intended to be Hart’s show. By now, you know Hart’s performance: big, broad, deliriously confident, a tad unwieldy. When diagnosed with a processing disorder, Hart milks exasperation for a punchline about having academic herpes. He’s playing to the cheap seats.

All around, Lee, Haddish, and Hart feel like they’re coasting. This is a quickie fall comedy. One could say that Night School feels choppy, or rushed, or slack, or whatever you wanna call it. It has moments of editorial awkwardness. There are flow issues. There’s a lack of big laughs. The flick just doesn’t come together in a way that would constitute an A. It’s not failing, but it’s hardly making honors.

The Verdict: There’s this social norm of saying something is “fine.” It’s code. Manners in the face of something mediocre, or something you don’t hate, but certainly aren’t feeling either. This pre-made French onion dip at your football party is fine. The sound at this concert from the very back is fine. Night School is fine. If Malcolm D. Lee were a student, and we were to average his work: Girls Trip, that was great. Barbershop 3, that’s good as well. Night School is fine, forgivable in spite of inconsistencies and lack of any standout moments. Lee, Haddish, and Hart will have plenty of chances to fix their average.