Film Review: The Nun Is the Most Boring Horror Movie In Years 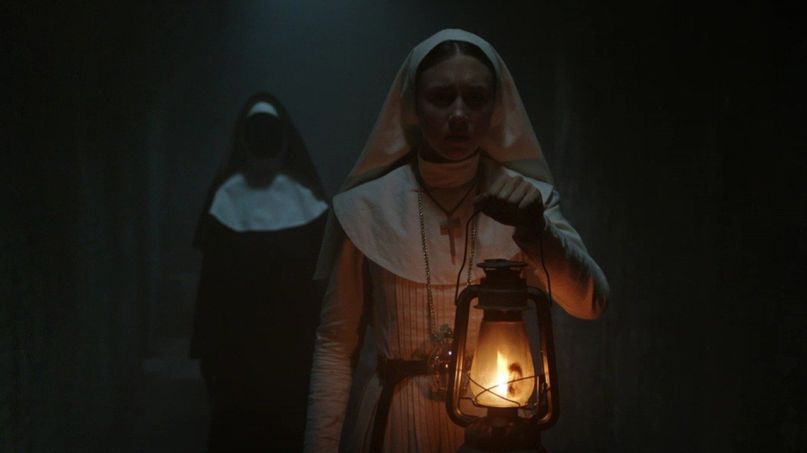 The Pitch: Because everyone thought that one scene from The Conjuring 2 was creepy, Warner Bros. opted to make an entire movie devoted to the religious specter, which is why we now have this spinoff feature, The Nun. Set in 1952 Romania, this completely unnecessary prequel follows Catholic priest Father Burke (Demián Bichir), who’s been tasked by the Vatican to investigate the mysterious suicide of a nun at the Cârța Monastery. Joining him is Sister Irene (Taissa Farmiga) and some hunky man servant named “Frenchie” (Jonas Bloquet), who both respectively serve as beacons of exposition and tomfoolery, enough to make your eyes roll deep into the back of your head — you know, like one of James Wan’s creepy creations!

Conjuring Thrills: Seeing how this is part of The Conjuring Universe, since Hollywood is all about those lucrative cinematic universes that give ’em that sweet, sweet flow of cash, fans can expect the same ol’ chills and thrills that have made their past mainstream horror efforts unstoppable blockbusters. In other words, expect a glut of CGI, super slick gore, and literally every type of horror trope you can imagine, going as far back as the old Universal Monsters lore, what with the classic Romania setting. But, you know what’s really not scary? Backstory. When will these Tinseltown suits learn that the more you reveal, the less you scare. It’s simple logic! Think of it this way: Would a closet be creepier after you turn the lights on?

Keep It in the Family: Gotta give it to the cast, though. The three faces — Bichir, Farmiga, and Bloquet — really try to pull this one from the grave, particularly Farmiga, who follows in the footsteps of her sister, Vera. Granted, this is easy peasy fare for the Ryan Murphy alumnus, but she at least tries to sell the scares with her chalky exasperations. The same goes to Bichir, who proves once more that he’s one of Hollywood’s most underrated leading men. (Seriously, can this guy get a prominent role in a Michael Mann movie or something? For Christ’s sake.) It’s truly undeserving casting for such a garbage production, and you can tell by the end that they’re all huffing and puffing in trying to make this something more.

Verdict: The problem is that The Nun was always doomed to fail. By the end of The Conjuring 2, the titular force had already expired its scare factor, becoming this magnanimous spirit that could somehow swindle people through Bond-esque twists. That’s not scary! That kind of deception is too human to be scary! So, to further flesh out her backstory only makes the spirit that much more ineffective, which is why there’s nothing spooky about this movie at all. In fact, it’s about as effective as a Walgreens Halloween display, where any terror derives from uninspiring shock value, and given that each and every pop-up scare can be seen from over a mile away, the movie fails in that respect, too. It’s exhausting even.

From the get-go, The Conjuring series has always been its best when it stays down to Earth. What made the original so effective was how it felt like a back-to-basics ’70s production in the vein of The Changeling or The Amityville Horror, where the scares stemmed from your backyard. In fact, that movie only stopped being scary when it indulged in the epic theatrics, which is sadly what this franchise appears to be capitalizing on, given what we’ve seen from 2016’s bloated Conjuring sequel and now this hollow genre film. Even so, the concept of a Conjuring Universe in itself doesn’t work, not because it’s based on two historical hacks like Ed and Lorraine Warren, but because, once again, horror is best left unknown.

But hey, keep turning on those lights, Hollywood.

Where’s It Playing? The Nun is playing in theaters everywhere.