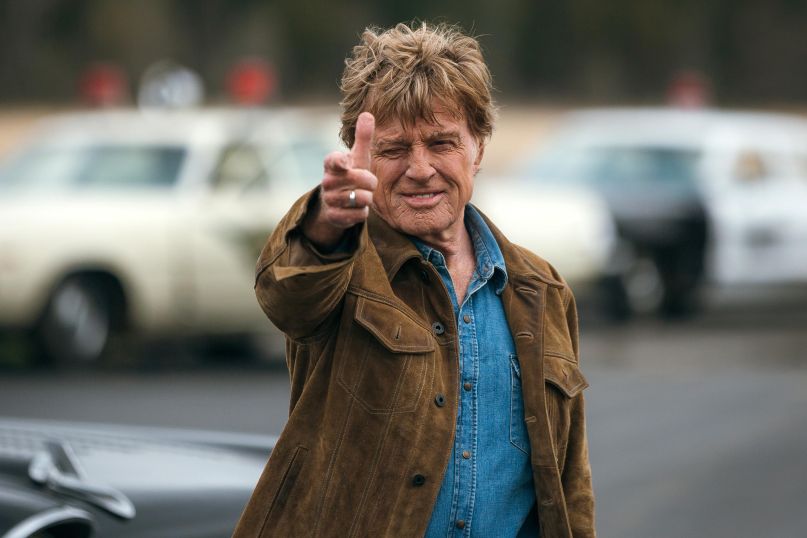 There were two things Forrest Silva Tucker could do better than anyone else: rob banks and break out of prison. By his own account, Tucker escaped from various prisons “18 times successfully and 12 times unsuccessfully,” spending what few months of freedom he had in between robbing banks. In the late ‘70s and early ‘80s, he became notorious as the leader of a three-man group of elderly bank robbers dubbed the “Over the Hill Gang,” known for his incredible charm and devil-may-care attitude. It’s a story innately attuned to cinema – think Bonnie and Clyde meets The Bucket List. And who better to tell it than David Lowery and Robert Redford?

Adapted from the New Yorker story of the same name by David Grann, The Old Man & the Gun follows Tucker (Redford, as charming as ever) at the height of the Over the Hill Gang robberies. His two primary weapons are a Colt .45 revolver no one’s ever seen him fire, and a police scanner masquerading as a hearing aid. He goes from bank to bank, practicing his decades of experience on unsuspecting bankers, tellers, and customers; Tucker and his accomplices Teddy (Danny Glover) and Waller (Tom Waits) basically schmooze their way through each of their targets. The major refrain heard by Detective John Hunt (Casey Affleck) through his investigations of the Gang? “He was just so nice.

From the opening frames, Lowery’s influences are unabashed, walking in the footprints of ‘70s film giants like Altman, Cassavetes, and even Monte Hellmann and Peter Yates. Lowery has made a name for himself as a filmmaker with a distinct eye for existential melancholy (A Ghost Story is particularly, well, haunting), but The Old Man & the Gun sees him in more crowd-pleasing, affable territory. Rather than the mournful elegies of Ain’t Them Bodies Saints and A Ghost Story, Lowery’s latest is affable, peaceful, putting you at ease as thoroughly as Tucker does any of his marks. Joe Anderson’s soft, 35mm grain is perfect for the film’s retro sheen, and frequent Lowery collaborator Daniel Hart does his best Marvin Hamlisch impersonation with Old Man’s silky-smooth jazz scoring.

Of course, none of this works without Redford, putting in superlative work in a role that, without cliché, feels like he was born to play. Working together with Lowery for the second time (the first being the filmmaker’s surprisingly warm-hearted live-action remake of Pete’s Dragon), Redford’s signature smile and innate charisma easily carries the film on the hunched shoulder pads of Tucker’s slimming blue suit. Even in his late 70s, there’s still something of the Sundance Kid in him, a twinkle in his eye that betrays Tucker’s immense zest for life. Every moment he’s onscreen feels like a tribute to the actor’s career, Redford getting more than a few moments to relive many of his major roles – he rides a horse like Sundance (or The Horse Whisperer), plans heists like The Sting, and rebels against his captors like The Last Castle. Look closely, and you’ll even glimpse some stock footage from an earlier Redford film in a particularly endearing montage of his escapes to date.

Tucker’s romance with Sissy Spacek’s widowed rancher Jewel is electric, whether in sly discussions over coffee about his ‘real job’ or furtive last-minute kisses at her doorstep. There’s one scene at a mall jewelry store where Tucker and Jewel negotiate whether or not she’ll let him steal a diamond bracelet for her, the entire exchange delivered wordlessly. It’s flirtatious, tense, and rooted deeply in what’s known of these characters and what they’re about. The Old Man & the Gun is chock-full of these easy, addictive moments, little dopamine hits of pure cinema that keep one coming back for more. Just like Tucker can’t help but chase the thrill of an outlaw’s life, so too the audience gets hooked on Redford’s effortless presence, and the airy, ethereal joys the film presents.

Still, every Valjean needs a Javert, and Affleck’s Detective Hunt is a man similarly driven by his life’s calling as Tucker. In many respects, he is everything Tucker isn’t – a young man at the start of his life, with a loving, supporting family. And yet, there’s a grudging respect for each other, their rivalry harkening back to the father-son relationship of DiCaprio and Hanks in Catch Me If You Can. While the ongoing questions around Affleck’s sexual harassment allegations linger on with every new role he takes (and Lowery’s willingness to work with him), he’s undeniably wonderful here, infusing Hunt with an understated love for his job and dogged attention to detail. In a film that leans so hard into metatext with its reflection on Redford’s career, it’s undeniably  uncomfortable when that same mirror is reflected back on Affleck, a man whose on-screen warmth is marred by accusations of tremendous wrongdoing.

Everything about The Old Man & the Gun is easygoing. Tucker’s robberies are as relaxed as a gentle conversation: telling crying bank tellers they’re doing a great job, doing more damage with those big blue eyes than he’d ever do if he ever fired the gun he wields in each hit. Hunt’s pursuit is just as leisurely, scanning over paperwork at home with his kids before dancing with his wife late at night. It’s a story of charmers charming their way through life on both sides of the law; rather than playing with the tension of the job, Lowery is content to fill those spaces with gentlemanly charm and camaraderie. After all, it’s hard to fear for Tucker’s life in a car chase – even when he’s finally caught, he’ll just point his fingers like a gun at the officers and flash that winning smile of his. Lowery is content to live with these characters and show them to his audiences in hopes that they, too, will fall in love with them, and he succeeds mightily.

By all accounts, The Old Man & the Gun will be Redford’s last film before retiring from acting for good. If that’s really the case, it’s a hell of a final note – a smooth, charming caper dramedy that effectively functions as a retrospective of an illustrious career. By the same token, it also works wonders as a breezy meditation on the ways we find purpose in our lives, and the innate dignity of pursuing it. As Tucker says to Jewel, the secret to a good life is to “find one thing you love doing, and do it as long as you can.” In film, Redford seemed to find that true purpose, and The Old Man & the Gun is a satisfying way to ride off into the sunset.