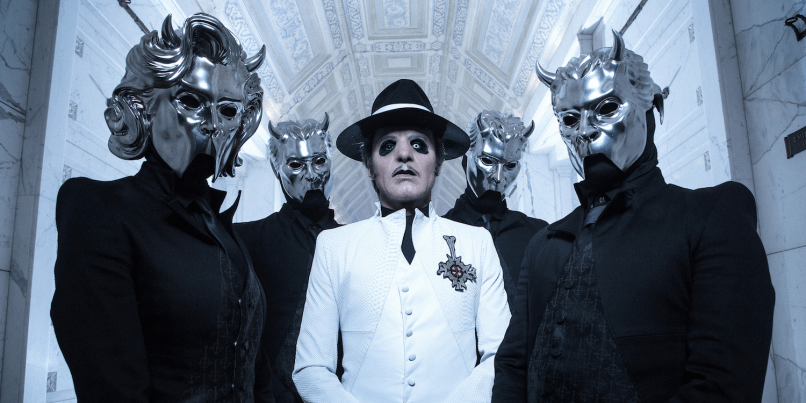 On the last day of May this year, Swedish metallers Ghost cut short their performance at Milwaukee’s Riverside Theater when one of their fans, Jeff Fortune, collapsed during the show. He was rushed to the hospital and, sadly, died of natural causes.

Out of respect for him and his family, Ghost chose to cancel the remainder of the set, issuing a statement on Twitter urging the other attendees to “please send the family your thoughts, prayers and respect their privacy during this time.”

Now, the band has announced that it will be returning to the venue on October 31st to give ticket holders of that original concert a chance to see the rest of the show. And Ghost are dedicating the hour-long set to the deceased fan and those who knew him.

Ghost will also be selling a special t-shirt, featuring the images of frontman Cardinal Copia and Jeff Fortune dressed in Michael Myers costumes, that night, with all the proceeds going to Fortune’s family.

Here’s the statement that was released on the Riverside Theater’s website about the new event:

Ghost will return to the Riverside Theater on October 31 to complete its concert that was cut short earlier this year.

The May 31 show was canceled at the close of Act I due to the tragic collapse and subsequent death of Ghost fan Jeff Fortune. Dedicating the October 31 performance to Mr Fortune and his family and friends, Ghost will perform the hour-long Act II for ticket holders who attended the original date.

Doors open at 7pm with Ghost taking the stage at 8pm. The show will start a bit early so guests can enjoy the previously-missed Act II of Ghost’s concert and still have plenty of time to go trick-or-treat or party afterwards.

Ghost will be out on tour this fall in support of their fourth studio album, Prequelle, which appears on our list of the Best Metal Albums of 2018 So Far. The new North American leg begins on October 25th at the Verizon Theater in Grand Prairie, Texas, and wraps up on December 15th at the Barclays Center in Brooklyn, N.Y. See a full list of dates here.