Kanye's rant was also met with boos from the studio audience 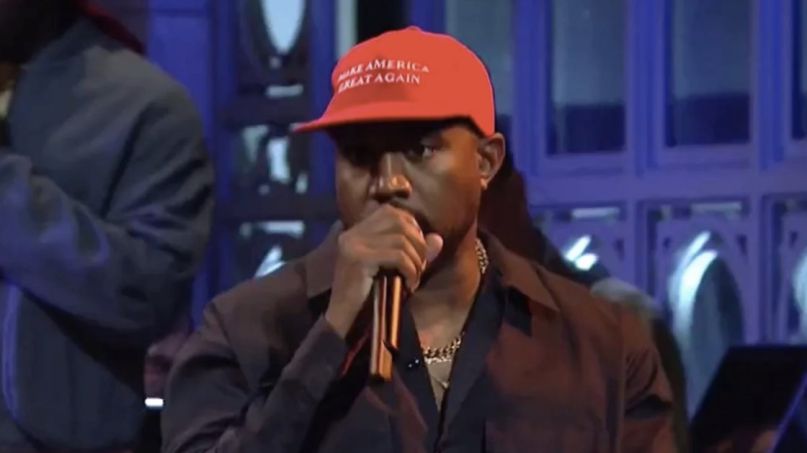 On air, Kanye may have bailed out Saturday Night Live from an otherwise lazy and predictable season 44 premiere episode. Off the air, however, his presence caused quite a bit of drama among the show’s cast and audience members.

During the episode’s end credits, Kanye returned to the stage for his third and final performance of the night, teaming up with Kid Cudi and 070 Shake for “Ghost Town”. As the performance was cut for time, TV viewers weren’t subjected to Kanye’s ensuing rant. Members of SNL’s cast and the studio audience weren’t as lucky.

Toward the end of “Ghost Town”, Kanye launched in a spoken-word diatribe, which was apparently prompted by backstage drama over his decision to wear a MAGA hat.

“They bullied me backstage. They said, ‘don’t go out there with that hat on. They bullied me backstage. They bullied me! And then they say I’m in a sunken place,” he said. “You want to see the sunken place? Okay, I’ma listen to ya’ll now — or I’ma put my Superman cape on, cuz this means you can’t tell me what to do. Follow your heart and stop following your mind. That’s how we’re controlled. That’s how we’re programmed. If you want the world to move forward, try love.”

Kanye also criticized the mainstream media’s perceived liberal bias, as well as America’s welfare system. He also defended Donald Trump against accusations of racism: “There’s so many times I talk to, like, a white person about this and they say, ‘How could you like Trump? He’s racist.’ Well, uh, if I was concerned about racism I would’ve moved out of America a long time ago,” he said.

Kanye’s rant was met with boos from the studio audience, and several of the show’s cast members, who were standing behind Kanye, looked visibly uncomfortable. Host Adam Driver and SNL cast member Chris Redd were among those who exited the stage before Kanye concluded.

Update – October 2nd: Speaking on Seth Meyers, Kenan Thompson said the SNL cast was unfairly held “hostage” by Kanye. “He voiced his opinion. Very loudly. For a long time. We’re all entitled to our opinion, I don’t know if that’s the moment, necessarily, to hold people hostage like that.”

“I felt so bad for those guys, because it’s hard to stand there and not be able to debate somebody who is going so far against your personal opinion, and just stand there and take it,” Thompson added.

What you didn’t see pic.twitter.com/rsXwdZ1e7I

All that being said, apparently Kanye is set to host a future episode of SNL this season.

had so much fun at SNL. Lorne agreed that I would host before the year is out. Need to set a date. Gonna be sooooooooo lit. In the words of Lil Pump …Esskeetit !