"If you have expensive tastes, drink MoneyBag" 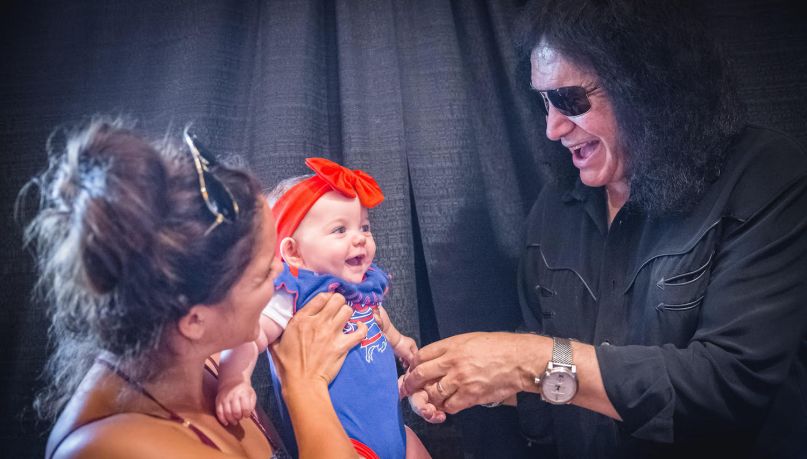 What does money have to do with the sensation of taking a swig of soda? Why absolutely nothing, of course! But that hasn’t stopped a Western New York soda company from partnering with KISS singer-bassist Gene Simmons. As the Wall Street Journal pointed out earlier this year, Simmons isn’t exactly reticent about licensing-out his name and iconic visage to a slew of commercial enterprises.

On Tuesday (September 18th), Simmons made an appearance to promote the new soda line at a Wegmans supermarket in the suburbs of Rochester. The three-city campaign takes Simmons to Syracuse on the 21st and also included a stop the week prior in Buffalo, about a half-hour drive from the town of Niagara Falls, where the soda is bottled.

Christened with the ultra-refreshing name MoneyBag, the premium cane sugar soda is made with all-natural flavors and colors and is packaged in eco-friendly glass bottles. For starters, MoneyBag comes in cola, diet cola, root beer, and ginger ale flavors, along with a cream-flavor line that will be available exclusively at 1,300 7-Eleven locations.

Never one to hold back on his ardor for making money, Simmons’ endorsement on the soda line’s official website reads as follows: “My MoneyBag sodas are made only with the most elite of ingredients. This is soda royalty!!! If you have expensive tastes, drink MoneyBag!”

For all the criticism Simmons might invite for his crass commercialism, up close and personal Simmons came off about as charming and funny — even cuddly — as mega-famous rock stars come. On making his entrance into the supermarket, Simmons bypassed the line of 250 fans who’d paid to see him and instead walked up to a random unsuspecting shopper in the produce section who looked up to find herself face-to-face with Simmons before he twirled her around like a dance partner.

“I wasn’t expecting that,” said the incredulous patron, aged 19.

“Did you know who he was?” asked a couple of enthused older fans.

Simmons spoke in a low voice to the paying customers (proceeds from the ticket sales were donated to a local charity) so it was impossible to hear what he was saying to them in the noisy bustle of a supermarket dining area, but almost every single one of them walked away beaming, including the little baby in the photo above.

After working his way through the line in what was essentially a glorified — but highly entertaining — autograph session (where fans were, understandably, only allowed to get their soda packs signed), Simmons took pictures with Wegmans staff and members of the security crew. He then spoke on camera for the local FOX News affiliate, exhorting the audience at home — again in an almost inaudibly quiet voice — to support federal law enforcement before being whisked off.

One night later, Simmons was on a much bigger stage, performing “Detroit Rock City” with his KISS bandmates on America’s Got Talent, and announcing that the legendary band will embark on one final tour.