Love It or Hate It, You’ll Never Forget Netflix’s Maniac 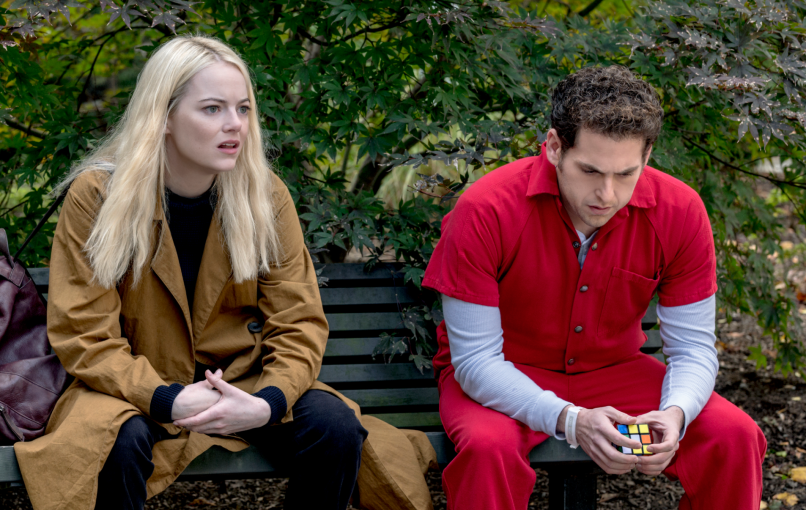 One’s enjoyment of Maniac is really going to depend on personal experience, and that reality exists on a few different levels. For one, an appreciation of creator Patrick Somerville‘s series is going to require at least a passing awareness of the Golden Era of Television, and how many different experiments have been performed on traditional episodic storytelling in the last five years alone. Maniac also deals with mental illness and its associated public manifestations in such a bracing manner that, good or bad, those who can relate to it will have a great deal to say. At large, that emotional connection is another key to enjoying the show, because if you don’t connect to it in some way, Maniac might otherwise be quite a chore to get through.

Maniac is trying in several different aspects, but that’s not always a bad thing. Except for when it decidedly is, anyway. Loosely (we stress very loosely) based on a 2014 Norwegian comedy series, Maniac enters the late stages of a pharmaceutical trial in order to spiral through the looking glass. Using a bio-organic super-computer with a personality of its own, and the latest in chemical breakthroughs, Neberdine Pharmaceutical Biotech is closing in on a world-changing discovery: a medication capable of curing any and all mental traumas. It would “heal the brain,” in so many words. Everything from PTSD to family trauma to everyday sadness would be instantly mendable.

The only flaw? It’s a drug for humans, thus requiring human test subjects, and Maniac makes clear from its earliest scenes that the biggest danger to the experiment isn’t GRTE, the super-computer invented by James K. Mantleray (Justin Theroux) to develop physiological connections with the test subjects. It’s the simple, unavoidable thing that ruins most science: human error. Maniac turns surreal before long, but its protagonists are always fallibly human, on both sides of the experiment.

On the one side is Dr. Azumi Fujita (Sonoya Mizuno), the head researcher on the GRTE project and the standard-bearer of Mantleray’s years of research. On the other are six people, four of whom met the many detailed requirements for participating in the study, which involves being sequestered in a lab for an indeterminate period and having your reactions to the new drug closely studied. The other two are the kind of wild variables for which no researcher could possibly account. There’s Owen Milgrim (Jonah Hill), the deeply troubled youngest son of a privileged family, who struggles to distinguish his innate lapses in reality with the years of abuse and trauma heaped on him by his WASPy family. And there’s Annie Landsberg (Emma Stone), who managed to get her hands on enough of the drug on the black market that she’s now addicted to its powerfully hallucinatory properties. But for both Annie and Owen, that’s not the only reason they’re there.

To get into the motives driving each of the show’s troubled dual protagonists is to give away much of the disorienting joy of working through Maniac. The series, as created by Somerville and directed in full by Cary Joji Fukunaga, is of a piece with so many other recent narrative experiments in how far off the reservation a show can run from its initial premise before it begins to grow tiring. Unlike a great number of those, however, Maniac exists at a strange intersection between dramatic highs and off-putting lows, occasionally hitting each within minutes of one another. Its influences will undoubtedly be listed in the coming months and years, but it most immediately recalls Legion, another series obsessed with neon colors and seemingly random digressions and the interior lives of deeply flawed people. Like that show, it’s sometimes transcendent in its emotional power. Also like that show, it’s sometimes too precious by half, which can work in some storytelling contexts and usually struggles in ones involving profound trauma.

Fukunaga’s direction will undoubtedly find its following, but it’s the kind of showy visual filmmaking that some audiences will love and others will absolutely loathe, without allowing for too much room in between. From the VHS-tinted introduction starring an aloof Theroux to Owen’s anachronistic office full of IBM-style word processors to the Blade Runner shadings in his vision of a near-futuristic New York City, Maniac is designed to be embraced with open arms by film school types who privilege aesthetic over all. But by the time the series reaches the lab, all Logan’s Run opacity and Refn swatches of primary color, Maniac has done a great deal of both showing and telling while occasionally struggling its way to a salient point.

That’s the series in microcosm, really: it’s beautiful, it’s stylish as hell, and at points it’s as interesting as anything on TV all year. When it goes off the rails, however, it’s hard to tell which way is up, or why one should care. To the point of the former, at least, Maniac‘s best attributes are front and center. Much has been made of Stone and Hill reuniting onscreen for the first time since Superbad 11 years ago, but in that time, both have changed substantially as performers. Hill recalls Adam Sandler’s poignant work in Punch Drunk Love here, turning Owen into the kind of man who’s been beaten into submission (figuratively and literally) for so many years that he can barely speak above a mumble or function on his own. Stone does some of her best work to date here as Annie, offering a more convincing version of her caustic Birdman mode as somebody who’s found a very particular way of dealing with trauma and finds herself holding onto it for dear life, no matter where it takes her.

The parts of Maniac left to interpretation tend to be the show’s best, because that’s where Somerville and Fukunaga find the show’s messy soul. Maniac is as much a show about the wounds we can’t close (or refuse to), and in each of the heady “trip” sequences kicked off by the pills, only a few things tether the viewer to the familiar. There’s always either Hill or Stone, and the people they recognize. For Owen, it’s his severe father Porter (Gabriel Byrne) and his shitheel older brother Jed (Billy Magnussen, terrific). For Annie, it’s her sister Ellie (Julia Garner), from whom she’s been estranged for some time. When Maniac really digs into the roots of the trauma driving both Owen and Annie mad, it recalls the most evocative sequences of Eternal Sunshine of the Spotless Mind: trips through the consciousness that drive at how the mind will never ultimately win out over the heart.

When it leaves the hallucinations, things get shakier. Maniac works in a riot of themes and modes as it unfolds, and by far the least engaging of them is the psychology going on behind the control panel. While Mizuno and Theroux both do terrific work, as scientists from wildly different schools of thought hoping to change the world as it’s going mad around them, the lab sequences leave some of the season’s later emotional revelations feeling flatter than they should. Where Annie and Owen’s adventures are at least enthralling whether or not they work (it’s about a 60/40 ratio in favor), Fujita and Mantleray’s struggles to figure out why GRTE isn’t working the way they want seem to be present for the sole sake of filling in the dramatic blanks that the hallucinations leave so thrillingly vague. Sure, it’s their arc that leads to a fantastic cameo performance down the stretch, but it often struggles to match the freewheeling verve of the central story.

While Maniac‘s hyper-stylization occasionally works to heighten the stakes between each of its blissfully short episodes (it runs the gamut from about 25-45 minutes per), it also occasionally steers the show into lurid places that exist at odds with its moments of genuine, earned sentiment. Maniac occasionally deals in the kind of hyper-violence that both prestige TV and Netflix in particular have made so fashionable of late, but Fukunaga carries several of these sequences to such a vicious extreme that they feel culled from an entirely different series. There’s a clear thread being drawn between interior anguish and exterior savagery, but it’s never defined well enough to make a man being cleaved in half by a shotgun blast seem like it belongs in the slightest.

It also tends to diminish one of the series’ biggest conflicts, and the one that earns most of its power: Are people like Owen and Annie capable of being “all right”? Maniac has a couple of genuinely stunning sequences that engage with this concept, but it also ultimately adopts a strangely ambiguous attitude about the value of medication in mending emotional wounds that’s disarming at best and reminiscent of Garden State‘s insufferably smug “quit the pills, maaaaaan” attitude at worst. Maniac is certainly far less simplistic in its examination of mental illness and the various forms of suffering it can inflict on those with it, but that shouldn’t allow the show to entirely sidestep the issue of it flirting with the suggestion that more illness is psychosomatic than not.

As you’ve probably worked out by now, Maniac is what the kids on Twitter refer to as “a lot.” It’s personal and broad, emotionally raw and visually indulgent, compelling even when it’s infuriating from time to time. In that sense, it’s exactly the kind of series that could only exist in this particular moment: an audacious challenge that’s also at least a little bit up its own ass, and knows and acknowledges it with frequency. It’s not going to be for everybody, but it’s absolutely going to stick with everybody for a while. Whether they love or hate it might just depend on what they can see of themselves in it.