"There are very few people that have gone through what they have, losing everything in a day" 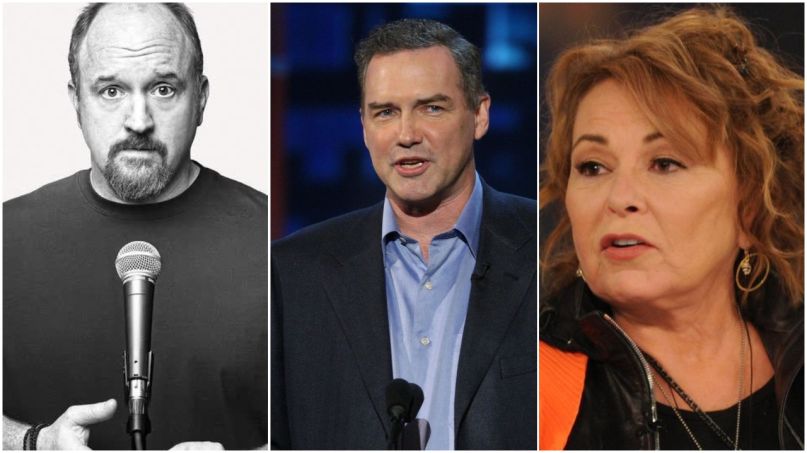 The legendary Norm Macdonald has a new Netflix talk show on the horizon and, if it’s anything like his Norm Macdonald Live web series, it’s gonna be really, really good. It looks like it will arrive with its own share of controversy, however, as the comedian just dropped some unfortunate takes in a new interview with The Hollywood Reporter. In it, he revealed that he served as a friend and confidant for both Roseanne Barr and Louis C.K. in the wake of their career-imploding scandals, the former for her incendiary and racist tweets and the latter for a history of sexual misconduct.

He even encouraged the two to commiserate. “Roseanne was so broken up [after her show’s reboot was canceled] that I got Louis to call her, even though Roseanne was very hard on Louis before that,” he said. “But she was just so broken and just crying constantly.” He added, “They both said they had a good conversation and were just giving any advice you could give to each other. There would be no way for me to even understand that advice, because who has ever gone through such a thing? All their work in their entire life being wiped out in a single day, a moment.”

While Macdonald’s empathy is admirable, his comments indicate that it comes at the cost of marginalizing their victims. “There are very few people that have gone through what they have, losing everything in a day. Of course, people will go, “What about the victims?” But you know what? The victims didn’t have to go through that.” C’mon, dude.

The majority of Macdonald’s comments won’t surprise anyone those with his standup or web series, where he routinely mines comedy from the logic behind a number of progressive issues, but several of his comments here come across as uncharacteristically callous, especially when he all but disregards the account of Chloe Dykstra, who, earlier this year, thoroughly documented the abusive behavior of a former boyfriend revealed to be TV host Chris Hardwick. “I’m happy the #MeToo movement has slowed down a little bit,” he said. “It used to be, ‘One hundred women can’t be lying.’ And then it became, ‘One woman can’t lie.’ And that became, ‘I believe all women.’ And then you’re like, ‘What?’ Like, that Chris Hardwick guy I really thought got the blunt end of the stick there.”

Norm Macdonald Has a Show premieres this Friday, September 14th.

Update: In a follow-up tweet, Macdonald sought to clean up his comments and apologized for “minimizing the pain” of Roseanne’s and Louis C.K.’s victims.

Roseanne and Louis have both been very good friends of mine for many years. They both made terrible mistakes and I would never defend their actions. If my words sounded like I was minimizing the pain that their victims feel to this day, I am deeply sorry.