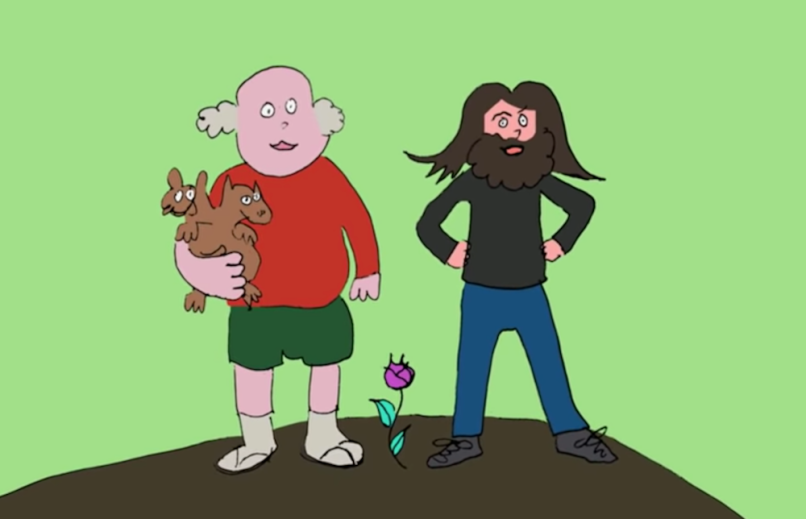 On November 2nd, Tenacious D are scheduled to drop a new album called Post-Apocalypto, which features drums from Foo Fighters frontman Dave Grohl. For fans who don’t want to wait until then for new material, they’re in luck: The comedy rock duo of Jack Black and Kyle Gass has just launched its corresponding YouTube series of the same name which boasts all-new music from the album.

The animated series is comprised of drawings from Black himself, and every character is voiced by Black and Gass. Today’s episode — the first of six to be released every Friday leading up to the LP — finds Tenacious D in the midst of an atomic bomb crisis. They hole up in a 1950s Frigidaire and successfully survive the explosion, only to discover that not much else has. Tenacious D aren’t totally alone though — the bomb’s aftermath has spawned some freakish creatures, including a two-headed dog they decide to name Hope, because even in their cruel, harsh existence, they’re still leaning on some optimism.

This initial episode of the Post-Apocalypto series is aptly titled “Hope”, and boasts a new album track that’s also dubbed “Hope”. Check out both below.

To help promote the kick-off of their animated series, Black and Gass made a surprise appearance on Jimmy Kimmel Live! on Thursday. Tenacious D apparently thought they were scheduled to perform, but Kimmel says they’re about six weeks too early. The two-piece still make a pretty badass entrance and give out (see: chuck into the crowd) free burritos, though, so it’s a win-win for everyone involved. Watch that segment below.

Tenacious D will support Post-Apocalypto (series and album) with a North American tour that begins in early October. You can grab tickets here. Also, in case you missed it, watch Black channel Bob Ross and paint Gass.