Absolutely Not share the Origins of their Halloween-themed new single, “Medicine Man”: Stream 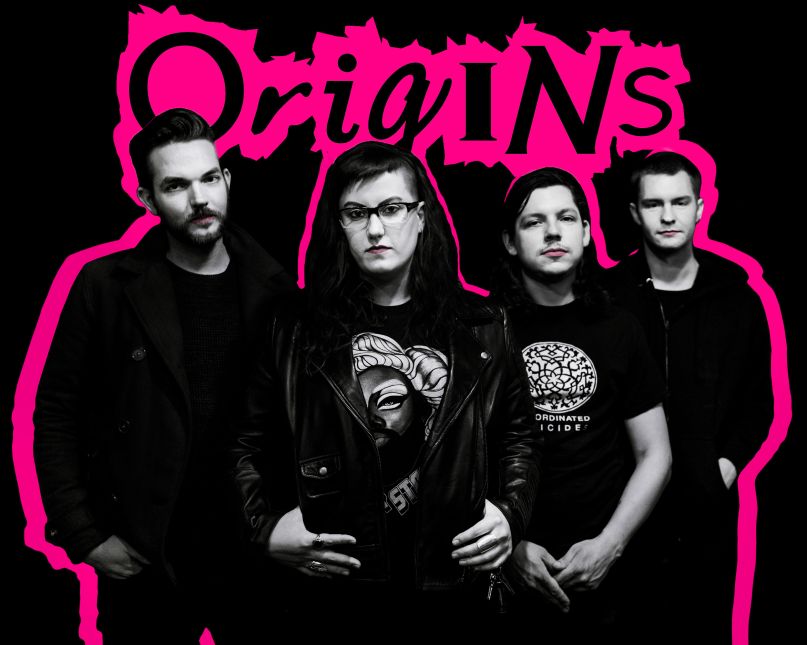 Origins is a new music feature that tasks an artist with digging into the influences behind their latest single.

Absolutely Not is laughing and screaming at the same time, with the Chicago-based post-punk outfit regularly interlacing a kaleidoscopic strain of humor into loud, furious riffs plucked from the hottest pits of hell. They scorched the earth with last year’s Errors, and now the glammy punks are back with a brand new single, “Medicine Man”, which you should add to your Halloween playlist right this minute.

Originally released on cassette for a limited time, the song tells the story of, in singer Donnie Moore’s words, “two drug-addicted goth kids.” “Hey crazy witch don’t bleed on my lawn,” they shriek on the abrasive, catchy-as-all-hell cut. “Hey crazy witch don’t bleed, he’s in love with ya!” This is trick-or-treating on mescaline music, the kind you can’t help but cackle along to.

“It’s still a part of our live set, and has always been a fan favorite, so we felt it deserved to be re-recorded and available digitally,” Moore tells Consequence of Sound. He calls it “just a silly glam punk song,” though we’d say that’s underselling it. Decide for yourself below.

For more on “Medicine Man”, Moore has broken down the song’s Origins.

I love how catchy and playful this song is even though it’s incredibly spazzy and a bit confrontational. I have a similar mindset with most of my songwriting: aggressive pop. This band, especially their first three records, had a huge impact on me when I was a teenager. They weren’t just new wave or punk or pop-rock, they were were all three wrapped up with a little ribbon and a card attached that said thank you for being a friend.

These two created some real magic visually and aurally between the late ’80s and late ’90s. All of those films (Batman, Beetlejuice, etc) and soundtracks have stood the test of time in my opinion, and still influence me to this day. It’s a universe I’d definitely live in if I was able.

I’ve battled anxiety on and off most of my life, it’s a constant roller coaster. Sometimes it makes me introverted, and turn to things like dark rooms and copious amounts of weed, other times it forces me to be extroverted in fear that being alone in the dark all day will further my worries and insanity. Even though I can very easily say that I despise my anxiety, I do think it has made me stronger and more in touch with my emotions. Expression is key in this business and life in general, so honestly if I was “normal” all day everyday, I don’t know if my music would be what it was and has grown into throughout the years.

The leaves change and naturally decorate the city with beautiful hues of orange and brown, Halloween happens, the weather changes… seriously what’s not to like?! I wait for fall the entire year. People are usually in better moods, it’s not deathly hot, or freezing cold, it just is. It’s also a great time of the year to do productive things, especially with music. Did I also mention my birthday is in October? That helps.

What can I say that hasn’t been said a million times already. They seem to revel in racism, homophobia, enabling rapists, and making life seem more like a Nazi boot camp than a pleasant environment to be creative, raise a family, or just be comfortable living happily. I’m a gay man and a good majority of friends are POC or LGBTQIA, so maybe this current political climate affects me more than just your average white person with money, but I have to think it’s affecting EVERYONE in some way at this point. I’m doing my best to see the light at the end of the tunnel, and channel my anger and frustration into writing music and creating events that are safe spaces for like-minded people, but goddamn it is hard some days. SPREAD LOVE NOT HATE, IT’S REALLY NOT THAT DIFFICULT.

Absolutely Not have a few shows on the calendar, including a slot opening for Mucca Pazza in Chicago on New Year’s Eve. Check out the dates below, where you can catch Meat Wave‘s Chris Sutter, who recently joined their live band.