Album of the Week: Kurt Vile’s Sonic Worlds Remain Vivid and Worth Exploring on Bottle It In

The rambling songwriter's artistic trajectory remains, as always, on an upward slant 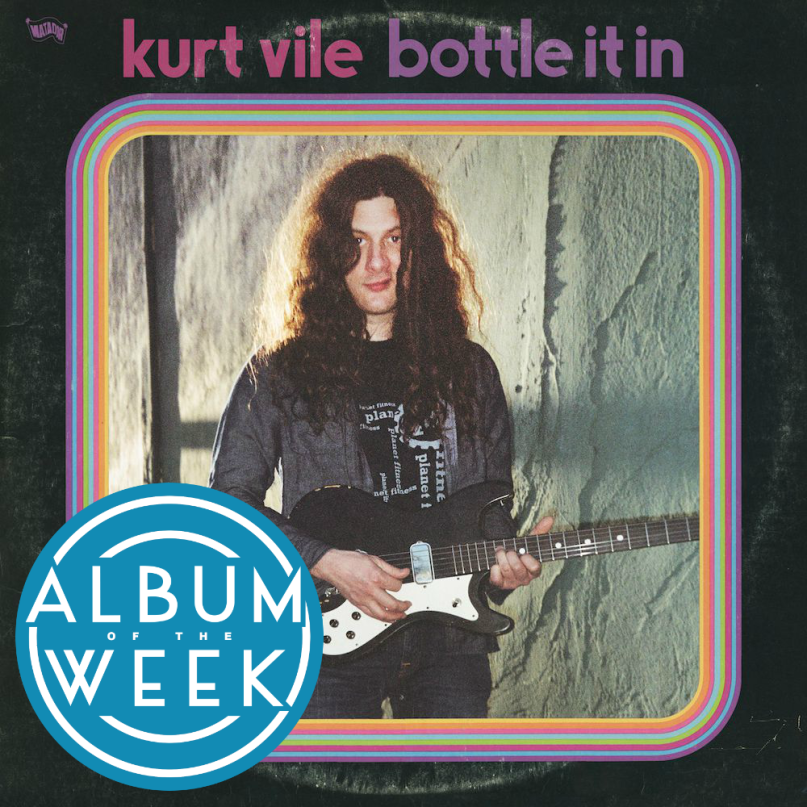 The Lowdown: After following up an improbable AAA #1 single (2015’s “Pretty Pimpin”) with a collaborative record with Courtney Barnett, reigning king of slacker rock Kurt Vile returns with his first solo record in three years, one recorded in fits and starts during two years in which Vile became a Jeopardy! answer, opened for Neil Young, and suffered a self-described mental breakdown.

The Good: Originally scheduled for a Spring release, Bottle It In’s October arrival feels like fate; marrying Vile’s languid whatever’s-clever-ism with reflections on aging, success, and the possibilities of happiness, the record exudes the same subtle gloom shared by that first fall day when the sun sets before six p.m.

This bittersweetness also results in some of Vile’s most direct songwriting; whether he’s penning a love letter to Philadelphia parking hacks (“Loading Zones”), shaking off loneliness (“Yeah Bones”), or wrestling with the tropes and trials associated with life as an aging hipster (“One Trick Ponies”, “Rollin with the Flow”), Vile delivers focused tunes that retain his typical shrugging restlessness while resisting the urge to wander too far afield.

When the jams do come, the record’s creeping sense of foreboding gets the chance to fully emerge; from the guitar that subsumes Vile’s voice on “Skinny Mini” to the thrumming drone and piano loops that tighten the title track’s chest to the preloaded scratches and warps that amplify “Cold Was the Wind” and its hungover weariness, Vile’s sonic worlds remain vivid and able to be explored.

The Bad: As with any artist who trades in stream-of-consciousness work, the payoff from Vile’s unstructured meanderings hinges on whether or not these joke-y, self-aware rambles lead him anywhere revelatory along the way. On Bottle It In, the results can be scattershot; “Mutinies” traffics in Boomer-meme social commentary about computers and smartphones, “Check Baby” sends listeners on an empty meta chase that’s only saved by the song’s gold-star solo work, and “Bassackwards” squanders imagery inspired by rising hate and sea levels in a mush-mouthed metaphor all the bite of a half-scary dream. When heard in such close proximity to Vile’s tighter work, they suffer by comparison.

The Verdict: After spending the better part of his adult life as your favorite artist’s favorite artist, Kurt Vile approaches his 40s finally accompanied by the expectations his work has always deserved. He meets them on Bottle It In, through a combination of singles that aspire to modern rock triumphs of “Pretty Pimpin” and more sprawling work that once again play to Vile’s strengths as a weaver of gentle psych trances. These woozy explorations don’t always result in anything more than a pleasant 10 minutes or so, but taken together, they combine to form one more data point for the argument that Kurt Vile’s artistic trajectory remains, as always, on an upward slant.

Essential Tracks: “Yeah Bones”, “Loading Zones”, and “Bottle It In”