The life-size statue was commissioned by Cornell’s wife Vicky 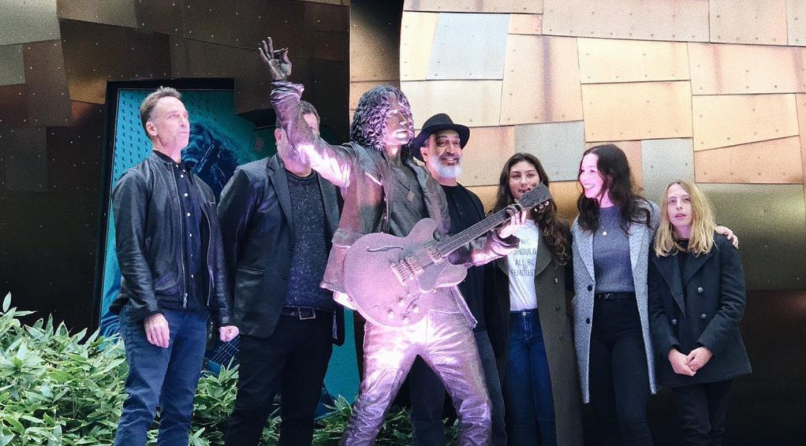 A new statue immortalizing Soundgarden frontman Chris Cornell was unveiled in the singer’s hometown of Seattle on Sunday. Cornell’s family and friends, including members of Soundgarden, were on hand for the unveiling ceremony, which took place at Seattle’s Museum of Pop Culture.

The life-size statue was commissioned by Cornell’s wife Vicky and designed by artist Nick Marra. Featuring his signature boots, dog tag, long locks, and Gibson Memphis guitar, the statue will be on display at the Museum of Pop Culture for all of his fans to see.

The weather was overcast during the ceremony, which seemed fitting to Jasen Emmons, Artistic Director at MoPOP. “The clouds tonight somehow feel right for someone who brought us so much dark, beautiful music,” Emmons said during his remarks.

“He was the voice of a generation, and an artist that continues to draw us closer together, forever,” added Vicky Cornell.

See video of the unveiling and photos of the statue below.

The kids of #ChrisCornell unveil his statue that will now forever stand in his memory in #Seattle. #KOMONews #MoPOP pic.twitter.com/aV1ha2Dc4Y

Cornell was found dead in a Detroit hotel room on May 18th, 2017, just hours after a Soundgarden concert. Following an autopsy, a medical examiner ruled his death as a suicide. A new posthumous box set compiling material from Cornell’s various bands, including Soundgarden, Temple of the Dog, and Audioslave, as well as music from his solo career, will be released in November.