Ed Sheeran is a big fan of Korn and Marilyn Manson

"[He] just listened to ‘Freak on a Leash' earlier today" 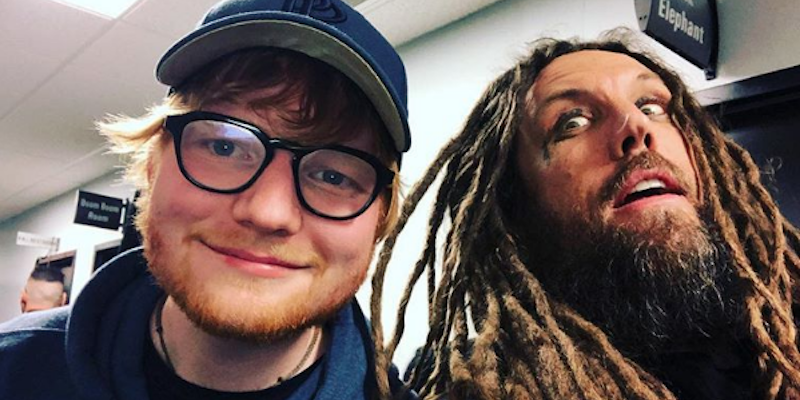 There’s nothing really shocking about Ed Sheeran’s chart-topping brand of hot adult contemporary music other than its enormous popularity, but the British crooner is a fan of shock-rocker Marilyn Manson … and of nu-metal pioneers Korn, for that matter.

Korn are currently holed up in Nashville, Tennessee, working on their new album, and guitarists Brian “Head” Welch and James “Munky” Shaffer decided to take in Marilyn Manson’s concert last night (October 22nd) in the town affectionately known as Music City. It was backstage at the show where Welch ran into none other than Ed Sheeran, who expressed his love for Korn to the guitarist.

Welch posted a picture of himself and Sheeran, captioned, “Of course @teddysphotos [Sheeran’s Instagram handle] would walk right past me and @munky_korn @marilynmanson concert and tell us he just listened to Freak On a Leash earlier today. Why should we be surprised?”

Of course @teddysphotos would walk right past me and @munky_korn at @marilynmanson concert and tell us he just listened to Freak On a Leash earlier today. Why should we be surprised? 😆

Perhaps Sheeran is trying to regain his rock cred after being called out by Dave Grohl at a recent Foo Fighters concert, but he did once cover metal songs on The Tonight Show Starring Jimmy Fallon, so we’ll give him the benefit of the doubt … this time!