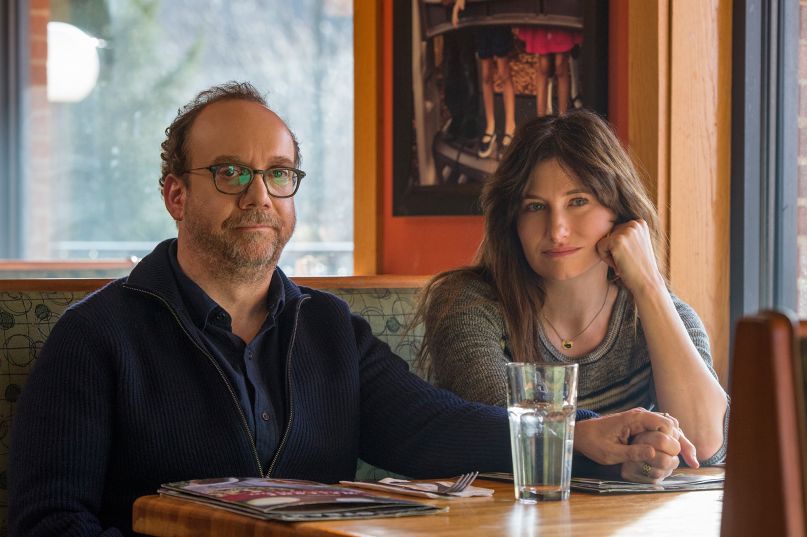 The Pitch: Having spent their 20s and 30s building enviably bohemian lives as East Village creative types, Rachel (Kathryn Hahn) and Richard (Paul Giamatti) suddenly find themselves over 40 and desperate to start a family. Or, at least, they desperately want to have a baby; how they feel about the idea of actually raising a kid is never quite clear. Unable to conceive on their own, they’re pursuing a domestic adoption while simultaneously attempting IVF — two equally messy, bureaucracy-filled paths that have consumed their lives and their marriage for the past few years. Coincidentally, however, their 25-year-old step-niece Sadie (newcomer Kayli Carter) calls to ask if she can crash at their apartment, just as their doctor tentatively suggests that they might consider using an egg donor.

On Pins And Needles: For her first film since 2007’s Savages, writer/director Tamara Jenkins has made a movie about cycles: cycles of life, cycles of a marriage, and the monthly hormonal cycles that are carefully monitored by women struggling to get pregnant. Having been through IVF herself, Jenkins renders the process in excruciating, darkly comic detail. We feel the pain of each needle jab and the awkwardness of each vaginal examination. (Denis O’Hare nearly steals the film as Rachel and Richard’s professionally peppy, slightly unnerving doctor). Rachel and Richard aren’t particularly sentimental people, and Jenkins doesn’t sentimentalize their journey, but she does find enormous empathy for almost everyone involved in their increasingly complicated struggle to become parents. The movie’s dark, dry comedic tone often gives way to bursts of deep emotion as Rachel and Richard alternate between railing against the world and railing against each other. We don’t see what their marriage was like before they became “fertility junkies” — as an exasperated relative calls them — but the intimate way in which they fight paradoxically reveals the strength of their partnership.

Relatability In Specificity: Jenkins isn’t exactly treading new cinematic ground in exploring the lives of an insular group of relatively privileged New York artists, but her version of this story feels particularly relatable because of the incredible specificity of its world. Rachel and Richard’s cozy, book-filled East Village apartment is a dream of detailed production design, while the film’s immersive sound design roots it in New York City just as much as its location shooting. Private Life mostly avoids doling out clunky exposition, but one gets the sense that Jenkins could answer even the most minute questions about her characters’ backstories — from how Richard made the career transition from avant-garde theater director to artisanal pickle salesman, to the exact publications Rachel has written for over the years. Plot-wise, Private Life makes a few strange swerves, some of which are overly melodramatic and others that feel almost sitcom-esque. Yet even in those weaker moments, Jenkins finds at least some element of textural specificity — like a Thanksgiving family fight that transitions to the laundry room, because Sadie is in the middle of washing the dirty laundry she brought home.

Stealing The Show: With its relaxed pacing and slice-of-life storytelling,Private Life is first and foremost a showcase for its actors, and Jenkins has assembled an impressive ensemble. Hahn and Giamatti are both stellar in roles that play to their strengths while also giving them new notes to hit. Hahn is pricklier than she’s often allowed to be, while Giamatti is warmer than he usually is onscreen. Both are hilarious and heartbreaking in equal measure. Carter, meanwhile, is a great young find, who expertly calibrates Sadie’s youthful behavior so that it’s never quite clear whether she’s wise beyond her years or impulsively rash; she often seems to be both at the same time. The film’s only real casting misstep is Molly Shannon as Sadie’s judgmental, menopausal mother — a strangely written character that Shannon can’t quite figure out how to play.

The Verdict: In the subgenre of indie dramedies about affluent people dealing with domestic problems, Private Life is a more than worthy entry. Yet despite its carefully measured comedic voice and the detail with which it depicts the IVF process, the film never quite manages to feel like something completely groundbreaking. At just over two hours it isn’t necessarily too long — the length helps convey Rachel and Richard’s monotonous journey — but the film is definitely weighed down by too many shaggy subplots. Given its ease of accessibility on Netflix, it’s worth seeking out Private Life for its stellar performances and Jenkins’ detailed world-building. But it perhaps doesn’t need to immediately hop to the top of the queue.

Where’s It Playing: Private Life is now available on Netflix, as well as in select theaters.