Film Review: The Hate U Give Makes the Personal Loss of Police Brutality Palpable 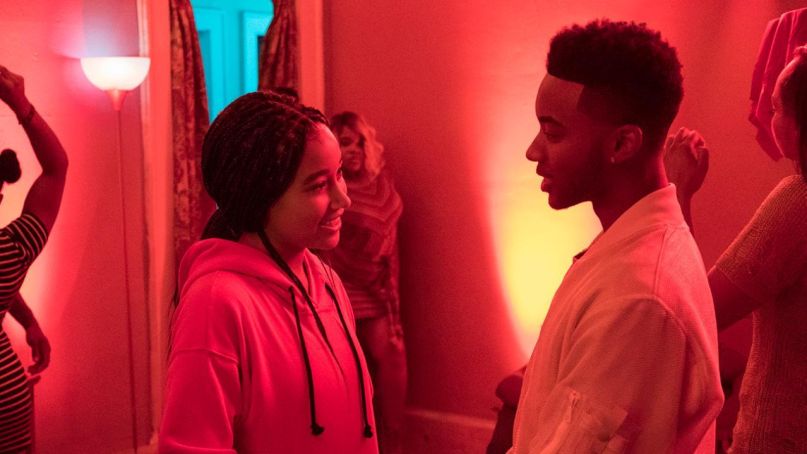 The Pitch:  An adaptation of Angie Thomas’ 2017 novel, The Hate U Give chronicles the troubled life of Starr Carter (Amandla Stenberg, The Hunger Games). Starr’s a 16-year-old living in Garden Heights, a drug-afflicted neighborhood in Hinesville, Georgia, with her parents and two brothers. Her father Maverick (Russell Hornsby) and mother Lisa (Regina Hall) send her to an affluent and predominantly white high school in a nearby community, in hopes of giving Starr a chance to leave her embattled roots. Like many teens, she worries about boys, friendships, and family. Unlike many teens, she witnesses firsthand the police murder of an old friend, Khalil (Algee Smith).

Riding a line of race and riot, life and death, Starr must decide if she has the courage to testify in front of a grand jury. She must decide what matters most, who she is, and who she wants to be.

Page to Screen: When Angie Thomas began writing The Hate U Give, it was a short, a creative writing project driven by the 2009 police shooting of Oscar Grant. What a world of difference a decade can make to for a work of art’s potential as a statement. That’s an eternity of dash-cam and cell phone footage since, and that very pain, that deathly repetitive history of minority plight holds firm within George Tillman Jr.’s strong adaptation. And it’s in remembrance of those tragedies that The Hate U Give thrives. No, this is not exploitation. Far from it. This is a social justice fable of a higher order, an empathetic, understandable, and reactive drama about tough times, a loss of innocence, and other grand-level concepts

The Hate U Give is a blend, in plainest terms. It is reactionary, alive with the tumult of every lost life at the hands of the police. But it is also very much a Fox 2000 production: modestly budgeted, plain-spoken, accessible, and ultimately quite impactful. It’s a rare privilege to walk in someone else’s shoes, and we are invited into Starr’s. She’s a fully realized, amiable teen. Through voiceover (a screenwriter’s best friend in literary adaptation, take that for what you will), nothing is spared. She tolerates her white friends’ appropriation of black culture (“someone watched Straight Outta Compton again last night”). Her silence and willingness to hear her father’s speech on the inevitability of being pulled over when black sends a needed chill. Her defiant voice and confidence to speak is felt when she shares her story of Khalil’s life over a megaphone, moments before a riot.

Perhaps it’s easier to understand when Starr shares her feelings with such purity. Starr experiences shock, loss, grief, fear, angst, truth, strength. These are the universal themes of The Hate U Give. But in spite of those commonalities, Tillman Jr. and his lead never lets you assume that we can all share these feelings. The Hate U Give is here to remind us of the hardship that is being born black in America. A “trap,” it’s called at one point.

The Love We Have: The Hate U Give deserves wide eyes and open hearts.

The Hate U Give firmly embraces its style of big studio narrative, and it effectively utilizes the tools of old school tear jerker and teen drama. When drama suddenly, sporadically happens – police magically appear, after a sudden physical altercation – it’s still rooted in a familiar reality. Where there’s a quibble, right around the corner there’s always a great moment. Starr’s uprising on the streets. Starr giving a learning moment with a hairbrush to illustrate that it’s not a gun. There is urgency you can’t ignore here. Tear gas. Walkouts. Dates and dances and the stuff of youth layered with simmering tension. Fire and calamity and protests against a system (judicial, socioeconomic, you name it) utterly broken.

For these reasons, we have to give a little love back to this movie.

The Verdict: Starr’s struggles of identity, of truth, of justice, of adolescence and womanhood capture the tear-filled feelings of daily American crisis. Khalil’s death hits hard in the wake of Tamir Rice, Laquan MacDonald, and so many other black youths killed by the police on camera. Starr’s anxiety to speak up is rooted in so many other women’s fear of coming forward. While it deals in the traditional melodramatics, straight from the ‘ol Hollywood emotion factory, Tillman Jr.’s aim seems true. The Hate U Give feels so Right Damn Now that you could leave the theater and see its stories on the nightly news.

Where’s It Playing?: The Hate U Give is rolling into a larger expansion this weekend. October 19th, the official release, is when the movie arrives on 2,300 screens. Make plans.