Film Review: The Oath Toys with Trump-Era Anxieties Around the Thanksgiving Table 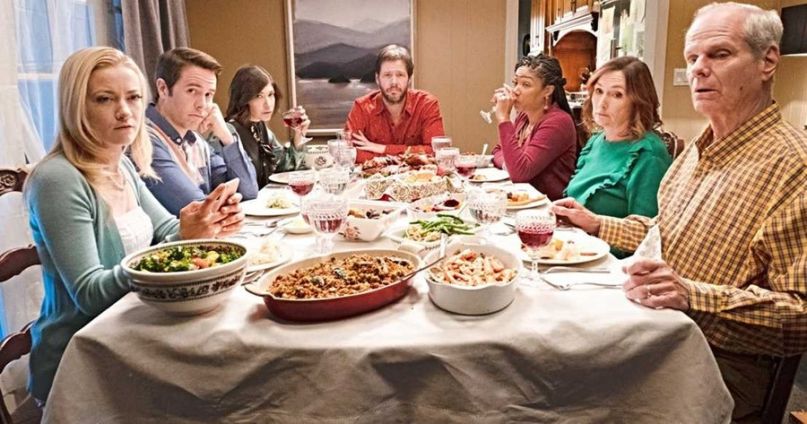 The Pitch: If you think Thanksgiving dinners with your conservative relatives are bad enough, be thankful we’re not (yet) in a world where our President requires everyone to sign a loyalty oath by Black Friday. This news distresses the politically-anxious Chris (Ike Barinholtz), who’s always looking down at his cell phone to find a new horror to be mortified by, much to the chagrin of his sympathetic but exhausted wife Kai (Tiffany Haddish).

However, as his relatives come to visit for Turkey Day, including his understanding sister Alice (Carrie Brownstein), overbearing mother Eleanor (Nora Dunn), quiet stepdad Hank (Chris Ellis), loudmouth conservative brother Pat (Jon Barinholtz) and his Tomi Lahren-esque new girlfriend Abbie (Meredith Hagner), the normal work of avoiding politics at the table inevitably strains under the weight of this new policy. This is made even worse when, on the expiration day, two federal agents (Billy Magnussen and John Cho) come knocking on Chris’ door.

Raging Election: If The Oath is a Thanksgiving feast, timeliness is the can-shaped cranberry sauce that infuses every dish on the table with sweet, sumptuous flavor. Barinholtz, who also wrote and directed the film, is clearly operating from a desire to unpack the strange, infuriating, confused emotions that most Americans felt in November of 2016. For many, Thanksgiving is a dreaded political battleground where younger progressives butt heads with older conservatives, forced into the same room by familial tradition. In these situations, just turning on the news is a political act, a tactic The Oath uses to great effect. In such politically divided times as these, partisan rifts feel like canyons, and The Oath’s first two acts do a fantastic job of capturing that boiling stew of political resentment and conversational restraint that so often soils the family table.

Intriguingly (but with little surprise), Barinholtz doesn’t let either side truly off the hook. His Chris is the very model of a self-righteous, news-addicted liberal, someone whose heart is in the right place but whose justifiable fury at the actions of his government manifests in self-destructive rage and a distinct loss of perspective. Yes, his brother’s ultra-conservative girlfriend keeps sharing alt-right talking points from “@fatasspatriot,” and his family is infuriatingly unconcerned with news reports of riots and activists being gunned down in the streets. But his own refusal to sign the Oath quickly turns into a crusade, one he occasionally prioritizes over the safety of his family.

The Urge to Purge: The Oath is clearly modeled after The Purge, with more than a little Get Out in its deft interweaving of wry humor interspersed with its ‘70s social thriller attributes. Barinholtz proves himself a fine director of mid-range, claustrophobic thrills and ensemble comedy in equal measure, keeping the focus on this extended family as a microcosm for a nation in crisis. Barinholtz and Haddish, in particular, get to plumb layers of performance heretofore unseen. Barinholtz’s signature intensity is front and center as the increasingly manic Chris, but modulated into something scarier and more desperate. Haddish is refreshingly restrained, taking a break from the over-the-top characters she’s played since Girls Trip to portray someone much more grounded. (Don’t worry; she still gets to explode in the way only she can, and the rarity makes each outburst all the sweeter.)

Unfortunately, while The Oath crackles as an incisive satire of politically-fraught Thanksgiving family dynamics in its first two acts, the third goes off the rails in ways that don’t entirely satisfy. It’s really difficult to say too muchmore without spoiling the twists and turns The Oath attempts to take, but one may be left both entertained and perplexed by the hard right turns the story takes in an effort to lend the small-scale familial conflict some larger stakes. While these curveballs are entertaining in their own right, and Barinholtz and company make a meal out of the increasing intensity of the proceedings, at times these scenes feel born of an entirely different movie. (That said, one particular reaction from Dunn’s inquisitive mother in this section offers one of the film’s biggest, most unexpected laughs.) As the scope of the family’s conflict expands outside their own squabbles, the focus shifts elsewhere to mild disappointment.

The Verdict: For much of its runtime, The Oath is a pitch-perfect extrapolation of the polarized, divided times the nation is going through, and the many ways in which they influence the average home. The Thanksgiving table is a perfect battleground for these heavily entrenched political lines, with Barinholtz’s smart, nuanced script pulling no punches. While the satire definitely loses some of its bite in its wild, unpredictable closer, the film still takes Barinholtz and Haddish to fascinating places as performers – neither of them have been as intense or vulnerable onscreen to date. It would have been nice for the rising stakes to tie more closely into the conflict of the first two acts, instead of dumping those discussions for a Trump-era version of Mrs. Miniver. But as is, The Oath remains a refreshingly stark, incisive commentary on the deep-seated emotions modern politics brings out in everybody right now.

Where’s It Playing?: The Oath vows to make your next family Thanksgiving even more awkward starting this Friday, October 12th.