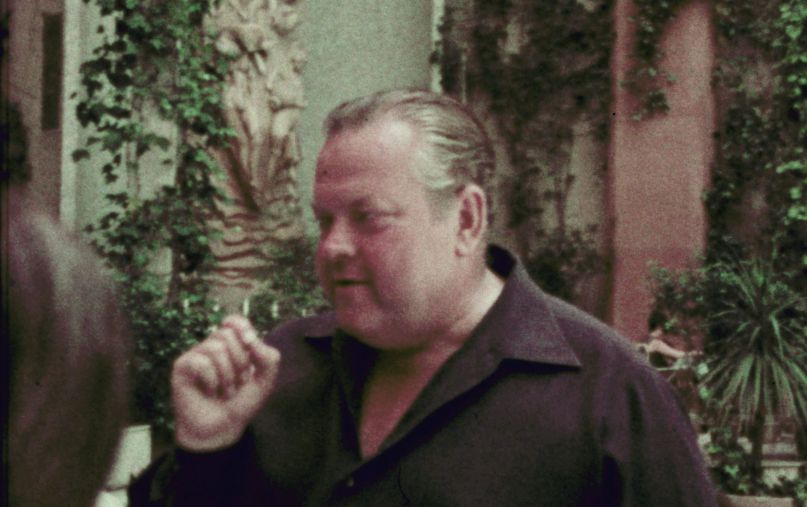 The Pitch: Morgan Neville (Won’t You Be My Neighbor?) directs They’ll Love Me When I’m Dead, a swift and sensationalistic look at the life and times of Orson Welles, his film career and fame, and most specifically, the long and tortured production (read: nightmare) of The Other Side of the Wind. Spooling through miles of film including Wind, TV interviews, movie clips, and even that infamous champagne commercial, Neville assembles both a pulpy Hollywood tome and a flashy love letter to the aura and artistry of Welles.

Well, Well, Welles: On November 2, Netflix will release Orson Welles’ long-thought-lost epic, The Other Side of the Wind. Netflix took roughly 100 hours of lost progress and made it – dare we say – quite watchable. It’s a minor miracle. From a lost name in the echoes of cinema comes a real movie. It’s amazing, hyperbolically speaking, and the final product is a sight to see.

But characterization and critique of The Other Side of the Wind demands a history of Orson Welles and Welles’ often frazzled career. What better opportunity to release a companion documentary on Wind’s winding road to the screen, than to pair it with the release of Welles’ coulda-been-a-classic?

This isn’t just Netflix kissing itself in the mirror, thank goodness. You can watch featurettes about Wind’s editorial miracles online. As director, Neville strives for something a little bigger. A little more historical. A little something that’s passionately for Orson. Neville opens, unpacks, and flails all the juiciest tidbits together within a plucky 90-minute framing.

Lurking in storage, held up by financiers and Welles’ own stubbornness for years, Wind was to be a sort of New Wave comeback for a besotted director in the mid-‘70s. It was to be a true independent scream on the state of Hollywood that would run parallel to Welles’ fledgling career, although he never admitted it. He filmed for most of the top half of the ‘70s, snuck onto lots, changed threads throughout filming, and didn’t have his top star (John Huston) until years into filming. Whole threads changed. Actors were cast, re-cast, and reset.

In a great bit, Peter Bogdanovich of The Last Picture Show is shown on camera with Welles in the early ‘70s as a Jerry Lewis-like fan, only to become a sexy, turtle-necked protégé of Huston when the film hit the mid-‘70s. Creative difference. We see how Welles could make erotic gold in the form of car sex scenes…by having underpaid aides sprinkle a car with hoses to fake rain and motion. Did we mention that Welles shot said sex scene over several years and locations, due to money issues? That’s the kind of can-do kid Welles was, and in his fifties no less.

But there’s a dark Orson here as well. Someone whose light shone bright on those he loved, with a cruel and Charles Foster Kane-like ability to turn on those who didn’t adore him, or those who challenged him. Watch for stories of Rich Little being cast and thrown aside. Similar stories of Bogdanovich’s faded love for Orson are explored. Welles getting filmmakers drunk so he could film arguments is a stroke of genius, or perhaps sociopathic. Orson the failure. Orson the baby-faced prodigy. Orson the cinematographer, editor, writer. Orson the Muppet Movie cameo. Every side of his late era is on display for consideration here.

Neville, for the most part, captures everything with a giddy cave-hunter’s mentality. He’s able to show the ins and outs of what it takes to make a movie on the fly. The wicked passion, the spite and energy. When the studio doesn’t have your back, but the heart is there, do things the Welles way, Wind suggests. Film little by little. Look for happy ‘accidents’, as Welles puts it at one point. In that regard, They’ll Love Me When I’m Dead is a curiosity.

Karp-e Diem: Chicago writer Josh Karp is a producer, and his book Orson Welles’s Last Movie seems to be the groundwork for Neville’s doc. While there’s no ‘written by’ or ‘based on the book by’ credit listed here, one assumes Karp was a guide, or an inspiration at the very least.

It’s an important distinction, as one’s like or dislike of They’ll Love Me may come down to approach. Karp’s book is pragmatic and a little more analytical, while Neville coifs the story with touches like Alan Cumming’s camera-directed narration and long, ponderous shots of Welles in thought. Cinematic license, perhaps. At its worst, it can come off as a showy attempt to approximate Orwellian braggadocio. At best, it’s a functioning homage. It’s certainly up for debate.

However, Karp’s book is nigh perfect in its account. No, this is is not about what’s better between the book or documentary; Neville’s film doesn’t appear to be a strict adaptation. But the book has more fun with the little stories, and delivers a dryer, more exacting recount. The little side-trips (Welles’ failed shrimp diets, quotes about whoring himself in commercials, the director bemoaning how fat he’s gotten when he sees himself on TV) make it a fuller, richer read. Neville swings big, but Karp laid some pretty thorough groundwork just a few years back.

The Verdict: When Neville chronicles the failed work of Orson Welles, They’ll Love Me When I’m Dead comes alive with newsreel tabloid verve. Welles the creator, the crank, the guy just trying to make a damn movie while set back by unbelievable circumstances. It’s great viewing, and the need to deify Welles’ doggedness seems unnecessary. But that’s the nature of heroes. We strive to impress. So Neville over-layers, with avant-garde cinematography of the involved parties, or with showy interjections in the narration. Which, as nicely produced as it feels, feels like fakery atop the subject. The Other Side of the Wind’s doomed making is captivating enough already.

Where’s it Playing?: Netflix, on November 2nd, released in tandem with Welles’ The Other Side of the Wind. Watch Wind first, though. Then watch Citizen Kane, The Magnificent Ambersons, The Third Man, and about a dozen other Welles films. Hopefully they’re streaming somewhere.