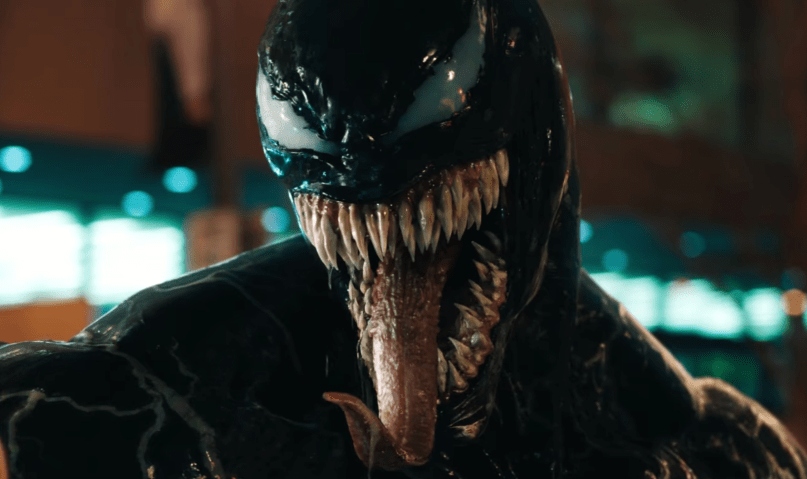 The Pitch: In a Spider-Man universe that notably lacks the venerable wall-crawler, investigative reporter Eddie Brock (Tom Hardy) begins turning his Vice-like journalistic tendencies toward slimy tech mogul Carlton Drake (Riz Ahmed), CEO of the Life Foundation. You see, it turns out he’s been studying some mysterious, gloppy alien symbiotes that crash-landed to Earth on one of his company’s space expeditions. Over the course of his investigation, Eddie loses his job and his fiancée Anne (Michelle Williams), but gains a new friend when one of the symbiotes merges with him. Foul-mouthed, snarky, and hungry for human flesh, Brock must find a way to coexist with this creature before it murders him – and just maybe save the planet in the process.

A Turd in the Wind: Back in the halcyon days of superhero filmmaking, before Kevin Feige and Marvel Studios changed the tide toward cinematic universes that strove for a certain prestige appeal, let’s face it – comic book movies were kind of dumb. Venom, a film spawned in The Year of Our Lord 2018, is one more such film. Venom feels like it crash-landed to our planet from the year 1997, a sibling to the murky messes of comic book eras past. It’s Spawn and Steel and Blade in equal measure, both for good and ill.

It’s hard to tell where to start with the tonal and structural messes inflicted on Venom’s audience by Jeff Pinkner, Scott Rosenberg, and Kelly Marcel’s weird script and Ruben Fleischer’s (Zombieland) incoherent direction. The first act is a slog of mismatched character beats that takes far too long to get to the real goods of Venom’s introduction, and the third act slots too cleanly into the big setpiece filled with “Let’s Go Save the Planet” nonsense. The whole point of Venom is that he isn’t a superhero – he’s a malicious parasite (but don’t use that word in front of him), who bonds to Brock because they’re both, in Venom’s words, “losers.”

But the demands of superhero filmmaking require a big good vs. evil dust-up at the end, so Venom’s mind is changed for virtually no discernible reason than to serve the spectacle. It’s unclear who told Fleischer that the best way to shoot a set piece between two black-grey blobs of CG was “up close” and “in the dead of night,” but the action for Venom is mediocre at best. The weightless action isn’t helped by the film’s PG-13 rating, either, which renders one of comics’ grimiest characters effectively toothless.

Hardy Boy: At the center of this mess, however, is a Tom Hardy performance that must be seen to be believed. The culmination of a decades’ worth of Tom Hardy roles where no one told him “you can’t pull off that accent, mate,” his Eddie Brock is a shambling, dead-eyed douchebag who wears beaded bracelets and speaks in a marble-mouthed New York accent that makes John Travolta in Gotti feel positively authentic.

That said, it’s an eminently watchable performance in that Nic Cage kind of way, filled with a manic energy that’s only exacerbated by the Jekyll and Hyde antics he falls into after Venom takes over his body. When the film gets out of its own way and lets Hardy flail his arms about and scream bloody murder in the second act, Venom paradoxically becomes a hell of a lot of fun.

The Verdict: Like its title character, Venom is a curious, capricious creature that feels like it came from an entirely different world. It’s tame when it ought to be gory, earnest when it should be transgressive. The supporting cast is swallowed up in a dim, murky mess of exposition and cartoonish grandstanding, eclipsed by one of the most bizarre, interesting performances of Tom Hardy’s career. To be honest, Venom’s almost worth watching for Hardy’s bizarre accent and whirling-dervish mania alone, but it’s a shame he’s not surrounded by a better, more exciting film.

Where’s It Playing?: Venom slithers its way into theaters to challenge the Oscar-hungry A Star Is Born this Friday, October 5th.