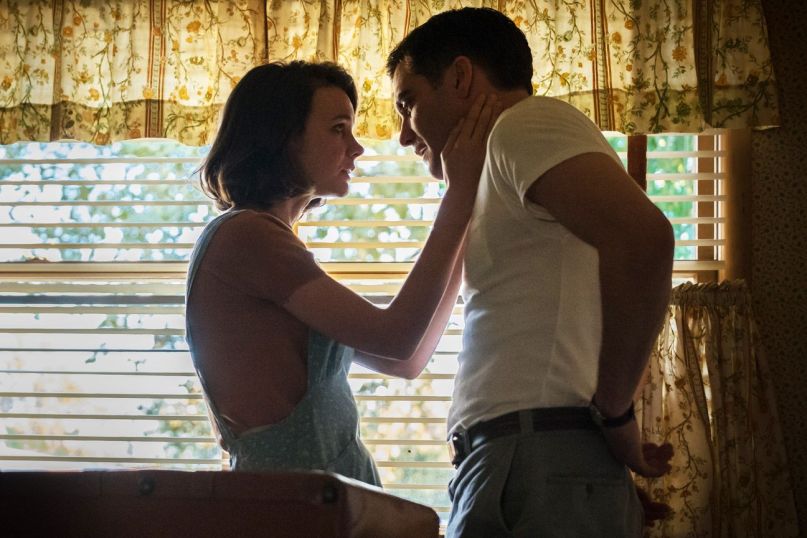 The Pitch: In a sleepy Montana town in the 1950s, a nuclear family is beginning to melt down. Jerry (Jake Gyllenhaal) loses his job as a golf caddy for being “too well-liked,” and the ensuing economic anxiety leads to simmering resentment from his wife Jeanette (Carey Mulligan), especially after Jerry takes a long-distance job as a rescue fireman in the Montana forests. These seismic shifts in their relationship are exacerbated as Jeanette begins to forge a new relationship with family friend Warren Miller (Bill Camp). All the while, their son Joe (Ed Oxenbould) observes these confusing, subtle changes to the fabric of his family, helpless to do anything but reflect on what these dynamics mean for his own budding manhood.

Forged in Fire: Much like his tempered onscreen persona, Paul Dano’s directorial debut is quiet, considered, and deeply sensitive. Adapted from the novel by Richard Ford (with a screenplay co-written by Dano and partner Zoe Kazan), Wildlife is a quintessentially textured piece of subversive Americana, cynical about the Greatest Generation’s ability to manifest the impossible standards of happiness advertised by the post-nuclear age. It’s Douglas Sirk by way of Terence Davies, a bittersweet coming-of-age tale about people who have the American Dream, but who remain unhappy. Imagine the Brad Pitt segments of The Tree of Life playing out like an A24 film, and the result is uncannily close to what Dano accomplishes in Wildlife.

At all turns, Dano uses the film’s 1950s setting to solidify the yearning tragedy of its characters. Diego Garcia’s stark, amber-coated cinematography and Amanda Ford’s evocative costume work evoke the paintings of Norman Rockwell, disrupting these American idylls with uncomfortably emotional close-ups and frigid wide shots of characters running away from/toward scenarios. From the start, the Montana landscape is used beautifully as a signpost for the family’s bubbling tensions: forest fires encroach from afar, gentle snowfall accompanies Joe’s late-film visit to his father, and Jeanette’s swim classes at the YMCA surround her with the cleansing, restorative power of water. Wildlife is an elemental film, its sparse kitchen-sink drama bolstered by the constant presence of Mother Nature.

“What’s a Man Entitled To?”: All of Dano’s intricate visual work is, of course, in service to his primary cast, who all deliver impeccably understated performances. Gyllenhaal is perpetually at home in this kind of period persona (his Jerry combines the aw-shucks naivete of his work in October Sky with the kind of bottled-up frustration he releases in Jarhead). He’s a man aggravated by his inability to care for his family, and somewhat ahead of his time in his emotional sensitivity – at one point, he asks for a platonic kiss from his son before leaving him at school, saying, “you know men love each other too, don’t you?” As Jeanette’s new paramour, Camp maintains his status as the MVP of any supporting cast he’s in, his furtive, well-meaning Walter making a small but vital impression on young Joe in their few nervous interactions. While the relative newcomer in the cast, Oxenbould makes for a fine viewpoint character, acting as the cipher upon which this familial drama is imposed. It’s far from a showy role, but Oxenbould’s stoic face and unique sense of stillness make him a perfect mirror for Dano’s exploration of the disillusionment of the American family.

But of course, the film is Mulligan’s to run away with, and that she does. Evoking the same kind of put-upon American housewife she played in Mudbound, Mulligan refines that character type into something dynamic and fascinating once again. Jeanette’s motivations and frustrations are familiar to anyone who has seen All That Heaven Allows or Carol (or generally being a woman living in America) – stifled by gender norms that prevent her from seeking her own happiness, whether through a job or a new, exciting paramour, she quickly turns bitter and acerbic. Mulligan’s pursed lips and half-lidded glances match perfectly with her occasionally acidic tongue, her Jeanette a refreshingly candid commentator on the limited options women like her often get. “If you’ve got a better plan for me, tell me – I’ll try it,” she snaps at Joe at one point. He may not like his mother getting involved with a new man and disrupting the family he grew up around, but what is a young woman with few prospects supposed to do? In manifesting this understated sense of feminine rebellion in the man’s world of the ‘50s, Mulligan’s performance is Wildlife’s true showcase.

The Verdict: With Wildlife, Dano joins the likes of Jonah Hill and Bradley Cooper as actors who put forth surprisingly solid debut features in 2018. As a tragic snapshot of a period of American history many look at through rose-colored glasses, the film is filled with sensitive performances that help to upend the fantasy of the nuclear family as the cure for society’s ills. It’s a sparse but stunning mood piece, and a wonderful showcase for Dano as a uniquely family-driven auteur.